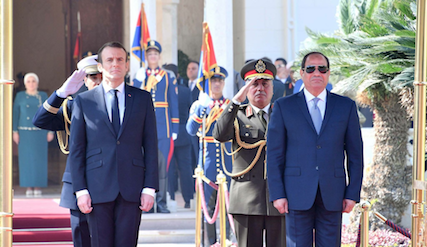 President Abdel Fatah Al-Sisi stressed the necessity to achieve sustainable development and protect human rights simultaneously within a comprehensive framework, during a Monday joint press conference with the French President Emmanuel Macron who is currently on a three-day visit to Egypt.

“The rights to live safely and enjoy freedom of expression are inseparable and are highly valued by Egypt,” President Al-Sisi said, adding, “terrorism, racism, and hate crimes are rising in Europe and the Middle East region. However, this should not obstruct us from continuing development.”

The two presidents held a press conference in Cairo, following the signing of several economic agreements, where they talked about international and regional issues of mutual interest as well as human rights.

Answering journalists’ questions on human rights and NGOs in Egypt, Al-Sisi said, “Egypt will not be built by bloggers. We are undertaking political, economic, and social reforms. We are working on promoting citizenship and tolerance.”

Speaking of Egypt’s reforms and internal affairs, he pointed out, “When the state works on providing a decent life for more than 250,000 families, it eliminates causes of extremism and terrorism in the country, especially as we are working on promoting the values of citizenship and coexistence.”

For his part, the French president said that the real success of Egyptian president comes from his success in economic, social, intellectual, and academic fields, and that he has never underestimated the difficulties in rebuilding the state institutions and developing the local economy.

Macron added that his visit to Egypt is very important and presents an opportunity to strengthen the bilateral relations, stressing his respect to the decisions that concern Egypt’s stability.

Al-Sisi said that the two countries share strong historical ties based on mutual interests, humanitarian and cultural interactions between the two peoples, and that he agreed with Macron on the need to enhance economic cooperation and to increase the volume of trade exchange and investments to reflect the deep political and strategic relations between Egypt and France.

Both officials witnessed the signing ceremony of various agreements and memorandum of understanding for cooperation in various fields, such as transport, health, culture, education, communications, youth, internal trade, and energy. They also tackled a number of regional issues, including the Syrian and Libyan crises.

“We have discussed ways of enhancing cultural and educational cooperation between Egypt and France, and we agreed to continue joint work to eliminate terrorism,” Al-Sisi noted.

Earlier on Monday, Al-Sisi, accompanied with the Egyptian first lady, received the French president and the French first lady at the Ittihadiya Presidential Palace.

On Sunday, Macron visited Aswan where he took a tour in Abu Simbel Temple.

This is Macron’s first official visit to Egypt since assuming office in 2017. It marks the start of ‘France-Egypt 2019,’ which was launched earlier this year by El-Sisi and his French counterpart to commemorate the 150th anniversary of the opening of the Suez Canal.

Al-Sisi has visited France in October 2017, where he met with Macron and discussed joint efforts to combat terrorism, the situation in Libya, and issues related to bilateral cooperation.