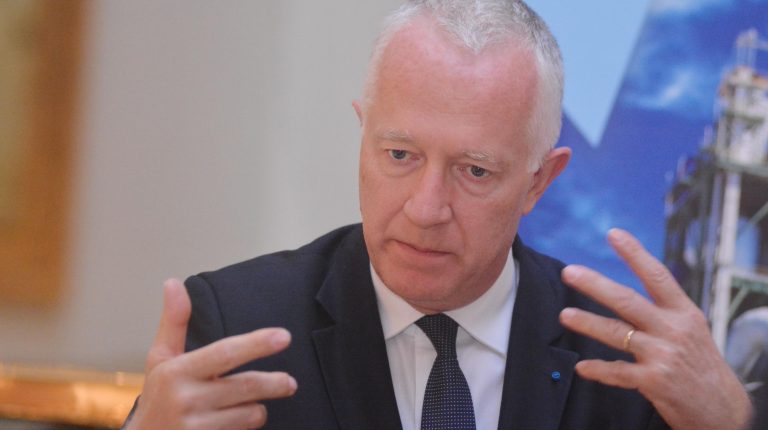 Jacques Merceron-Vicat, honorary chairperson of the Vicat Cement Group, said that the Egyptian economy is taking positive and steady steps forward, thanks to the policies adopted by the political leadership over the last four years. He also praised the parliament’s approved laws which have corrected and improved the investment climate, therefore it succeeded in attracting more foreign and Arab investments into the Egyptian market. He informed Daily News Egypt that the company is committed to staying in the Egyptian market even in the most difficult conditions, when the state was facing terrorism in Sinai.

“Day after day, we were confident that stability will once again prevail in Sinai,” he stressed. This is what took place thanks to the great efforts exerted by political, military, and security leaders in Egypt. “I therefore emphasise that we are remaining in this country to support its national economy,” he added.

Guy Sidos, chairperson and CEO of the Vicat Cement Group, described the Egyptian market as a one with the tools and the means to withstand all the obstacles it faces. He highlighted Vicat’s pride regarding its presence in the Egyptian market, and the successes it has achieved for 15 years since it started its investments in Egypt in 2003, through its partnership with the Sinai Cement Company.

DNE interviewed the Vicat company decision makers, the transcript for which is below, lightly edited for clarity:

We would like to know more about Vicat International, can you elaborate?

The company was established in 1853 by Joseph Vicat. It is a family-owned company with its headquarters in Paris. Vicat is currently led by the seventh family generation, who are developing the group and all its branches across the world in order to provide the best materials used in the construction industry to remain concurrent of the great progress the world is witnessing in this industry.

Who is Joseph Vicat?

Joseph Vicat is the great grandparent of the family, who discovered the composition of the present cement mixture over 160 years ago, which is one of the most important inventions in the history of humanity. He offered it to the world for free, as he believed that his invention represents a humanitarian and civilisational value which cannot be monopolised. Vicat shared this invention to participate in the renaissance and development of several nations over a century and a half ago. At Vicat, we are extremely proud of our long history and Joseph Vicat’s invention.

After all this experience, how did you develop?

Vicat Group is one of the world’s leading companies in the cement industry with more than 160 years of experience. It has participated in a substantial number of construction projects around the world, in addition to its efforts to reach new discoveries which can contribute toward the improvement of the industry.

The year 1974 marks a major turning point in Vicat’s success when it acquired the US-based Ragland Cement Plant, which was the first step in the group’s global expansion strategy.

What are your other expansion locations?

Vicat’s expansion plans for the cement industry so far include 12 countries worldwide. For example, we started investing in Turkey in 1991; Senegal in 1999; Switzerland in 2001; Egypt since 2003; Mali in 2004; Kazakhstan since 2007; India and Mauritania in 2008, in addition to Italy and the United States.

When did you decide to invest in Egypt?

Vicat decided to invest in Egypt in 2003, when the board of directors of Sinai Cement asked Vicat to enter as a partner for its competence and reputation throughout the world. Back then, the Egyptian market was one of the most promising markets in Africa and the Arab world. Therefore, we decided to invest in it following comprehensive studies which confirmed its strength, diversity, and ability to expand.

How do you view the current situation of the Egyptian market?

First of all, we emphasise our great confidence in the Egyptian market, and I think that the difficult times have passed, and that in the coming period Egypt will be able to harness the benefits. The Egyptian economy has the tools and capabilities which enable it to withstand and overcome all the obstacles in its way, and it is taking positive, solid steps forward in view of the courageous corrective decisions taken during the last four years.

An important factor which has greatly improved the investment climate in Egypt is the availability of political leadership, the important measures taken by the government, and the economic laws approved by the Egyptian parliament, which provided Egypt with an attractive environment for investment-all confirmed by figures from international financial institutions.

How did you face the recent crisis in Sinai during the escalation of the war on terror?

We believe, like the Egyptian people, that Sinai is indeed the land of turquoise. It is God’s paradise on earth, so we did not abandon Egypt even in its most trying circumstances, although we suffered quite a few losses during that period of time. Day after day, we were confident that calm and stability would return to Sinai once again. This is what took place thanks to the great efforts exerted by political, military, and security leaders in Egypt. I therefore emphasise that we are remaining in this country to support its national economy.

What are the future plans that you intend to accomplish in Egypt?

To begin with, I would like to point out that Vicat has invested over €200m in the Egyptian market since its entry into the Egyptian market. We have an extensive vision of the Egyptian market. We are considering pumping €30m in the coming period to develop the Sinai Cement Factory, as it is the main company stakeholder. We also aim to expand vertically and horizontally, both in terms of production or organisationally to cover all the requirements of the local and regional markets.

What is your role in community service in Sinai?

Vicat is a family company and we understand the importance of development of the communities in which we work. We consider every market we invest in as part of us, so we aim to develop it. Community service is at the top of Vicat’s global priorities. Since our presence in 2003, we had various successful initiatives which benefited plenty of Sinai people. These initiatives were carried out through the Sinai Cement Company and factory, not directly on behalf of Vicat. During the past period we have conducted detailed surveys and in-depth studies to identify the services we can provide in this area to the people of Sinai, especially after calm and stability has been re-established. Currently, we are considering a number of options which are available to us to provide more support to the people of Sinai.

How do you comply with environmental standards at Sinai Cement?

One of the main priorities of Vicat-Egypt is the application of international standards and environmental requirements for the cement industry. This approach is adopted by Vicat’s global strategy and we use the latest scientific research to avoid damaging the environment. You can see this through your visit to the factory, in addition to the strict supervision of the state agencies in this sector.

Can you tell us about Vicat’s products?

Vicat produces various types of cement and concrete mixtures which are suitable for all projects and are compatible with different environments, temperatures, atmospheric pressures, wind, and water. This includes Portland cement, Portland composite, Blast furnace cement, Slag cement, and Pozzolan cement, as well as various types of concrete.

What are Vicat’s most important projects?

Vicat has contributed to several major projects worldwide, which have been directly dependent on our products: hydroelectric power plants in Dumlupınar and Bukakisla in Turkey, where over 66,000 tonnes of cement have been used in construction.

There’s equally Saint-Gervais in France; the covered market in Poulencrain, France; the Mesolls tunnel in Switzerland, and the Mediterranean Palace in Nice, France.

Vicat Group takes pride that it was founded and has continuously expanded under the designation of Louis Vicat, the inventor of cement. The group managed for over 160 years to preserve the family spirit, appreciative of what their grandfather presented to mankind. The seventh generation of Vicat grandchildren are now managing the group. They were able, through continuous research, to enhance the products and cope with the latest construction technologies, in order to contribute to the development of various nations around the world.

Vicat produces a large variety of products including cement and concrete mixes that suit all types of projects. They also suit various environmental conditions, temperatures, and air pressures. The products include:

Vicat Group participated in a large number of substantial projects all over the world which directly depended on their products.

The group operates in more than 11 countries around the world.