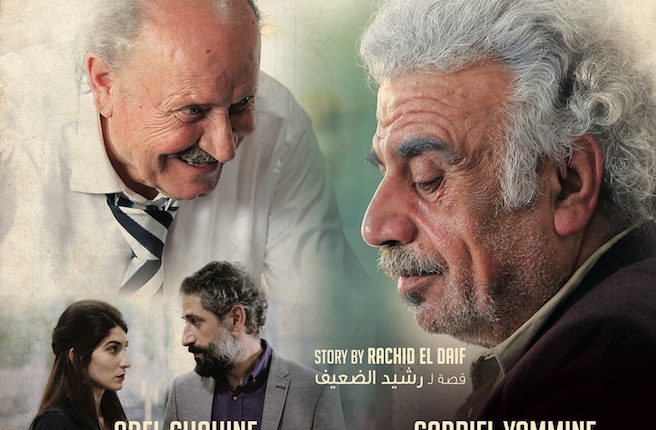 If you are fan of Jim Jarmusch’s Coffee and Cigarettes (2003), or Elia Suleiman’s sarcasm style, then Bahij Hojeij’s film Good Morning (2018) is for you.

Set in one location, a coffee shop overlooking a small street in Beirut, with a few typical coffee shop customers, we listen to a criticisms of history, life, and jokes.

There are four main characters in the film: the retired old general, his old army doctor friend, Salim the intellectual, and Ghenwa the waitress. They meet every morning, without any agreement or intention, they sit separate from each other, but they intersect during the day in mini dialogues.

The two old men are just killing time, and they call solving crosswords in the newspaper as “their work.” Here we notice a smart insertion of the crosswords itself, as they are a dramatic justification for the protagonists to talk about many issues triggered by the words. While Salim spends time reading on his laptop, he also seems to be in love with Ghenwa.

In the symbol-filled film, the two old men seem to be afraid of losing their memory, and younger Salim reminds them of things they had forgotten. The old men do not read electronic newspapers, and they keep forgetting a lot of what they have been taught or knew, and also who criticized the current situations of young guys talking English with their colleagues, as they continue recounting old jokes that nobody laughs to.

Salim, alongside Ghenwa, represent the new generation, hoping for better circumstances, for finding love no matter the religious differences between them. They are more concerned with having a quiet life, while Ghenwa, the optimistic one, dreams of travelling to Paris, or Tokyo. Pessimistic Salim tells Ghenwa that there is no quiet place in the world.

The coffee shop overlooks a street, where together with the protagonists we notice a building being demolished, cars going the wrong way, Syrian refugees sitting on the sidewalk, and graffiti depicting the face and poetry of the famous late Palestinian poet Mahmoud Darwish.

The film makes silent observations of things happening, and leaves the spectator the freedom to think about all of the discussions provoked by situations surrounding the coffee shop.

In the variety of topics raised, there is one constant action: the “Good Morning” greeting of the protagonists, repeated every day, no matter what.