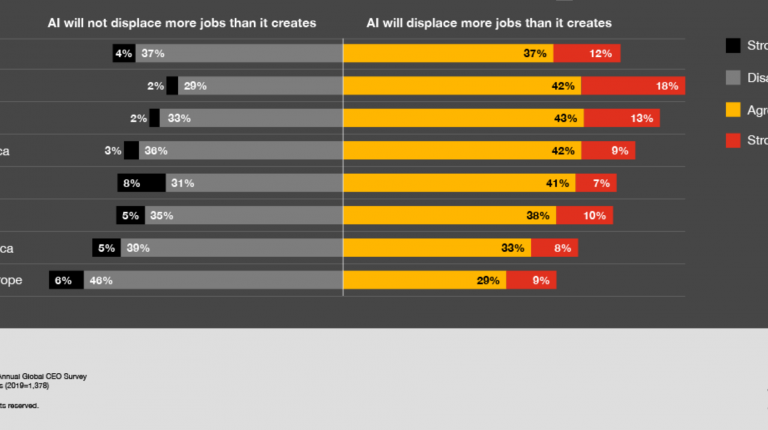 Following an increase in Middle East CEOs optimism last year, a decline in confidence in the region’s growth potential was witnessed in this year’s edition of PwC’s 22nd CEO Survey, launched at the World Economic Forum annual meeting in Davos.

According to the survey results, only 28% of Middle East CEOs was “very confident” of revenue growth over the next 12 months compared to 33% last year, and 35% of global CEOs. Meanwhile, for medium-term growth, 40% of survey Middle East respondents are ‘very confident’ about their revenue prospects over the next three years.

Middle East CEOs are also more pessimistic about the short-term global economic outlook for 2019 than their global peers (28% vs 42%).

Operational efficiency was selected as a priority for 68% of Middle East CEOs, at the top of their list of planned activities driving profitability in the next 12 months, in line with their global peers with 77%.

Furthermore, 43% of the region’s business leaders expected their headcounts to fall, compared to 19% globally.

“Some of the crude cost-cutting in the region in 2015-2017 had cut into muscle, and with improving economic conditions last year, some pressure came off.  We are now seeing a far more strategic, fundamental look at efficiency within businesses, where they are looking to leverage technology to sustain a lower cost base,” Stephen Anderson, Clients and Markets leader at PwC Middle East commented.

Regarding growth potential, Saudi Arabia is firmly on the minds of CEOs based on other regional areas, cited by 28% of respondents as the most important country for growth, followed by Egypt with 15%, India 13%, and Iraq with 10%.

According to the survey, 79% of regional CEOs rank changing consumer behaviour considering digitisation taking over at maximum speed as the most significant threat, followed by technological change at 75%.

Furthermore, 91% of Middle East CEOs believes that artificial intelligence (AI) will significantly change how they conduct business in the next five years, in line with global results. Although 43% has plans to start introducing AI initiatives in their organisations in the next three years, only 23% has already introduced AI into their businesses, half the proportion globally.

Middle East CEOs strongly believe data and skills are holding their organisations back, as only 13% of regional CEOs believe the quality of their company’s data is adequate for assessing customers’ preferences and needs, compared to 41% amongst global CEOs. While 61% of regional CEOs cited lack of analytical talent as the primary reason, they do not receive adequate information.

Hani Ashkar, Middle East senior partner at PwC, believes that data analytical skills are in high demand. As an organisation, it needs to invest in and up-skill its employees, in order to reap the benefits of an investment in digital technology, allowing companies to deliver quality services which drive growth.

Anderson concludes, “Successful Middle East CEOs will be those who can drive competencies to become fit for the new lower growth regional realities, and free the required investment to transform their businesses to get ahead of ever increasingly fast paced disruption. They must do all this while inspiring their employees to ride the digital up-skilling journey vital to fuel transformation. Who would want to be a CEO?”

Only 61% of companies believe their last acquisitions create value: study