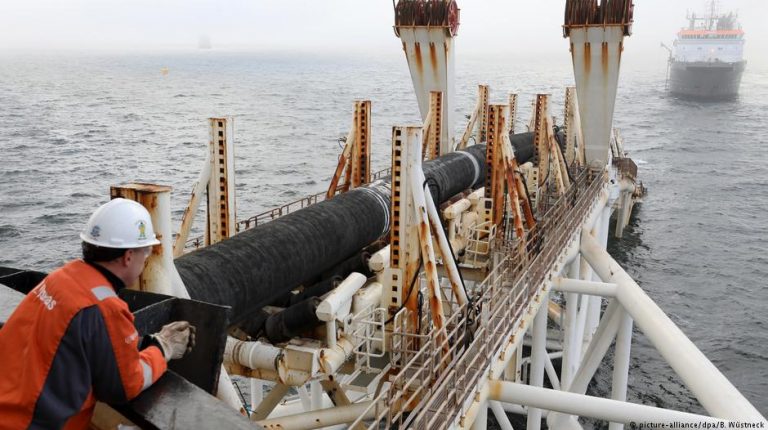 Russian gas will be piped direct to Germany from November despite the project’s detractors, a project engineer has asserted. Critics have said Europe will be left vulnerable and climate goals will be undermined.Russia's second natural gas pipeline across the Baltic seabed to Germany is just months away from completion, despite warnings from the US, Ukraine, Poland and Lithuania and the EU commission over Europe's energy security.

Klaus Haussmann, engineer at Nord Stream 2's future landfall site at Lubmin on Germany's Baltic Sea coast told German public radio station Deutschlandfunk that the "raw" laying of the pipeline would be finished by the middle of 2019.

"Then comes the entire installation of the electrical equipment, security chains. And, then it's planned on the large scale that we get the first conduit filled with gas in November, from Russia," said Haussmann.

Nord Stream 2 — in fact two welded conduits, each with an inside diameter of 1.2 meters (4 feet) and largely following the route of Nord Stream 1 (operational since 2011) — will pipe Siberian gas via Russia's Leningrad region, tracking 1230 kilometers (764 miles) across the Baltic seabed, through Finnish, Swedish and Danish maritime waters, to northeastern Germany.

Along its trajectory, environmentalists including Friends of the Earth claim that seabed wildlife will be "irreparably damaged."

Just before Christmas, Nord Stream said 370 kilometers of pipeline had already been laid and special construction ships and their crews were "proceeding according to plan and on schedule" into Swedish waters.

Haussmann told DLF his concern was more the impact of the Baltic's winter weather and waves on construction at sea and less so the international pros and cons.

"For two years or more, Nord Stream 2 has been pretty much under fire. But at the moment we have more worries with the weather outside," he said.

The avoidance of land and thereby transit fees has long angered Ukraine and Poland as well as Lithuania, which in 2014 at its Baltic Port of Klaipeda opened a terminal suitable for Liquefied Natural Gas (LNG) from the USA and Qatar.

In early January, US ambassador to Germany Richard Grenell threatened sanctions against German firms involved, prompting Berlin to reply that "nothing had changed" and the project had its permits and proceeding.

"We're not that easy to impress and intimidate," said Economy Minister Peter Altmaier, adding he was open still to discussions with American LNG exporters.

The Nord Stream 2 venture, owned by Russia's Gazprom, based in Switzerland, and funded by five concerns, including Germany's BASF/Wintershall and Shell of the Netherlands and fronted by former German chancellor Gerhard Schröder, claims the EU can make savings on carbon dioxide emissions by switching to gas instead of coal-fired generation of electricity.

Last May, Schröder accused American exporters of sourcing their LNG from fracking and trying to undermine Nord Stream 2, adding that Europe had a basic interest in obtaining "extra natural gas from Russia."

German Greens politician Jürgen Trittin — referring to renewable energy capture such as solar and wind — told DLF that while he was not an advocate of the pipelines, Gazprom had speculated on the "failure of an active Europe climate policy."

"If we were serious about climate protection, then the €10 billion ($11.4 billion) Gazprom is now sinking into the Baltic Sea would possibly be money wasted — I wouldn't be sad about that!"

On the parallel issue, Trittin said he shared the view of Chancellor Angela Merkel's government that Europe also needed to invest in Ukraine's transit gas network — especially in the wake of Russia's 2014 seizure of Crimea.

Even a completed Nord Stream 2 would not suffice in terms of Europe's needs for gas imports, Trittin asserted, adding that he understood anger over Crimea.

Calls to cancel the already approved pipeline had not been fully thought through, Trittin added, because termination would result in "billions in damages paid to Gazprom."