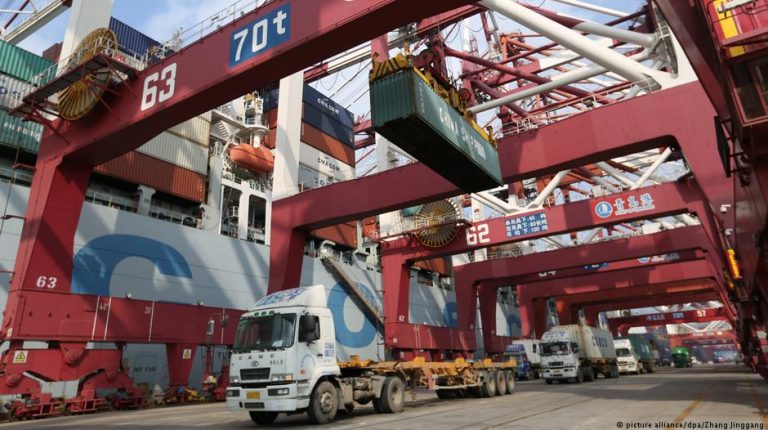 Trade talks between the United States and China will continue in Washington this week. The big question is just how far the two sides are from an agreement. The US is certainly sending contradictory signals.It's an emotional roller coaster — and it has been like that for months. One moment it seems like an open trade war between the US and China is inevitable, and then more optimistic signals are sent out, often in the form of a tweet by Donald Trump. Last week, the US president was satisfied with the state of talks so far, saying he was convinced that China would like to come to an agreement.

But US Commerce Secretary Wilbur Ross struck a different tone, not expecting a quick settlement in the trade dispute with China. According to Ross, a solution was still "miles away" as he stepped on the euphoria brake just a few days ago.

No deal in sight

But Michael Pillsbury, Trump's external trade adviser, has already said that a final settlement cannot be reached with this week's talks. The China expert is considered a hawk when it comes to US policy toward the Chinese and, as the director of the Center on Chinese Strategy at the conservative Hudson Institute, is said to have a very close link to the president.

The institute, which is conveniently located very close to the White House, allows Pillsbury easy access. And he cannot imagine that a trade agreement between the US and China will be made by the end of January.

Not only that but on Monday, the US Justice Department stepped up its fight against China's Huawei and announced indictments against the company and its CFO Meng Wanzhou. The timing of this case will only make a deal more difficult in an already strained relationship.

Time is running out, though, because the peace agreed on the sides of the G20 meeting in Buenos Aires in December by Trump and Chinese President Xi Jinping is only in place until March. If there is no agreement on trade by then, Trump has promised to extend the punitive tariffs to almost all Chinese imports — worth about $500 billion (€438 billion) in total.

The US president has always been bothered by the huge US trade deficit with China. He accuses Beijing's leadership of unfair trade practices, illegal subsidies and theft of intellectual property.

Meanwhile, China's trade surplus with the US has surged 17 percent since 2017 to $323 billion last year, according to Reuters. Despite some drastic punitive tariffs on Chinese goods, Chinese exports to the US increased by 11.3 percent in 2018 alone compared with the previous year, while imports from the US into China grew by a modest 0.7 percent in the same period.

From washing machines to electric cars

The first punitive tariffs were imposed by the US in January 2018 on Chinese washing machines and solar panels. This was followed in March by import duties of 25 percent on steel and 10 percent on aluminum. Then in mid-June, the US added more punitive tariffs of 25 percent on thousands of goods, mostly technology products, to compensate for the damage caused to the US economy by China's intellectual property infringement and forced technology transfer.

These tariffs are aimed primarily at products from the Chinese initiative "Made in China 2025," and include aircraft construction, robotics, mechanical construction, vehicles such as electric and hybrid cars, and information and communication technologies.

One day later, China hit back and also added import duties on $50 billion worth of US goods like agricultural products, automobiles, and food products such as soybeans, seafood or meat.

In September, the US once again one-upped China and pushed the volume of punitive tariffs to a total of some $250 billion, or about half of all Chinese imports to the United States. These new tariffs of 10 percent should have increased to 25 percent in January 2019, but the "truce" agreed in Buenos Aires has hitherto prevented this.

Despite this, Trump has already repeatedly threatened to impose further punitive tariffs on goods worth more than another $260 billion. And if other countries "don't play fair," they too will have to pay more customs duties, Trump has tweeted.

Recently there have been more signals of a return to normality, though. As of January 1, 2019, China lowered the import duty on American cars and vehicle parts from 40 to 15 percent. However, according to Beijing's Commerce Ministry, the scheme is only in place for three months. China also resumed US imports of soy in December, with shipments expected to arrive in Chinese ports during the first quarter of 2019.