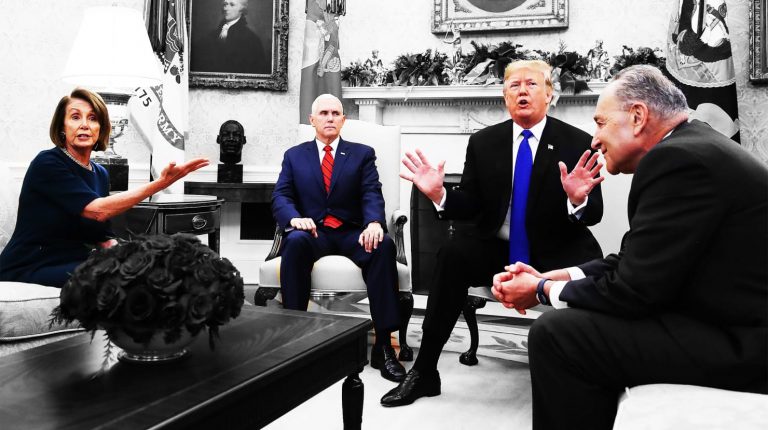 After a 35-day federal government shutdown, the longest in the US history, President Donald Trump has bowed to pressure and reopened the government on Saturday.

Trump reopened the government to reach a deal with the Democrats, after they have announced their willingness to reach a serious deal, however, Trump informed the Wall Street Journal that the Congress must agree on a new bill by 15 February in order to avoid another shutdown.

To save a face, Trump tweeted, “This was not a concession in any way. It was taking care of millions of people who were getting badly hurt by the shutdown with the understanding that in 21 days, if no deal is done, it is off to the races!” The US economy has already lost about $3bn due to the government shutdown.

Noteworthy, during the government shutdown, Trump served fast food for the national football team due to the shutdown, while the White House announced that Trump is personally paying for the event, and will cater to everyone’s favourite junk food. The reason behind this, is that the White House’s staff, who caters for such events, is furloughed, with about 800,000 federal employees were forced to have unpaid leaves.

Apparently, it seems like Trump may shut down the government again for years if the Congress does not reach a solution for building the border barrier, as Trump said, “As a presidential candidate, I promised I would fix this crisis, and I intend to keep that promise one way or another.” This means that he is never backing off from his target to build the wall, “It is the Democrats who are keeping everything closed,” Trump tweeted. Yet, he does not see that he is part of this ongoing crisis.

“Definitely Trump’s impeachment will affect the Egyptian market,” a senior Economist at Sigma Capital Holding, Eman Negm, told Daily News Egypt, adding that not only the Egyptian market will be affected by the impeachment and the volatile political environment of the US, but the whole global market will be affected as the US is the world’s biggest economy by far, representing 24% of the world’s economy.

Negm mentioned that this volatility will lead to stopping reallocation by asset managers and fund managers until they find out how the political situation will be stabilised.

The stock market is part of a globalised economy and what happens in one economy is bound to affect others, if we look back throughout history, we can see that every time the US market fell, it was followed by a fall of the global stock market, and not just the Egyptian market.

However, analysts have different opinions about Trump’s impeachment and its impact on Egypt. “Fears of slow economic growth due to the US-China trade war will come to an end if Trump got impeached and it will consequently have a positive impact on the growth outlook not just in Egypt, mainly because of economic growth in China,” said the Head of Research at Pharos Holding, Radwa El-Swaify.

She added that the Federal Reserve will probably then raise interest rates two times, which is the expected scenario before holding on to rates, the scenario that Trump was rejecting, which will obviously initially have a negative impact on emerging market currencies before sentiment improves with the halt in rate rises in the US.

Building a border barrier between the US and Mexico was one of Trump’s key promises when he was campaigning to become president. This idea divided the country, nevertheless made him win many supporters. After two years of his presidential term, he wants to fulfil this promise.

The planned 1,000-mile steel wall between the US and Mexico would be designed to prevent illegal migration from Mexico.

But is illegal migration the main reason behind building the wall?

The Washington Post published a transcript of a leaked phone call between Trump and his Mexican counterpart, Enrique Peña, in January 2017, telling him that Mexico must pay for a border wall between the two countries. Trump said the wall is more of a symbol than a national security project.

“I am just going to say that we are working it out,” Trump said. He added, “Believe it or not, this is the least important thing that we are talking about, but politically this might be the most important,” however, Peña continued on pushing back.

Building a wall of this size is going to cost a lot of money, originally, he suggested that Mexico should pay for the wall, but it was soon very clear that the Mexican government would not pay.

Now, Trump is appealing to his own government and to the US’ taxpayers in order to pay for the wall, he estimates that he would need $5.6bn to build a steel barrier across the border, but the appeal was not well received by the Democrats, so the government was forced to partially close.

This shutdown was the longest in the US history, and it seems that there may be another long one, as Trump repeatedly declared that he will not reopen the government unless he gets funding for his border wall, however, he reopened the government due to the pressure he has been facing as the Democrats are fiercely opposing him, and have rejected his requests. Moreover, polls also show that the US citizens do not agree with building the wall, but those who do, are working hardly to make their opinions heard.

Shutting down the government was not the optimal solution, as Trump’s impeachment is being discussed by the Democrats.

In the first week of January 2019, the swearing in of the new Congress was dominated by one word: impeachment.

Rashida Tlaib, a newly elected Democratic representative from Michigan, began her tenure in the Congress by saying what most members of her party are thinking about, which is promising to impeach Trump.

Trump responded by tweeting, “How do you impeach a president who has done nothing wrong?”

Yet, being impeached does not mean becoming expelled from the office. On the US federal level, it is a process whereby a simple majority vote in the House of Representatives can accuse a civil official, including the president, of an “impeachable” offense. That accusation would then move to the Senate, which would decide whether or not to convict this official.

There are almost certainly enough votes in the House to impeach Trump, and almost certainly not enough votes in the Republican-controlled Senate to convict him. Even if the entire Democratic caucus voted to convict Trump, 20 Republican senators would need to join them to expel him from office. That is an extraordinarily high barrier for Trump’s opponents to overcome.

Investors and businesses may have overlooked one big risk that could come out of Washington due to the possible impeachment of Trump, but the history reveals that stock markets often perform better with a divided government. Between 1901 and 2017. The Dow Jones Industrial Average (DJIA) returned to 10.1% annually in periods with divided government versus 9% with one party in control.

When President Richard Nixon resigned in the 1970s, and President Bill Clinton was impeached in the 1990s, the stock market took a nosedive. Nixon’s resignation exacerbated a bear market in stocks, which lasted for several years after he resigned in August 1974, but it was largely due to the oil embargo by the members of the Organization of Arab Petroleum Exporting Countries which targeted nations perceived to support Israel during the 1973 Arab-Israel war, and the US was one of the initial nations which was targeted, in addition to a rapidly rising inflation which, specifically the core consumer price index, increased from below 3% to more than 11%.

Nixon was the first case, but he resigned in 1974 before impeachment proceedings could begin. Clinton was impeached by the House of Representatives in 1998 before being acquitted by the Senate in 1999. The market responded in both cases in two very different ways. During the 12 months leading up to Nixon’s resignation, the S&P 500 index fell by 23%, while in the 12 months leading up to Clinton’s impeachment, the S&P 500 gained 25%.

Yet some analysts said that definitely Nixon’s fate did not matter to the markets, it was the global economic environment moving the markets, not politics.