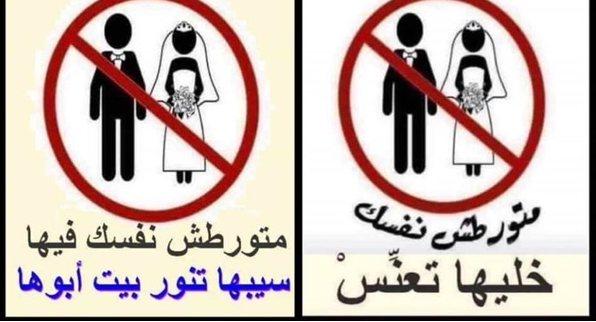 Men: “since marriage has become an expensive concept most young men cannot afford and since women are ok with that and do not want to abandon this senselessness… so ‘Khaliha Ta`nes’ (which means ‘let her become a spinster.’)

Women: “And you think that we’re going to be upset when you let us become ‘spinsters?’ Guess what?! We’re going to ululate, since you are not right for us.”

This dialogue is not an imaginary, but a realistic combative conversation that took place which recently went viral on social media platforms between Egyptian females and males under two different hashtags.

The dispute started on last Thursday when men launched a campaign called ‘let her become a spinster,’ expressing through it their dissatisfaction with the rising cost of marriage expenses.

Men used the hashtag ‘let her become a spinster’ to state that they are going to boycott Women noticed that men started using macho hashtags, and were insulting women through their tweets.

Accordingly, women in Egypt recoiled to the campaign, and initiated another campaign called ‘stay on your mom’s laps.’ The retaliatory hashtag saw hundreds of women hit back at the insults that were hurled toward them.

Therefore Daily News Egypt investigated further into this social, masculine conflict that is occurring on social media, to receive extra information regarding the opinion of the Egyptian street on both campaigns, and to reveal the reasons behind the campaigns.

Men argue that the main reason behind the ‘let her become a spinster campaign,’ is to overcome pointless marital traditions

After interviewing many men who agree with this campaign, DNE learnt that men argue that the main reason behind agreeing with the ‘let her become a spinster’ campaign is to overcome the pointless marriage traditions.

For example, 30-year-old, Mohamed Ahmed, a banker, described to DNE that when he got engaged to one of his colleagues in the bank, he was surprised when he met her father who then proceeded to demand from him, a 210m apartment in October which cost  him EGP200,000,  as well as a ‘shabka,’ -jewellery granted by the man before he is engaged to the woman he wishes to marry- worth EGP 70,000, and a dowry of EGP 70,000.

“I agreed in all these demands, however stated I was not convinced with them, but since I loved y colleague I agreed, but  then I was surprised again by a new demand which is a final dowry worth EGP120,000,” Ahmed continued.

“He insisted on the number; however I would not pay it currently since as you know it is e paid if I decide to divorce my wife. Still, I refused to write this number on the marriage contract, and I explained to him that whoever wants to get divorce will not think of money as by that time we will already have lost everything,” Ahmed recalled.

“But unfortunately, he told me ‘that’s our way of guaranteeing that our can daughter can recover her old life if she loses you through this small amount of money,” he narrated sadly.

Ahmed concluded that at the time he thought that his father-in-law saw his daughter as a commodity, and that even if a problem occurred in the

marriage, all he focused on was the money, so he decided to cancel the marriage and boycotted marriage.

“That is why I think this campaign is the only way to put pressure on families to reduce the burden of marriage on youth,” he clarified.

By telling him that this campaign is degrading to women since it characterises them with a misogynist word which is ‘spinster,’ he answered that their families own themselves call them this word if they did not marry until later in adulthood. Plus, he thinks that the hashtag was only to reach families in the same way they talk, but they did not mean to degrade women, noting that the target of this campaign are families themselves not women.

Agreeing with Ahmed, Ali Kamel, who is 26-years-old, expressed to DNE that he faced a similar problem when he proposed his colleague at university, because her parents rejected him as he did not own a luxurious apartment, nor did he have enough money.

Women backfire and launch ‘stay on your mom’s laps‘

It was refreshing to watch the aftermath of this campaign and how it was received by women, which went against men’s wildest imaginations, and revealed that women did not care.

On the contrary, they encouraged and challenged men to do so, launching on Monday a rebound campaign to reciprocate the insults that were hurled at them.

Discussing the campaign with women27-year-old journalist Hanya Fathy declared to DNE that she completely refuses completely the ‘let her become a  spinster’ campaign, explaining that this campaign humiliates women, as “women are not objects, and are not in an auction to be sold to the one who pay more,” she stated.

Meanwhile, Nour Salah, 25, also a journalist, expressed to DNE that although the campaign’s content is sarcastic yet it is intrinsically established in the term spinsterhood, which is of course completely misogynist, and makes men far removed from the idea of equality.

Furthermore, Alaa Sayed, 26, an engineer, said that if the campaign’s goal is to overcome the high cost of marriage, so men have to direct the campaign against the markets and business which control and raise the prices, instead of humiliating women this way.

Meanwhile, the Cairo Development and Law Foundation and the Arab House Research Centre stated in a joint press statement that these types of campaigns are an expression of a societal culture rooted in the concepts of violence against women through attempts to reduce them to their bodies, ignoring their roles in society, limiting their roles only to marriage, which confirms the negative stereotypical view of women.

Women’s right advocate reveals another side for the campaign

Commenting on the campaign, the founder of Women of Egypt, Alexandra Kinas, disclosed to DNE that it was launched to humiliate and degrade women, proving over and again how men are threatened by women’s equality and empowerment.

She explained that the reason is they have been enjoying rights they inherited from their ancestors, which gives them a superior status over women, certain that this status allows them to abuse women verbally, physically, financially, emotionally, etc. without being held accountable nor do they have any awareness of the damages they inflict upon women.

“Why would they want any change that would deprive them of the luxury of being a man? If you peel the layers beyond the absurd justification for the campaign, (there is no justification to use rude and humiliating label for it, no matter what) — they claimed that it was launched because men are fed up with the escalating marriage expenses,” Kinias stated.

“However, the truth is that this campaign came as a reaction to the latest amendments to the family laws proposed by the Egyptian National Council of Women, which both improve some of the current existing laws and issues news laws for women’s protection,” she explained.

“A law that forces men to submit a DNA test to prove their paternity definitely is in women’s favour. How many women are suffering to register their children born out of undocumented marriages, because the alleged father are guaranteed immunity if they choose not to take a DNA test? Do you think men will celebrate a law that would hold them accountable for their actions? A law that would make them think twice before they marry urfi and simply walk away and wash their hands of their responsibility?”questioned Kinas.

Furthermore, Kinas added that an abusive husband can no longer take his child out of the country without his ex-wife’s knowledge, just to punish her for divorcing him, as in the case we witnessed last month.

Moreover, she remarked that now a man could no longer force a woman to accept his unjust treatment because she is threatened he would steal her child from her. A wife should not be forced to stay in a dysfunctional abusive relationship because the threat of being thrown out in the street looms over her head. You see, the new proposed law empowers women and that did not sit well with men. So, their defensive instinct immediately launched a campaign that humiliates women. That is what they are used to, and that is why women should not rest until they get all their rights.

The founder of Women of Egypt stressed that women’s awareness of their rights and the important roles they are playing in society is increasing, and along with their financial independence, they are realising that they are no longer looking for a husband just to find someone to support them, but rather more of a life partner.

“In other words, men’s tricks didn’t work this time and the obnoxious campaign not only died within hours after it was born, but men were dissociating themselves from it. It stigmatised those who approved it,” Kinas asserted.