It was back in 1840 when the first bride decided to begin one of the most momentous walks in her life while dressed in white. Queen Victoria chose the heavenly colour, then it became history afterwards. Since then, women around the world are opting this minimal colour on their big days. 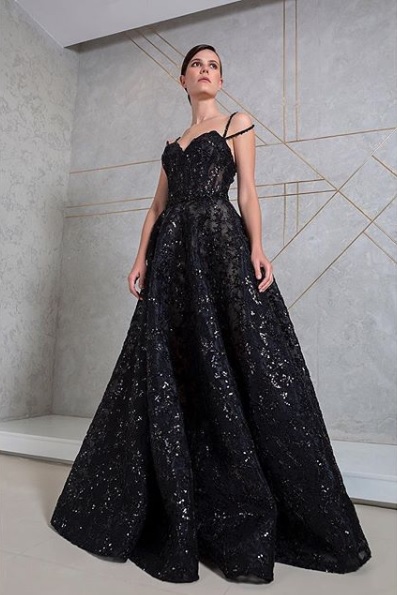 Her atelier is often buzzing with future clients flocking in and out while searching for a fashion fairy godmother who can materialise their childhood dreams into one unforgettable white dress. Her tendency to plant flowers amidst metres of tulle, and borrow stars from the farthest skies to decorate hemlines has made her a renowned name in a rapidly growing fashion scene.

The Lebanese designer, Iman Saab, has managed to carve her name on the local bridal walk of fame. Her designs have already been an evident part of many spectacular wedding parties around the country. Her voluminous silhouettes and dramatic designs have been the choice of brides who aim to celebrate with true extravagance.

In time for a new year with an eminent change, the designer decided to expand her horizon beyond bridal collections and move towards the bride’s entourage. Accordingly, Saab recently launched her very first ready to wear collection. Made with the same intricacy while aiming to weave pure beauty, the collection offers a wide variety of options for those who are closest to the bride.

Saab stated, “We wanted to keep all the customisation focus on bridal gowns for girls to have their dream wedding dresses,” further adding, “however, we could not deny the extremely high demand on customised evening gowns.”

As the founder and lead designer of an ambitious fashion house, she could not neglect the repetitive requests. Meanwhile, her knowledge of what goes into the customisation process from time and effort made her think of different approaches in order to meet the demand.

“The idea of starting a ready to wear line emerged from the need to offer evening gowns too,” Saab explained, “Usually the bride’s mother, sister, or friends want to have their dresses customised here as well.” Therefore, the designer took the bold step to create ready to wear dresses with the advantage of customisation as the brand only makes a very limited number from each design. 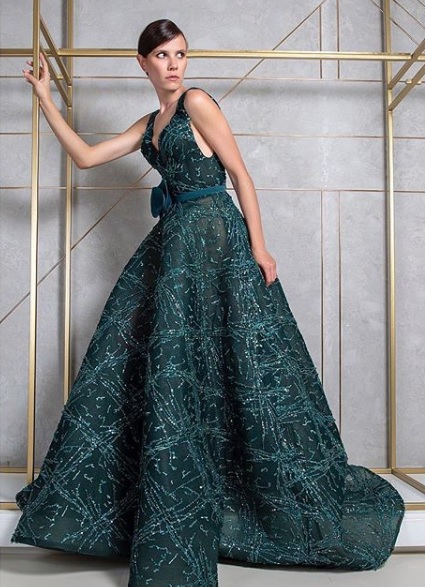 The debut collection maintained the designer’s favourite signature elements, making each design instantly identifiable. The dreamy collection showcases a rainbow of exquisite options which vary between monochromic minimalism to sweeping ball gowns. Nevertheless, they all share few design elements which Saab directly borrowed from her famed bridal gowns. From the floral belts to the unique selection of fabrics and the determination to keep it simply contemporary, the dresses aim to reach the excellence of haute couture.

According to the designer, this line also plans to target her acquaintances. Despite their different age groups, her clients are expected to be those who appreciate feminine silhouettes which can eloquently highlight their confidence and class.

The designer was inspired by nature and all of the secrets which scientists are still discovering after centuries of expedition and studies. Her fascination with the sky is apparent in the details invested in each and every gown. Her vision is translated in how the dresses represent celestial interpretations embellished with embroidered stars and planets.

The ready to wear pieces of art are available at the designer’s boutique in New Cairo, where she juggles production, appointments, and clients. Saab stated, “We also have a schedule for everything, we set due dates and timelines which we follow very strictly,” further adding, “For example, if we are set to test the quality of few new dresses this week as well as finish two bridal dresses, then we would have to do everything possible as a team in order to finalise those tasks before the workers leave on Thursday, which is the last day of the week at our atelier.” 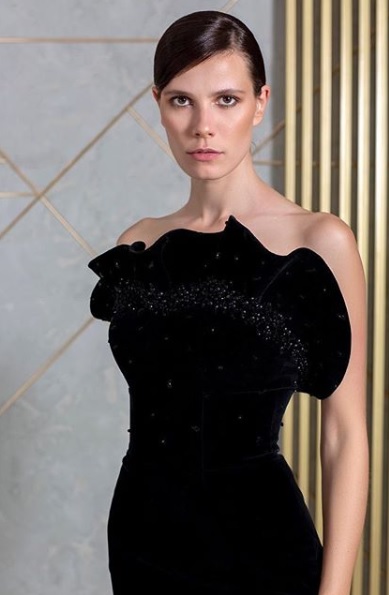 As one of the early designers who contributed to the local fashion industry, Saab has been at the focal point of all the recent developments which are taking place in the local scene. Accordingly, she believes that the industry still requires further development. “We certainly need specialised fashion schools in order to guide the new emerging talents,” said Saab.

On the other hand, the designer also admitted that finding the required materials and fabrics is still a challenge which she has to overcome when working on each new dress.

As for her upcoming plans, the designer aims to expand in new areas and establish more boutiques in new regions such as the currently booming Gulf region. Moreover, she is also looking forward to organising runway shows in order to showcase the full spectrum of her designs. Finally, she is determined to create an online website, which can give her customers the ability to directly order online.