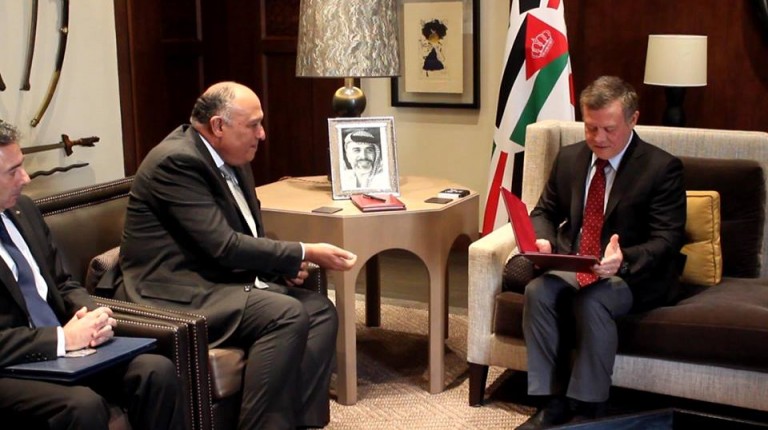 Egypt’s Minister of Foreign Affairs, Sameh Shoukry, met with King Abdullah II Bin Al-Hussein, the King of Jordan, on Wednesday during his visit to Amman in order to participate in a meeting of a number of his Arab counterparts.

According to a statement by the Egyptian Foreign Ministry’s spokesperson, Ahmed Hafez, the meeting between Shoukry and Bin Al-Hussein discussed the updates of several regional issues as well as issues of mutual concern, and highlighted the importance of boosting the coordination between Arab countries in order to face the current challenges in the Middle East.

The leaders also discussed the exerted efforts toward preserving the stability and security in the Arab region. Hafez added that the meeting also addressed the Palestinian issue and the efforts undertaken in order to reach a comprehensive and fair peace agreement with Israel based on the two-state solution.

Moreover, Shoukry and Bin Al-Hussein stressed the necessity of supporting the legitimate rights of Palestinians, as well as endorsing efforts in favour of establishing their independent state with East Jerusalem as its capital.

Shoukry is participating in a meeting which his counterparts from Jordan, Saudi Arabia, Kuwait, Bahrain, and the UAE. The meeting aims to exchange views on issues of shared interests and concerns.