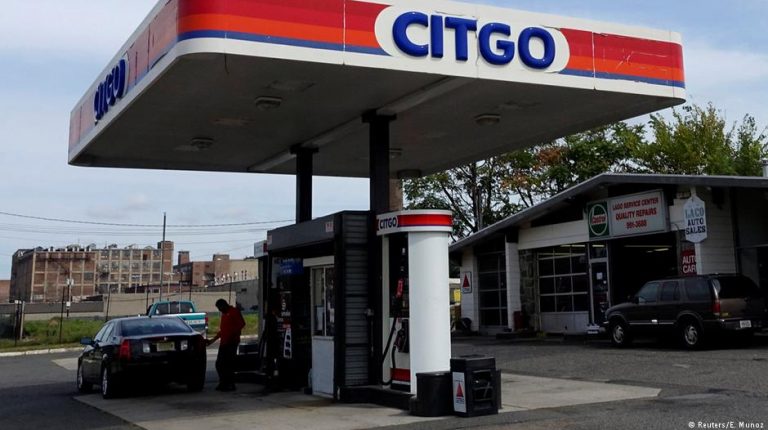 Venezuela’s socialist rulers have lived well off the nation’s oil industry for many years. But planned US sanctions could call time on Nicolas Maduro’s rule and stop the flow of foreign currency.For many years, the equation was very simple for the government in Caracas: crude oil from Venezuela was shipped to the US, the subsidiary of state-owned Venezuelan oil company PDVSA then refined it at its own facilities and sold it as gasoline via Citgo petrol stations, with the dollar proceeds going back to Caracas.

Even though the US and Venezuela have been at least rhetorically on the threshold of war since Hugo Chavez came to power in 1999, Citgo continued to do business and in Caracas the dollars poured in. Well over 90 percent of Venezuela's foreign exchange revenue comes from oil exports.

But Trump has other plans. All Venezuelan oil businesses in the US will be allowed to continue, but selective bank accounts of people connected with the socialist leadership will be blocked. In this way, Washington wants to help the self-proclaimed transitional president Juan Guaido.

For Venezuelan political scientist Ivo Hernandez, who conducts research at the University of Münster, the move is historical. "The US was the only regular foreign exchange source for Venezuela, so in the short to medium term, this is a heavy blow against Maduro," he told DW.

Maduro was visibly upset after the US sanctions decision. "They want to steal Citgo," he rumbled in a television address. Caracas pledged to fight the decision in the US courts.

As Günther Maihold of the German Science and Politics Foundation (SWP) told DW, all now depends on which alternative sources of revenue Venezuela can now draw on.

Citgo no longer the place to go

To understand the significance of Citgo for today's Venezuela, look no further than PDVSA, Venezuela's state-owned oil company, which operated autonomously for decades and was very profitable and also expanded abroad.

Chavez tried to use PDVSA revenues to finance his social programs. PDVSA had after all helped Chavez win power.

"PDVSA workers are for this revolution, and those who are not, should go elsewhere, go to Miami," Chavez said. In 2003 he declared and dismissed almost 18,000 PDVSA strikers as "enemies of the state."

Gradually, the socialists sold the international holdings of PDVSA. In 2010, shares in the Ruhr Öl company, a joint venture with BP, which had four refineries in Germany, went to the Russian oil behemoth Rosneft.

From the once 3.5 million barrels per day in 1998, Venezuela's production fell to just under 2 million barrels by 2017. Last year, due to the ongoing economic crisis, the country exported only 1.2 million barrels, the Organization of Petroleum Exporting Countries (OPEC) estimates.

Citgo claims to process 750,000 barrels per day at its refineries in the US. The rest of Venezuela's oil goes to Russia and China.

According to Hernandez, "there is probably no fresh money, but the supplies serve in return for loans."

According to reports, China alone could have spent between $50 billion (€44 billion) and $60 billion on loans repaid in oil. In the first 11 months of last year, according to Bloomberg, China imported 340,000 barrels of oil a day.

But even at Citgo, from a once proud network of about 14,000 gas stations only about 5,000 are left, and of the original eight refineries three remain.

The Maduro regime suffers from chronic financial difficulties and Venezuela has deposited 49.9 percent of Citgo as collateral with the Russian Rosneft Group. Overall, Russia is said to have already given $17 billion to Venezuela.

That's why Russia is behind Venezuela and has criticized US sanctions. It will protect its interests "within the international legal framework," the Kremlin said recently.

Maihold sees legal problems in the US action. "You cannot just ignore ownership — that would contradict a principle of the world economy and the US economy."

John Bolton, Trump's national security adviser, now wants to directly freeze $7 billion worth of assets. If the US actually does that, Venezuela could stop supplying Citgo with crude oil. But even in the short to medium term, no new sources of revenue can be tapped, says Hernandez.

How quickly the Venezuelan government can open up new foreign exchange sources depends on whether its allies abroad remain loyal to Maduro. The financial markets are skeptical and believe that Maduro will not last much longer.

According to the Financial Times, the prices of Venezuelan government bonds and PDVSA securities rose significantly. Investors are already speculating on a change of power.