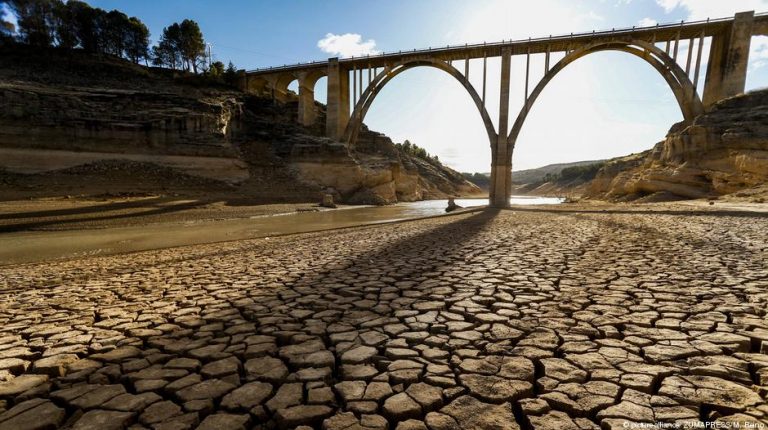 The death of a Spanish toddler who fell into an illegal borehole has put the country’s water crisis on the spot. It’s estimated there are over one million illegal wells in Spain.Rescue teams dug for two weeks in the Andalusian countryside to try to save a boy who fell down one of Spain's many illegal wells. The 2-year-old Julen Rosello was found dead in an open borehole in the town of Totalan, near Malaga.

Based on surveys of known illegal wells, researchers have estimated there are over one million of these unauthorized wells dotting the country. They are known locally as pozos luneros or "moonshine wells" because they are often dug by the light of the moon when authorities are not watching.

Spain is drying out

Illegal wells are not a new phenomenon. Farmers have been using them for decades to irrigate their crops, as water gets harder to come by.

Along with the rest of Europe, Spain experienced a heat wave in the summer of 2018. Rain was already scarce in the region even before last year. Between 2016 and 2017, rainfall was down 12 percent. In 2017, a quarter of the nation's districts were considered to be in an "emergency situation" due to a lack of water.

Underground reservoirs have also seen record lows. In the spring of 2017, water reservoirs sunk to their lowest levels in decades, holding just 43 percent of their capacity. Usually they are at 60 percent during this time of year.

The problem is not likely to improve any time soon.

Not only does drought threaten Spain's water supply, it also leads to a decrease in hydropower production. With less hydropower being produced by Spain's rivers, the country is forced to rely more heavily on coal and natural gas. This emits more CO2, thus further contributing to climate change, which intensifies drought conditions.

A Greenpeace report projected that 75 percent of the country is susceptible to desertification. Scientists warn that all of southern Spain could become a desert by the end of this century.

Countries in southern Europe provide produce to the rest of Europe. Tomatoes, lettuce, peaches, pears, and one-third of the continent's strawberries are grown in southern Spain. Rice, a water-intensive crop, is also grown along the Guadalquivir delta in the region.

Around the time that groundwater began to be regulated in Spain in the mid to late 1980s, Spanish strawberry production and rice farming were picking up. As these crops needed more water, farmers started digging both authorized wells — but used more than their allowed quota — as well as building completely unregistered, illegal wells.

When water regulations changed in 1985, requiring landowners to register their wells, many with existing wells simply did not bother to do so, explains Nuria Hernandez-Mora, a water policy researcher and member of La Fundacion Nueva Cultura del Agua (the New Water Culture Foundation).

Unsustainable water use in southern Spain even led some UK grocery stores and international food companies to put pressure on the local government and strawberry growers in the area to change their irrigation habits.

Illegal water use has not entirely escaped punishment though. In the last two years, local authorities in Andalusia have opened 943 cases for groundwater diversion, half of which were in Huelva, the strawberry capital of Spain. The government are able to fine perpetrators up to €1 million ($1.15 million).

"The problem of wells and illegal water catchments should be the subject of coordination between administrations, along with collaboration and good citizenship," Alfonso Rodriguez Gomez de Celis, a delegate of the Spanish Government in Andalusia, told DW in writing.

Such a call for collaboration and cooperation is not just government rhetoric. There has been public pushback in the country when local governments tried to crack down on those siphoning water illegally.

Last September, an environmental agent for the local water management authority Confederacion Hidrografica del Guadalquivir was patrolling for illegal wells in Huelva when residents harassed him to the point that he locked himself in his car and called the police.

Hernandez-Mora identified agribusiness as the main culprit for illegal water extraction and said they have been "used to doing what they want for a really, really long time."

Stealing water from a national park

Huelva also lies directly next to Donana National Park. Just last week, the European Commission referred Spain to the Court of Justice of the EU for its failure to protect groundwater resources in the Donana Wetlands, part of the national park and a UNESCO World Heritage site. The commission blamed water diversions on agriculture and tourism.

"The Commission is now concerned that the condition of the wetlands is likely to deteriorate further, as Spain is falling short of its obligations," an EU Commission spokesperson told DW. "The measures in place to ensure the sustainable management of water resources and the conservation of the Donana habitats are insufficient and poorly implemented."

The park, known for its wetlands and the wildlife that inhabits them, has seen a sharp decrease in its natural water supply.

The World Wildlife Fund has been raising the alarm about unsustainable water practices in the area for years. In 2016, they pointed to an estimated 1,000 illegal wells in the surrounding area, sucking water resources away from the national park.

"The future of Donana is uncertain if the authorities do not urgently take action," Rafael Seiz Puyuelo, a technical expert for WWF Spain's freshwater program, told DW. "This means that they must reduce the abstraction from the aquifer, they have to limit the expansion of intensive agriculture around it, and they have to take actions to ensure that the needs of water and space of these wetlands are met."

Addressing Spain's water crisis and the problem of illegal wells is not easy, but there are potential solutions. Desalinization could be one option. Choosing more efficient crops and adopting more sustainable watering practices is another. The EU has also made funding available under their Rural Development Program for farmers in affected areas like Andalusia.

Hernandez-Mora explains that at the national level, the government needs to foster more cooperation between the river basin authorities monitoring wells, and those making rules for water use and agricultural policy.

At the European level, she also sees a need for better synchronization between agriculture and water policy. She gives the example of not providing subsidies to farmers who are found to have illegal wells.

The European Commission's recent court case suggests that enforcement is the main issue.

"At the end, really what you need is the political will to actually enforce legislation," said Hernandez-Mora. "The collapse is around the corner."