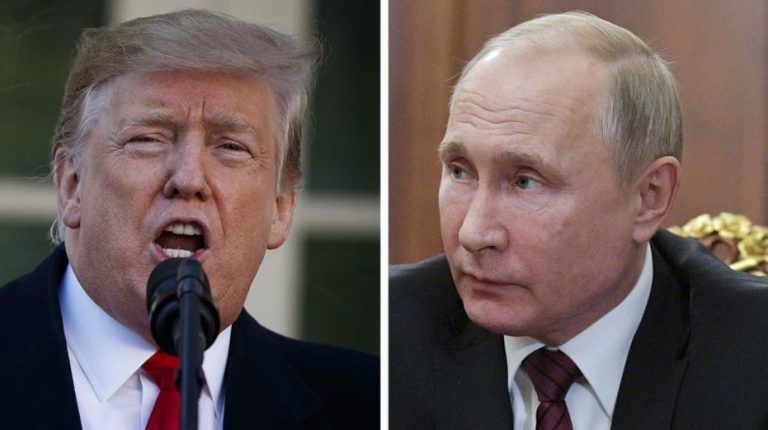 The United States is suspending the intermediate-range nuclear (INF) force treaty, Sectary of State Mark Pompeo announced on Friday, amid Russia’s violations and noncompliance with the cold war nuclear arm treaty, “countries must be held accountable when they break the rules” Pompeo said.

Russian President Vladimir Putin announced on Saturday that Russia has suspended its obligations under the INF treaty in response to the US announcement, “we will come for a tit-for-tat response” Putin said during the meeting, “our American partners have announced the suspension of their participation in the treaty, so we will suspend as well.”

“For years Russia has violated the terms of the INF treaty without remorse” Pompeo said, mentioning that they are giving Russia 180 days to destroy their nuclear missiles and launchers otherwise US President Donald Trump will confirm the withdrawal from the INF treaty.

The US accuses Russia for violating the INF treaty since 2014, additionally Trump has been warning for months that they are ready to withdraw from the treaty, however, “Russia continues to deny that their missile system is noncompliant with and violates the treaty” Pompeo Said.

“The United States has fully adhered to the INF treaty for more than 30 years, but we will not remain constrained by its terms while Russia misrepresents its actions,” Trump said in a statement on Friday. “We cannot be the only country in the world unilaterally bound by this treaty, or any other.”

Putin ordered the Minister of Foreign Affairs Sergey Lavrov, not to begin any new INF talks with the US, saying Moscow will wait to see if Washington responds to any of Russia’s earlier proposals on saving the agreement.

Putin added that the defence ministry will begin developing new nuclear-capable missiles including supersonic ones.

The Russian government counter-accused the Trump administration of looking for any excuse to end the cold war-era agreement. Dmitri S Peskov, Putin’s spokesperson, said the US failed to negotiate in good faith.

“On the whole, the reluctance of the Americans to listen to reason and to hold any kind of substantive talks with us shows that Washington decided to crush the treaty a long time ago,” Peskov told reporters.

The INF treaty is an arms control agreement between US and the Soviet Union-Russia Federation now- which is effective since 1 June 1988, however it is a bilateral treaty; it significantly affects European security.

All land-based ballistic and cruise missiles were eliminated by the treaty, as well as their launchers with ranges of 310-620 miles, which makes them a threat to European security.

Both parties accused each other since 2008 for violating the INF treaty. Due to Russia’s non-compliance, in October 2018 Trump signalled for withdrawing the US from the treaty, and in November 2018 Putin announced that the Kremlin was prepared to reach a solution regarding the INF but if the US withdrew they would retaliate.

Kate Connolly: How Brexit turned her world upside down