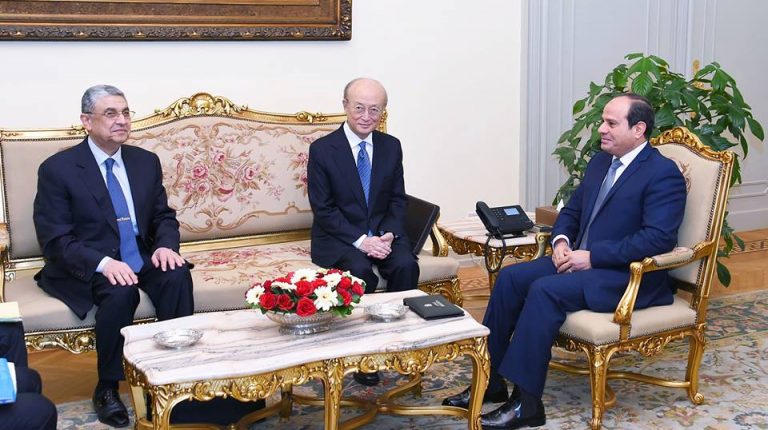 President Abdel Fattah Al-Sisi affirmed Egypt’s keenness to implement the highest international standards in the area of ​​nuclear safety and security in the Dabaa nuclear power plant, during his meeting with the Director General of the International Atomic Energy Agency (IAEA) Yukiya Amano, on Sunday.

Al-Sisi said that Egypt aims to benefit from the peaceful uses of atomic energy to serve its development objectives, stressing Egypt’s ambitions to strengthen the established cooperative relations with the IAEA.

Furthermore, Al-Sisi said Egypt aspires to cooperate fully with the IAEA to benefit from its expertise in training and qualifying cadres, support the operation and maintenance of the nuclear plant.

Amano praised the Egyptian role in the field of nuclear non-proliferation and the peaceful uses of atomic energy, as well as in the decision-making process of the agency as one of its founding member countries.

He also showcased the latest developments in the agency’s efforts to support the Egyptian technical capabilities in the nuclear fields, especially in view of the Egyptian ambition in the field of peaceful uses of atomic energy.

The Egyptian president expressed Egypt’s hope that the IAEA would exert more effort to support declaring the Middle East a region free from weapons of mass destruction, including nuclear, chemical, and biological weapons.