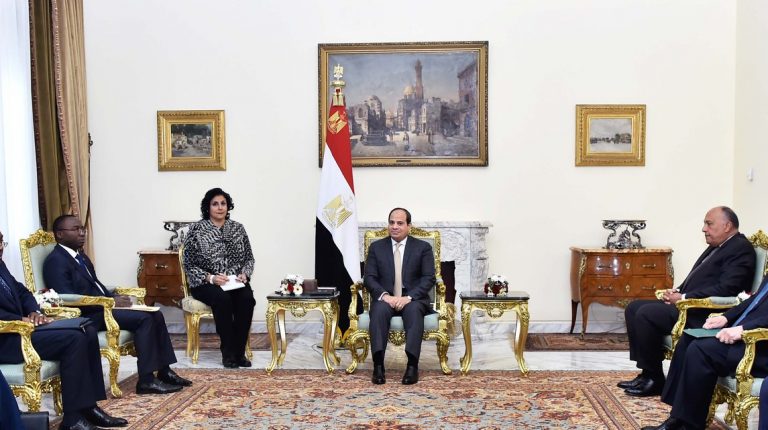 President Abdel Fattah Al-Sisi met on Saturday with a high-level political delegation from the Democratic Republic of the Congo (DRC), represented by both President Félix Tshisekedi, and former President Joseph Kabila.

During the meeting, Al-Sisi said that Egypt values the outstanding cooperation with the DRC in the different fields. He also confirmed Egypt’s determination on continuing to use its capabilities in order to support the DRC in the areas of the developmental and technical aspects, as well as promoting the political relations between the two countries, according to a statement from the presidency’s spokesperson, Bassam Rady.

He congratulated the people of the DRC for the successful presidential, parliamentary, and the local elections which were held in the country in December 2018, by relying on its own efforts and the peaceful transition of power to President Tshisekedi.

Rady stated that Al-Sisi lauded former President Kabila’s wisdom and vision in running the elections, despite the challenges which he faced. Al-Sisi also confirmed the importance of supporting the results of the elections in order to protect the stability, security, and peace in the DRC.

Moreover, members of the high-level delegation expressed their appreciation for the close ties with Egypt and its stands in support of the DRC in the various regional and international forums, in addition to Egypt’s sincere and supportive role to preserve peace and stability in the DRC. They also reviewed the political developments following the success of the elections.

Al-Sisi confirmed that Egypt will remain a supportive ally of the DRC, and will continue to assist its people, during Egypt’s chairpersonship of the African Union (AU), at the political and developmental levels, as well as within the ongoing bilateral cooperation in order to preserve their unity and territorial integrity.

On a different matter, Al-Sisi met with Prime Minister Mostafa Madbouly, a number of ministers, the General Intelligence Directorate’s representatives, as well as with the assistant to the minister of foreign affairs for African organisations and communities. They discussed the preparations for Egypt’s upcoming presidency of the AU, which will start on 10 February 2019, and went over the country’s endeavours in this regard.

Furthermore, the president stressed the importance of expanding the cooperation with African countries, extending the cultural bridges with their people, enhancing Egypt’s soft power in Africa, in addition to effectively engaging in drafting and developing the principles as well as the mechanisms of the joint African action, in order to reach mutual benefits on key issues pertinent to development and maintaining the peace and security in the continent.

The meeting also reviewed Egypt’s priorities during its chairpersonship of the AU, which stem from the current agenda. Additionally, they discussed the most important working group mechanisms and initiatives which were agreed upon within the framework of the AU, particularly ‘Agenda 2063’. They also went over the various initiatives for economic and regional integration, as well as the improvement of the intra-African trade mechanisms in order to prevent and settle African disputes, in addition to the institutional reform of the AU.

The leaders also stressed Egypt’s readiness to use its capabilities and expertise in order to promote the joint African action, and its enthusiasm to realise tangible results by serving the actual needs of the African countries and peoples, especially through agreeing on the main challenges to peace and security, including combating terrorism, in addition to leading sustainable development efforts in Africa, and transferring the Egyptian technical experience through training and grants to the African people.