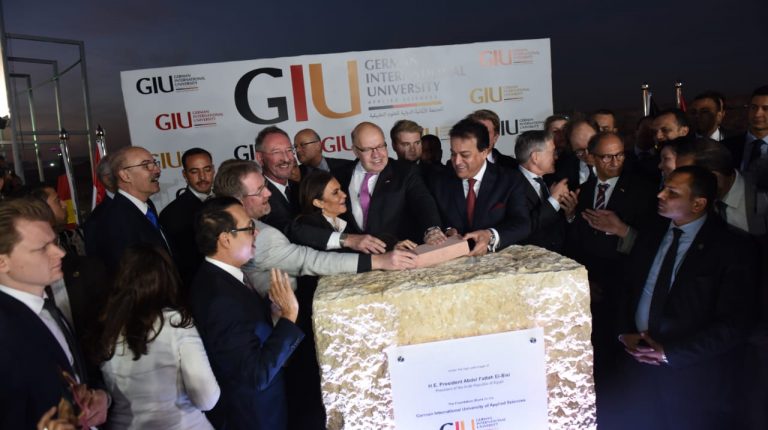 Egypt’s Minister of Investment and International Cooperation, Sahar Nasr, along with the Minister of Higher Education and Scientific Research, Khaled Abdel Ghaffar, and the German Federal Minister for Economic Affairs and Energy, Peter Altmaier, laid on Sunday the cornerstone for the German International University (GIU) at the New Administrative Capital (NAC).

During his two-day visit to Egypt, Altmaier, accompanied by Nasr, conducted a field visit to the NAC

The German minister affirmed his country’s keenness on expanding German investments in the Egyptian market in line with the recent regulation issued by the Egyptian government.

Total German investments in Egypt are estimated at $7.1bn in 1,215 firms working in various sectors, including petroleum, chemicals, automotive, and others, said Altmaier, affirming that the NAC provides a good opportunity for boosting bilateral ties.

Moreover, Altmaier and the Egyptian Minister of Trade and Industry, Amr Nassar, inaugurated the fifth session of the joint economic committee on Monday.

The German embassy in Cairo said last Thursday that the visit aims to tackle the progress of Egypt’s economic reform programme, as well as the economic relations between the two countries.

For her part, Nasr affirmed that Egypt currently has 1,000 investment opportunities, of which 25 are in the NAC.

The ambassador added that Egypt has taken fundamental and bold reform decisions, and now faces the challenge of continuing major structural reforms to achieve sustainable development.

In 2018, Germany was Egypt’s biggest European trading partner, with a total trade volume of about $6bn.