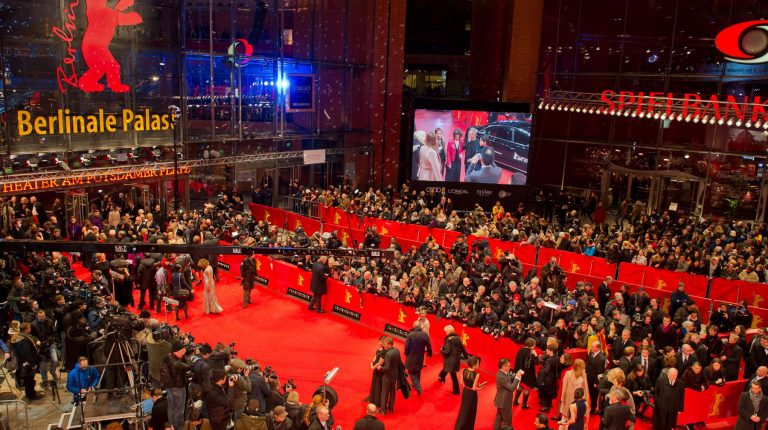 Seventeen films are competing for the awards in this year’s competition, and the winners will be announced at the Berlinale Palast on February 16.

Juliette Binoche has captivated audiences and critics alike in over 70 films, and has garnered numerous awards and nominations, including honours at the festivals in Berlin, Venice, and Cannes. She was discovered as an upcoming talent in Jean-Luc Godard’s Je vous salue, Marie (Hail Mary, 1984) before playing her first leading role in André Téchiné’s Rendez-vous (1985). Her international breakthrough was in Philip Kaufman’s The Unbearable Lightness of Being (1988), the film adaptation of the eponymous novel. Since then she has worked internationally, both in the US and in European productions. Her collaboration with Leos Carax, Les amants du Pont-Neuf (The Lovers on the Bridge, 1991), screened in the forum at the 1992 Berlinale. Juliette Binoche received the Coppa Volpi in Venice in 1993 for her role in Trois Couleurs: Bleu (Three Colours: Blue) by Krzysztof Kieślowski, as well as a César award in 1994. That same year, she was awarded the Berlinale Camera. In 1997, she won a Berlinale Silver Bear, a BAFTA and an Academy Award for her role in The English Patient (1996, dir: Anthony Minghella). In Lasse Hallström’s romantic melodrama Chocolat (2000), she played the lead alongside Johnny Depp. In 2010, she was awarded the prize for Best Actress at the Cannes Film Festival for her leading role in Abbas Kiarostamis’ Copie conforme (Certified Copy, 2010). Juliette Binoche appeared in the Berlinale opening film of 2015, Nadie quiere la noche (Endless Night) by Isabel Coixet. Her latest films are High Life (2018) by Claire Denis and Doubles vies (Non-Fiction, 2018) by Olivier Assayas.

Justin Chang has been a film critic for the Los Angeles Times since 2016 and also reviews movies for the US public radio programmes ‘Fresh Air’ and ‘FilmWeek.’ He was previously chief film critic at the international trade magazine Variety. Chang is the author of ‘FilmCraft: Editing’, a 2011 book of interviews with 17 of the world’s top film editors. He was recently named film critic of the year at the Los Angeles Press Club’s National Arts and Entertainment Journalism Awards, and in 2014 he received the inaugural Roger Ebert Award from the African-American Film Critics Association. Chang, who holds a degree in journalism from the University of Southern California, is chair of the National Society of Film Critics and secretary of the Los Angeles Film Critics Association. He has served on numerous juries at film festivals including Busan, SXSW, San Francisco, and Jerusalem. After studying acting at Berlin’s Ernst Busch University of Performing Arts, Sandra Hüller first took to the stage in Jena, Leipzig, and Basel. Her breakthrough on the big screen came with Hans-Christian Schmid’s film Requiem in 2006. For this performance she not only won the Berlinale’s Silver Bear for Best Actress, but also German and Bavarian Film Awards. Alongside her often-prizewinning theatre work, she has starred in many films, including Maria Speth’s Madonnen (2007), Nanouk Leopold’s Brownian Movement (Berlinale Forum 2011), the internationally acclaimed Über uns das All (Berlinale Panorama 2011), Finsterworld (2013, dir: Frauke Finsterwalder), and Jessica Hausner’s Amour Fou (2014). For Maren Ade’s film Toni Erdmann — thunderously received in 2016 at its world premiere in the competition at Cannes — Sandra Hüller won European, German, and Bavarian Film Awards. In 2018, with Thomas Stuber’s In den Gängen (In the Aisles), she again participated in the Berlinale Competition and garnered another nomination for a German Film Award.

Chilean director Sebastián Lelio first attracted critical acclaim with his feature film debut, La Sagrada Familia (The Sacred Family), at the San Sebastián Film Festival in 2005. His two subsequent films Navidad (Christmas, 2009) and El Año del Tigre (The Year of the Tiger, 2011) confirmed his talent. He celebrated his international breakthrough with Gloria, which ran in the Berlinale Competition in 2013 and, among other awards, won a Silver Bear for lead actress Paulina García. In 2017 Sebastián Lelio presented Una mujer fantástica (A Fantastic Woman) in the Berlinale Competition and took home the Silver Bear for Best Screenplay as well as the Teddy Award. The film went on to win a Goya, an Independent Spirit Award, and — as the first Chilean film ever — the Oscar for Best Foreign Language Film. In 2017, with Disobedience, starring Rachel Weisz and Rachel McAdams, Lelio also made his English-language debut; it earned him five nominations at the British Independent Film Awards. In 2018, he recreated his hit film Gloria in the US. Titled Gloria Bell, it stars Julianne Moore and John Turturro.

Rajendra Roy has been the Chief Curator of Film at the Museum of Modern Art in New York since 2007. In this capacity he manages a collection of over 30,000 works and has helped create exhibitions on Pedro Almodóvar, Wim Wenders, Tim Burton, and Mike Nichols, among others. He co-authored the book The Berlin School: Films from the Berliner Schule (2013). He is co-chair of the selection committee for New Directors/New Films, presented with the Film Society of Lincoln Centre. Previously, he was director of programming and artistic director for the Hamptons International Film Festival, as well as the only American member of the selection committee for the Berlinale Competition section from 2004 – 2008. Rajendra Roy studied political science and French literature at the University of California in San Diego and has been a member of numerous juries, including at Sundance, SXSW, the Academy of Motion Picture Arts and Sciences, and the Independent Spirit Awards.

After training at the Bristol Old Vic Theatre School, Styler became a leading actress with the Royal Shakespeare Company, as well as her many television and film roles. In 1990 she became a producer, and her documentary Moving the Mountain won the prize of the Ecumenical Jury at the 1995 Berlinale. Styler has produced many award-winning films, among them Guy Ritchie’s Lock, Stock and Two Smoking Barrels (1998), Dito Montiel’s Sundance hit, A Guide to Recognising Your Saints (2006); Duncan Jones’ Moon (2009); and Richard Glatzer’s and Wash Westmoreland’s Oscar-winning Still Alice (2014). Her directorial feature debut in 2017, Freak Show, celebrated its world premiere in the Berlinale’s Generation 14 plus section. This year, two of her production company Maven Pictures’ films will screen in Berlin: Guy Nattiv’s Skin in the Panorama section; and Andrew Ahn’s Driveways in Generation Kplus. Styler – a UNICEF UK ambassador and co-founder of the Rainforest Fund – also continues her acting career both on stage and on screen, most recently co-starring in Cary Fukunaga’s 2018 Netflix series Maniac.