Long after their deaths, pharaohs still fascinate the world with their treasures and legacy. Minister of Antiquities Khaled Anany announced on Saturday the discovery of a number of burial chambers at Tuna el Gebel’s archaeological site in Minya governorate. 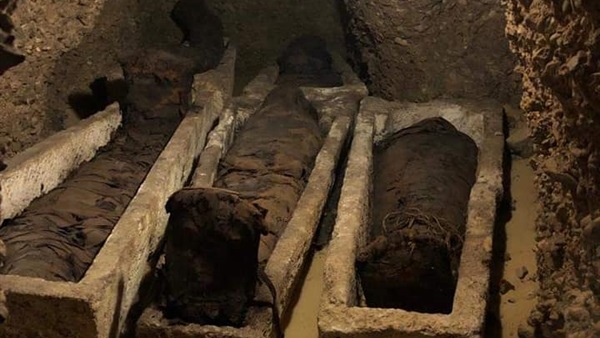 In a press conference held at the site, Anany stated that 40 mummies were unearthed inside the cemeteries, of which 10 belong to children, while the remaining 30 belong to both men and women.

The discovery was announced with the attendance of Minister of Tourism, Rania Al-Mashat and 11 ambassadors who witnessed the unearthing of the major find. The cemeteries were detected by an Egyptian mission from the ministry of antiquities, in cooperation with Research Centre for Archaeological Studies at Minya University.

Anany stated in the press conference that the cemeteries include five wells, three of them used for burial. He explained that the cemeteries belong to upper middle class ancient Egyptians, and people from different ages were buried inside the three burial rooms.

The mummies were found well-preserved and covered with layers of cardboard, beside a number of crockery. The cemeteries date back to Ptolemaic-era.

Secretary-General of the Supreme Council of Antiquities, Mostafa Waziri, stated that burial methods varied at the two cemeteries. He explained that some of the mummies found inside tombs made of brick, while others were buried inside wooden ones, and the remains were discovered laid on the ground of the burial wells.

Anany further added that for three years in a row, the Tuna Gebel archaeological site has been surprising the world with three astonishing discoveries.

The finding was revealed in the mission’s second excavation season that started at the end of November last year. The archaeological site, Tuna El-Gebel, was previously the necropolis of Egypt’s 15th nome during the late new kingdom and the beginning of the new intermediate period.

Two years ago, the archaeological site surprised the world with an uncovered cemetery that dates back to the late period, containing 17 non-royal mummies buried inside, which was the beginning of the digging process to find the rest of the cemetery, according to the Anany at the time. At their excavation process, the team also found a number of Roman funerary houses carved in clay, in which they also found a collection of different coins, lamps, and other domestic unearthed collections.

Anany said at the 2017 discovery that the ministry believes that this archaeological site still has a lot of unrevealed secrets and crypts that we aim to discover.

For her side, Al-Mashat said that the discovery put Minya on the list of touristic places which will be focused on by the ministry of tourism to promote uncommon archaeological places. She also added that such a discovery will increase people’s passion towards the opening of the Grand Egyptian Museum.

According to state-run media outlet, Al-Ahram Online, Fathi Awad, director of Tuna El-Gebel, said that “the archaeological site has several tombs, among them the tomb of Petosiris, the Isadora tomb, a sacred animal ceremony, a Roman cemetery, and two frontier reliefs of king Akhenaten.”