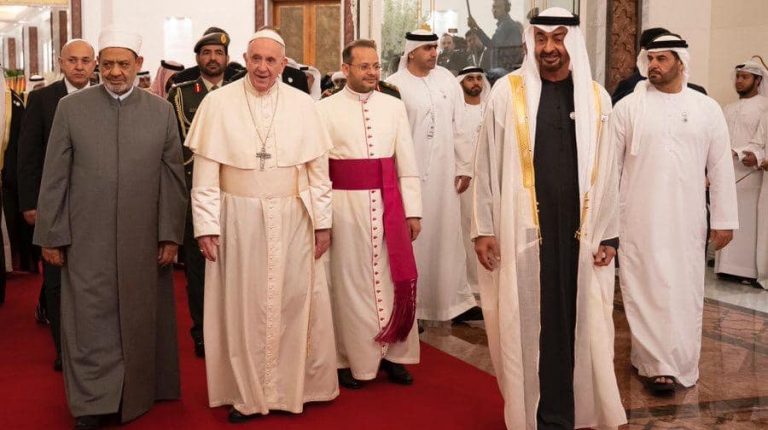 The Grand Imam of Al-Azhar, Ahmed Al-Tayeb, met on Monday with several religious leaders and intellectuals who are participating in the Global Conference of Human Fraternity which is being held in Abu Dhabi, the UAE.

On Sunday, Al-Tayeb met with Pope Francis, head of the Catholic Church, after his arrival to Abu Dhabi. The two highest religious leaders are set to have another meeting.

Al-Tayeb said that the conference aims to stress the humanistic core of religions and their values and principals which opens the gates of peace and coexistence between all people.

He emphasised the pivotal role of religious leaders to build bridges for cooperation and dialogue for their followers, and countering extremist ideas.

Participants of the conference expressed appreciation for the historic visit of the Grand Imam and Pope Francis to the UAE.

Al-Tayeb and Francis arrived in Abu Dhabi on Sunday, and were received by Abu Dhabi Crown Prince Mohammed bin Zayed.

The Global Conference of Human Fraternity which is being held in Abu Dhabi, the UAE from 3 to 5 February. Over 700 intellectuals, political and religious leaders are participating in the conference. It is also the first visit of Pope Francis to the Arab Peninsula.