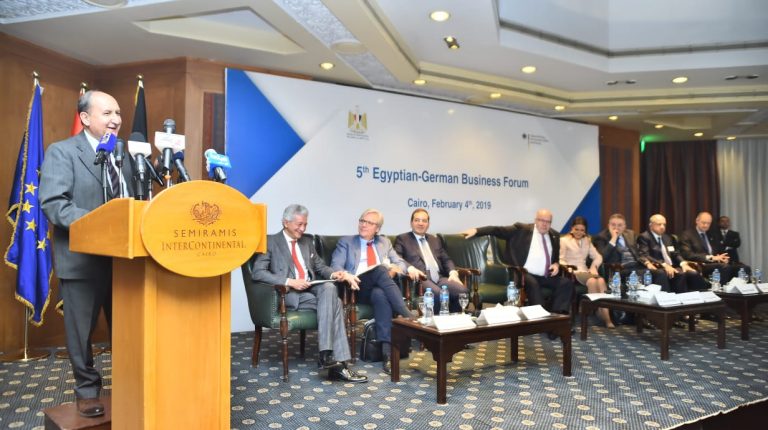 German Vice-Chancellor, Federal Minister of Economic Affairs and Energy, Peter Altmair, expressed his country’s interest in promoting economic relations with Egypt as it one of the main partners of Germany in the Middle East region and in Africa.

He pointed out that the German delegation’s visit to Egypt proves the interest of German companies to invest in Egyptian market and promote investment and economic partnership.

During 5th Egyptian -German Committee and Economic Forum held in Cairo on Monday by German-Arab Chamber of Industry and Commerce-AHK, Altmair pointed out that he is confident in the efforts of the Egyptian government to remove constraints and challenges facing German companies operating in Egypt, and to improve the investment climate in order to attract German firms interested in the Egyptian market to pump investments into new projects, in cooperation with the Egyptian private sector. In this regard, he also praised the successful economic reform programme, recently adopted by Egypt, which contributed toward achieving higher growth rates.

Furthermore, Altmair noted that there are significant opportunities for cooperation between the two countries, particularly in the areas of education and high-technology projects small-size and medium-sized enterprises, energy and construction.

Meanwhile, the CEO of the Association of German Chambers of Commerce and Industry, Martin Wansleben, said, ” We are interested in doing business in Egypt, and we are working hard to convince German companies to invest in Egypt.”

Wansleben added that Germany is trying to enforce educational activities in Egypt, noting “We should make and attractive project and activities package to invest in the educational sector in Egypt.”

Egypt is a wonderful market with a rich culture and tradition, and it is a hub for the African continent’s countries, according to Wansleben.

For his part, MP and Chairperson of the Federation of Egyptian Industries, Mohamed Zaki El Sewedy, said that Egypt has done a lot through developing legislations to motivate investors and promote a positive investment climate to attract foreign direct investment to Egypt.

El Sewedy noted that for boosting the economy Egypt has achieved great efforts in human development, training and upgrading Egyptian youth and employees. Additionally, the Egyptian government cooperates with any system which aims to upgrade and raise the skills of youth and workers.

Chairperson of North Africa Middle East Initiative of German Business, Roland Busch, said that Egypt is forecasted in 2030 to be one of the top 20 largest economies. Busch noted that Siemens ois ne of the most successful projects in Egypt, and the company has a record in the implementation of energy projects in Egypt especially in the field of electricity production, indicating that the company provides advanced training programmes for Egyptian engineers with the latest technologies in the world.

He added that the company also operates in the Egyptian market in the areas of education, health, training and career development.

The President of the Federation of the Egyptian Chambers of Commerce, the Union of African Chambers and the Union of Mediterranean Chambers, Ahmed El Wakeel, said that Egypt is back since it the land of opportunities, explaining the agreement of Egyptians on the constitutional amendment will give a space for the business community to become a prosperous economy.

Furthermore, he noted that the flotation of the Egyptian pound exchange rate turned the Egyptian market into a free and more competitive market.

El Wakeel pointed out that Egypt has joined many international agreements that made the state the gateway to so many countries and economic blocs.

Germany bans landing of Iranian airline on its territory