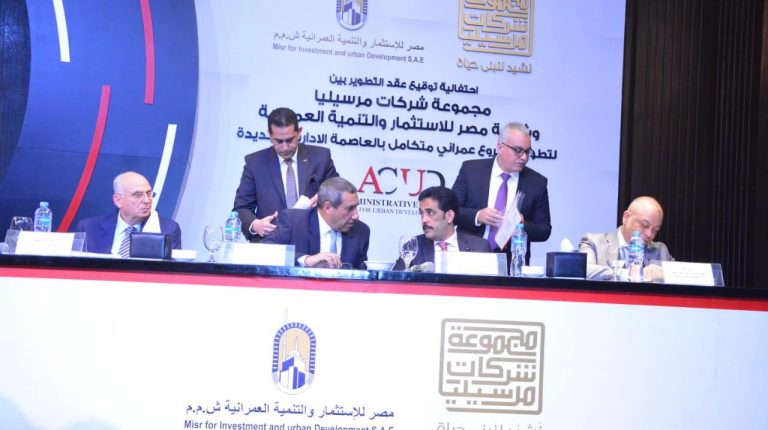 Marseilia Group has signed a contract to develop an integrated urban development project in the New Administrative Capital (NAC), in cooperation with Misr for Investment and Urban Development Company, with total revenues of EGP 5bn.

Sherif Heliw chairperson of Marseilia Group said that project’s official launch is planned in March, which is located on an area of 42 acres overlooking the embassies district, the Green River, and the Al Masa New Capital Hotel.

Heliw added that the project comprises of 1,750 units with sizes ranging from 90 sqm to 250 sqm, with integrated services.

During the press conference held on Thursday, Heliw explained that the land is owned by Misr for Investment and Development, and Marseilia will develop the project.

He elaborated that the project is being developed over three years on a 20% built-up area and the rest of the project size will be allocated for green areas and landscaping.

It is planned to export about 50% of the project abroad thanks to the Marseilia’s agents in Gulf area since 2001.

For his part, Ragai Ismail Moselhy, chairperson of Misr for Investment and Urban Development, said that signing the development contract with Marseilia Group represents a breakthrough in the real estate investment world due to the expertise and capabilities of both sides.

Moselhy added that the project significantly contributes to the provision of over 15,000 direct and indirect jobs throughout the project construction.

“Misr for Investment company was one of the first companies that sought to sign contracts for the purchase of the project land in 2017, after the site was chosen very carefully, due to believing in the importance of the NAC in the development of Egypt’s civilised destination,” Moselhy noted. “The board of directors has presented a competition among the largest consulting firms to choose the best design and supervise the implementation of the project to create an integrated residential compound in the Administrative Capital. The company received 13 offers of different designs.”

He revealed that the company has obtained the ministerial approval on the project construction No 1003 dated 11 June 2018.