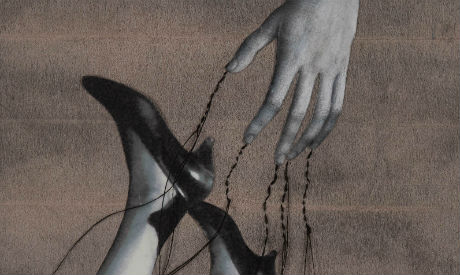 When eyes are directed toward it, and with great anticipation regarding what it will turn out to be like, most expect it to be largest cultural centre in Cairo to open its doors on Wednesday with two mega exhibitions.

The cultural hub will welcome people with When Dreams Call for Silence, an exhibition for artist Huda Lutfi. For the first time in 20 years, the AUC will feature the work of Lutfi as an artist rather than an art professor who has been teaching at the university for nearly 25 years.

The TCC’s opening comes as a part of the AUC’s centennial celebration.

Lufi is a cultural, feminist historian by professional training. She began her artistic career when she was a professor at the AUC. Her art has been widely exhibited in venues all over the world, including galleries in the UAE, the US, Austria, Singapore, and Germany among others.

Under the name of Bent El-Nil (The Daughter of the Nile), Sherine Guiruis takes part in the second exhibition. In her the first exhibitions in Egypt, Guirguis’ paintings feature Egyptian feminist, poet, and editor Doria Shafik, who was one of the main pillars of the women’s liberation movement in Egypt. Shafik is one of the women who fought to grant Egyptian females the right to vote in the Egyptian constitution.

Guirguis is an associate professor of the Practice of Fine Art and Vice Dean of the faculty at the University of Southern California. Her art has also been displayed internationally in Dubai, Sharjah, and Venice, Italy.

The exhibitions are curated by Shiva Balaghi, the senior advisor to the President and Provost of the AUC for the Arts and Cultural Programmes.

According to a press release published by the AUC, Balaghi is a cultural historian, focusing on the visual arts of the Middle East. For nearly two decades, she taught history and art history at New York University and Brown University, becoming one of the first professors to introduce contemporary Middle Eastern art into American university curriculums.

The TCC was pronounced established, at the AUC Tahrir Campus, last September.

Sawiris previously told Daily News Egypt that he funded the cultural centre. aiming for it to become a platform for young talents to showcase all their hidden work which is seeking to find a forum through which it can be introduced to the world. The TCC is to witness all sorts of independent art varying from music, sculpture, painting, theatre plays, to cinema.

He added that the TCC is planned to be totally different from the existing cultural centres in the city. Despite funding it, the centre will be fully owned, operated, and programmed by the AUC.

At signing the agreement event, Sawiris stated that launching the TCC is a way of retrieving Egypt’s currently lost art legacy and giving a chance to millions of young talents to introduce to the world their creativity.

“I believe in the power of arts and culture in transforming communities and creating a long-lasting positive impact on youth and children, and I believe that we are in utmost need for this positive impact in today’s Egypt,” Sawiris said.