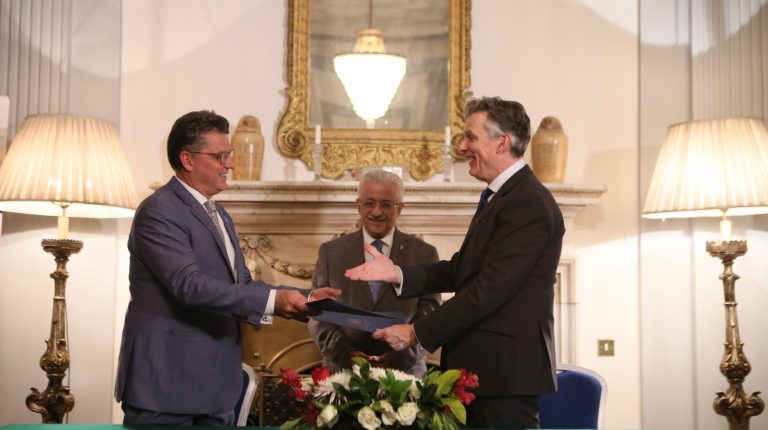 With the aim of improving the educational system and providing the less fortunate children in the remote regions with a chance to receive better education, the UK Foreign Commonwealth Office (FCO) has allocated a total of EGP 276m to the Integrated Education Services for Vulnerable and Marginalised Children in Egypt project, which will be applied with the help of UNICEF.

The British ambassador to Egypt, Geoffrey Adams, and UNICEF’s Representative in Egypt, Bruno Maes, signed an agreement on Sunday on the three-year project in the attendance of Tarek Shawky, the minister of education.

The project is planned to reshape the educational system in three underprivileged governorates, which are North and South Sinai, and Ismailia. The agreement comes under the umbrella of the new educational system which applied starting from the academic year 2018/19.

“These three governorates were selected to implement the project because they are the most troubled when it comes to the educational system. That is due to their large geographical areas, and the unstable political situations in some of them,” Shawky told Daily News Egypt.

Moreover, Shawky explained that the educational services in these three areas, especially in North Sinai, are very poor, not to mention that children skip most of the semester and are required to change their schools several times due to displacement.”

He further asserted that even teachers in these areas did not have the chance to be properly trained. The project targets enhancing the provided services for 80,000 students and 12,000 teachers. It will also reach 550 schools in these three governorates.

Explaining the reasons behind the allocation, the British ambassador to Egypt, Geoffrey Adams,

told Daily News Egypt that the programme is to support Egyptian children who are disadvantaged, and who do have access to the same level of education offered in big cities.

“We are delighted that Egypt is embarking on a really serious educational reform programme, and we support that programme from the start. Egypt will not achieve any of its ambitions for 2030 without good education, and it will reach the children who most need our help,” he said.

For his side, Maes told DNE that this project comes as part of supporting the ministry’s programme of transforming the educational system. He noted, “This project is an outcome from all the partners in order to support the schools through physical rehabilitation, and by improving schools’ teaching materials, in addition to offering trainings to the teachers themselves.”

Moreover, UNICEF’s Representative in Egypt stated that the project is still in the inception phase, and it will be effective within four months. “We are currently communicating with the ministry of education to ensure that our support reach both students and teachers,” he added.

He pointed out in a press release, “UNICEF focuses in this project on enhancing what schools can provide, which-in addition to teaching-includes extracurricular activities and the engagement of parents and communities with their local education systems.”

Finally, Adams concluded, “The UK has long been Egypt’s partner in this field, and now we are delivering our promise to extend our partnership by supporting the government in reforming its education system. With this agreement, Egyptian students will be equipped with the knowledge and skills they need to succeed.”