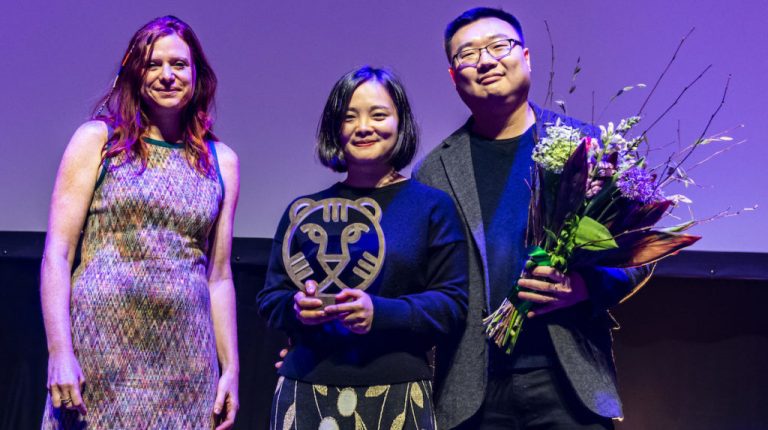 Present Perfect is a US/Hong Kong co-production. The IFFR’s jury said it was “a daring film that takes us to places where we have never been, brings to light characters that want and need to be seen, expanding the language of cinema to a new grammar, using the new-found footage of this millennium.”

Meanwhile, the Dutch filmmaker Ena Sendijarević won the Special Jury award for Take Me Somewhere Nice. The jury’s report said that “the exceptional artistic achievement is for the director who portrayed a journey through a unique and very precise personal vision with humour and a deep sense of history.”  The jury included Alfredo Jaar, Daniela Michel, Susanna Nicchiarelli, Pimpaka Towira, and Katriel Schory

In congratulating all winners, the festival’s director, Bero Beyer, said: “These filmmakers don’t just show that independent cinema is alive and kicking, but that they are able to explore new cinematic grounds. We thank them for their courage and passion.”

The International Federation of Film Critics (FIPRESCI) award went to End of Season by Elmar Imanov. The KNF award, presented by the Circle of Dutch Film Journalists, went to Tarde Para Morir Joven by Dominga Sotomayor.

Last Night I Saw You Smiling by Kavich Neang won the Network for the Promotion of Asian Cinema (NETPAC) award for best Asian film premiering at the festival. The winner of the IFFR Youth Jury award was Lazzaro Felice by Alice Rohrwacher from Italy. Filipe Martins won the Voices Short award for Casa de Vidro, while Kodak by Andrew Norman Wilson won the Found Footage award.

The Tiger award is the IFFR’s most prestigious award and includes a financial prize of €40,000 that shall be divided between filmmaker and producer. The Tiger award jury also chooses an outstanding artistic achievement within the Tiger competition to receive a Special Jury award worth €10,000.

As for the Bright Future award, it was allocated to filmmakers presenting the world or international premiere of their first feature-length film in the Bright Future main programme who are eligible for the Bright Future award worth €10,000. Aya Koretzky’s film A Volta ao Mundo Quando Tinhas 30 Anos won the award. The jury said that “Koretzky’s film about gardening and travelling, about openness and curiosity. A strong cinematic approach to an intimate and poetic journey with a superb sound design merging perfectly with the images in every second.”

The jury also gave a special mention to Historia de mi nombre, a documentary relating to a personal story and the history of a country underlining at the same time the importance of images to preserve memory. The jury was consisted of Sata Cissokho, Beatrice Fiorentina, and Christoph Friedel.

Also, the VPRO Big Screen award winner was chosen by an audience jury of five film fanatics. The film won a guaranteed screening in Dutch theatres and will be broadcast on Dutch public television channel NPO 2. Of the €30,000 prize, about €15,000 was spent on the winning film’s theatrical release and €15,000 went for the production of the filmmaker’s next project.

The winning film was Transnistra by Anna. The jury described the film as a “beautiful, intimate portrait. The amazing characters in this coming-of-age film made us relive our own memories through recognisable themes, such as self-assertiveness, feeling lost, being in love, and feeling reckless.” It added that the director managed to capture these feelings, making an excellent use of colour, shots, and great music. “This film proves it’s possible to accomplish great things with little resources. We can’t wait to see the director’s next move,” the jury added. The jury included Vlada Brenici, Annelies Groot, Keston Pollard, Dorien Riswick-Keultjes, and Marinko Saponja.

Another prize is the Voices Short award for narrative-driven short films from the festival’s Voices section. The IFFR 2019 screened five different Voices short compilations, totalling over 20 films from 18 countries. The audience chose the winner (€2,500 prize) through using voting cards. The winning film Casa de vidro was directed by Filipe Martins from Portugal.

Similarly, the FIPRESCI award is given to the filmmaker of the best film among all the world premieres in Bright Future (excluding the Tiger Competition), by the jury of the FIPRESCI.

The winning film is End of Season by Elmar Imanov. The jury said that “For its deeply mysterious depiction of familial disintegration, its frequently surprising narrative angularity, and its refreshingly evocation of a world in which every home is a private chamber of frustrated desire – most especially for women.” The jury included Kristin Aalen, Renata Habets, Rasha Hosny, José Antonio Teodoro, and Giovanni Vimercati in the competition.

The NETPAC award is awarded to the best Asian feature film world premiering at IFFR 2019 by a jury from the Network for the Promotion of Asian Cinema. Kavich Neang’s Last Night I Saw You Smiling won the award.

The jury’s report said: “Putting people in front of politics, this visually poised and polished documentary is a brave attempt in revealing the collapse of a society undergoing drastic transformation. At once specific in terms of the place it is set in but also universal in its reflections of how disenfranchised people confront the past and the present, the filmmaker invites the audience to enter both the soul of his family and also that of his country.” The jury included Diana Ashimova, Lee Sang-yong, and Clarence Tsui.

The KNF award is given to the best Dutch, or Dutch co-produced, feature film at IFFR. The winner is selected by a jury of the ‘Circle of Dutch Film Journalists’. The winning film is Tarde para morir joven by Dominga Sotomayor.

The jury’s report said: “We would like to award the modest honour of the prize from the Dutch film critics to a film that is also modest but at the same time incredibly broad in its recognisability: a story that is set almost 20 years ago, but is just as pungent today. Under the steady and impressive direction, the leading role is played by an incredible talent, in this sensory coming-of-age film. As Mazzy Star sang in ‘Fade Into You’, we faded into Tarde para morir joven and wanted to stay in this moment with the protagonist played by Demian Hernández forever.”

The Jury report said: “After a long and passionate discussion, we are happy as Lazzaro to present the IFFR Youth Jury award to Alice Rohrwacher for her outstanding achievement: Lazzaro Felice. A surreal experience, Lazzaro Felice fits perfectly with this year’s theme: feel IFFR. The original and allegorical story about the pure and innocent Lazzaro moved us.”

It added “We were captivated by Hélène Louvart’s cinematography, carried away by the soundtrack, detailed characters and Rohrwacher’s masterful direction. We believe that Lazzaro will inspire a future audience to be more humane and reflect on their daily experiences and interactions. It is not only an enchanting film experience, but also a beautiful depiction of humanity and the course of its progress.”

Finally, the Found Footage award, which is granted to a filmmaker who has made outstanding use of archive material, was given to Kodak by Andrew Norman Wilson.  The award, worth €2,500, is supported by the Netherlands Institute for Sound and Vision.

The jury said: “For its innovative use of a very diverse range of archival audio and visual sources; for its dense and layered framing of these materials; for the way it weaves together a family narrative with the broader history of an industry; for its poetic, literary and historical ambition in chronicling the trajectory of an entire medium; for pushing cinematic, narrative and theoretical boundaries in the use of found footage.”