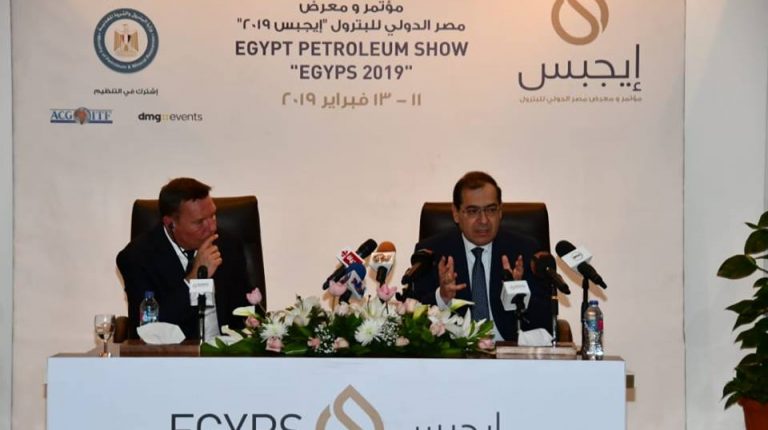 The ministry of petroleum estimated the natural decline in Egypt’s gas production by 20-25% per year, however compensated for by new fields coming on stream while sustaining explore and development operations to increase production rates.

The Minister of Petroleum and Mineral Resources, Tarek El-Molla, stressed that his ministry will complete the payment of foreign partners’ dues this year, pointing out that foreign partners’ entitlements reached about $1.2bn at the end of the fiscal year (FY) 2017/18.

During the preparatory conference for the Egypt Petroleum Show 2019 (EGYPS), El-Molla said that the value of the dues owed to foreign partners will be announced by the end of FY 2018/19.

He noted that his ministry plans to renew its contract for importing Iraqi crude oil for another year with the same quantities.

Egypt has reached an agreement with Iraq in April 2017, under which Baghdad sells 12m barrels of oil to Egypt per year, and the contract was renewed for one more year.

El-Molla pointed out that Egypt’s current gas production amounted to about 6.5bn cubic feet per day, adding that about 450m cubic feet of gas will be added from the fields of Giza and Fayoum within 72 hours.

Furthermore, he added that it is planned to keep the country’s only gasification station in the coming period, in order to secure the local market’s needs. “If anything happened, we are ready to import gas,” he stressed.

The Singapore-Norwegian company BW Gas won a previous tender to supply Egypt with its second gasification vessel. The vessel arrived in October 2015 and started operations in November in the same year. It is now the only gasification vessel in Egypt.

According to El-Molla, the next meeting of the Eastern Mediterranean Gas Forum, which serves as the umbrella for cooperation and dialogue regarding the development of gas resources in the region, will be held in April.

Moreover, Egypt intends to provide Lebanon with its needs of gas, El-Molla said, however his ministry needs to review some technical issues.

The Lebanese Minister of Energy and Water, Cesar Abi Khalil, expressed his country’s desire to resume importing Egyptian gas in the framework of the 2009 contract between the two countries.

On the other hand, El-Molla revealed that the results of the tender posed by the Egyptian General Petroleum Corporation (EGPC) for gas exploration in the Red Sea will be announced next week.

Meanwhile, the EGYPS will take place from 11 to 13 February in Cairo at the Egypt International Exhibition Centre with an expanded exhibition space attracting 20,000 attendees from 40 countries to identify opportunities from Egypt and Mediterranean’s future project requirements, strategic priorities, and gain insights into the wider North African oil and gas sector.