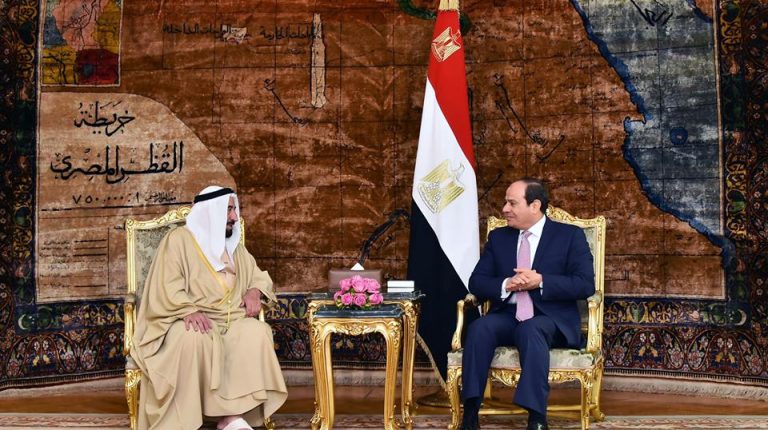 During the meeting, Al-Sisi asserted the strength of the historical relations with the UAE, expressing his appreciation of the Emirati efforts in supporting Egypt.

For Al-Qasimi, he praised Egypt’s role in dealing with the Arab issues, as well as Egypt’s policies on the local and regional levels.

On another matter, Al-Sisi held a meeting with the Governor of Port Said, Adel Al-Ghadban, and the Prime Minister, Mostafa Madbouly, as well as with other top government officials, a statement from the presidency said.

During the meeting, Al-Ghadban reviewed Port Said’s most important accomplishments in all fields since 2014. The mentioned projects, which are worth EGP 462.3bn, included a project to develop east Port Said, as well as to establish an industrial and a trade zone in the governate, according to the statement.

Furthermore, the projects included building fish farms on an area of 80m metres which aim to produce 55 daily tonnes of fish.

Meanwhile, he reviewed other projects in the fields of industry, energy, electricity, sewage, desalinisation, in addition to developing informal housing areas, as well as building 7,316 housing units in order to offer residents a decent life.

For Al-Sisi, he called on all state officials and bodies to deal with the challenges which face the governate in implementing its ongoing projects.