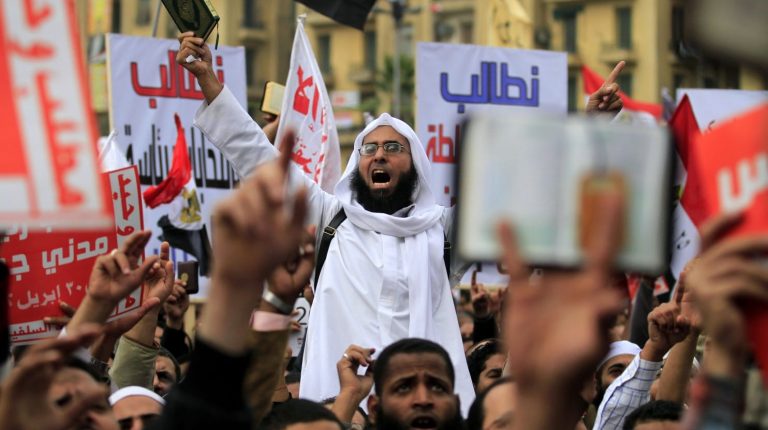 The coalition of Islamist parties and groups which took place in 2012 which included the Muslim Brotherhood, the Nour Salafist Party, and other Islamist parties, was divided and broken after the forced ouster of former Islamist President Mohamed Morsi in July 2013. This led to the division of the Islamist movement into two groups, those who are for Morsi, and those who are against.

The first team included a coalition of Islamist parties which gathered all Islamist parties under the banner of the Brotherhood, while the second included Al-Nour Party. The article will examine what happened to these two coalitions since the 2013.

The Brotherhood camp and the National Alliance for Supporting Legitimacy

The first coalition which called itself The National Alliance for Supporting Legitimacy, defended Morsi and called for his return and demanded that security forces be held accountable for violence committed since the ouster of the Brotherhood-affiliated president. However, from 2013 to 2015, the alliance was weakened both by legal and physical manoeuvres by the government, where it banned several of the parties in it, and cracked down on its members and its activities. Eventually, as the years passed, and as hundreds of them were arrested, their activities became very rare, and their organisational capacity became null.  Inside this coalition, four parties will be examined.

One of this coalition’s main pillars was the Brotherhood’s political wing, the Freedom and Justice Party (FJP) which was banned and had all its assets confiscated.

The Brotherhood itself was labelled a terrorist organisation in 2013, following a court decision that banned the group, thus making it accountable under Article 86 of the Egyptian penal code.

Furthermore, the government banned all the movement’s activities and froze all its assets, along with the assets of its members, as the government accused the movement of responsibility for the attacks which targeted security forces in the past five years, since the ouster of Morsi.

Many members of the outlawed group have been laid off from various syndicates, charity groups, and mosques, and had their assets frozen. Currently, belonging to the group or indicating support to it is considered a crime.

Also, members include the Supreme Guide of the Muslim Brotherhood Mohamed Badie, prominent leader in the Freedom and Justice Party, Mohamed Al-Beltagy, former head of the Parliament Saad El-Katatny, as well as other members in the Supreme Guide Bureau. Hundreds of the group’s members are currently imprisoned and are standing trial in dozens of cases, mostly related to violence, inciting sectarianism, and terrorism. 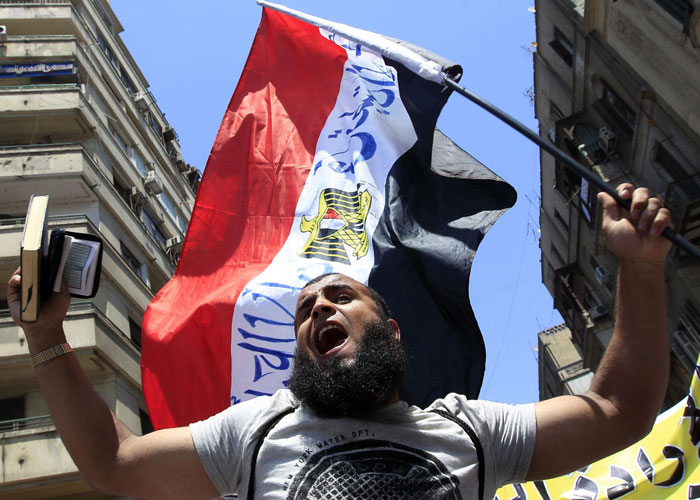 Al-Sisi’s statements came after the Brotherhood presented in April of the same year an initiative for a proposed national reconciliation calling for a fresh presidential election describing it as “a way-out of the country’s lingering political crisis.”

“The best way-out of this dark tunnel is the return of President Morsi to power to chair a coalition government agreed upon by national powers for a specific and sufficient period of time to prepare the country for a fair election supervised by an independent judicial entity…without exclusion of any party,” the group said.

Since the ouster of the group, the government has not directly or openly proposed any reconciliation initiatives.

Several reconciliation initiatives have been proposed by prominent politicians such as Abdel Moneim Abul Fotouh, who proposed holding a referendum to gauge approvals of the roadmap, and Mohamed Selim Al-Awwa who proposed the appointment of a new prime minister who is ‘everyone approves of’ and has the president’s powers.

Another two Islamist parties, Al-Wasat and Al-Watan, withdrew from The National Alliance for Supporting Legitimacy in 2014 and 2015. Both parties denied not to take part in any future elections, and have been inactive ever since, in an attempt to build a more diverse and wide umbrella to ensure national reconciliation, and a successful transition to end all disputes in the political scene.

The last party in this list is the Building and Development Party, the political faction of Al-Jamaa Al-Islamiya group. In 2018, the party and the group both suffered a decisive blow when in November 2018, Egyptian authorities added 164 leaders and members of the group to the country’s designated terror lists for five years. It included Mohammed Shawki Al-Islambouli, brother of Khalid Al-Islambouli, the assassin of the late Egyptian president Anwar Sadat, as well as Tariq Al-Zomor and Assem Abdel Majid. State media reported at the time that, the court said that the decision came after “the disclosure of attempts by the leaders of the group to revive its terror activities.”

Al-Jamaa Al-Islamiya shifted from militancy in 1996 after making ideological revisions and reaching a conclusion to stop considering the state as an enemy. During the 1980s and 1990s, the group entered a bloody conflict with the state, leading to the death of dozens of security forces, citizens, and group members.

After the revision, the group began preaching and performing social works in Upper Egypt and impoverished areas of Cairo and Giza. After the 25 January Revolution, they invaded the political scene through a political party called the Building and Development Party.

The latest activity of the party has been calling for ending the state of violence in the Sinai Peninsula, by appealing to Al-Azhar, calling for its intervention to adopt this initiative and work on modifying it to reach its goal.

The initiative started with asserting that continued bloodshed in Sinai fuels more vendettas, which will incite more conflict and heavy casualties. It also warned against the danger the conflict poses, as it “weakens the first line of defence with the Zionist entity.” 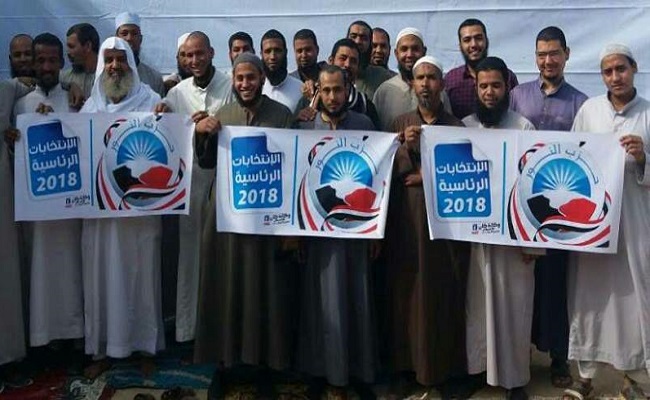 The party similarly warned that the conflict might cause foreign intervention, the expansion of the insurgency to the Delta, a chance for “takfiri” extremist thoughts to rise, and an effect on the economic structure of the country, as well as an effect on the sovereignty of the state. The party said that the reconciliation plan is divided into four steps: containing the crisis, pointing out the problems and solutions, setting a timetable, and forming a resolution.

The first suggested step entails that the militant groups declare a ceasefire starting 25 April, in exchange for the government stopping its military raids, as well as ending distortion campaigns, which allegedly question the patriotism of Sinai locals.

The second step includes dialogue, holding a conference to study the needs and demands of the Sinai residents, ending the state of emergency, limiting strict security operations, and freeing detainees who are not involved in terrorism-related cases. Finally, it entailed the return of deported civilians, both Muslims and Christians.

The third step includes dropping charges against Sinai civilians, positioning a moral code for the press when handling the situation in Sinai, and putting a development plan for the region.

As for the fourth and last step, it entails forming a national council from among the Sinai locals, which would announce the names of Sinai locals to be pardoned by the state and to place guarantees to the conflicting sides to remain in peace.

The party ended the proposal by calling on various parties, state institutions, and personnel to discuss this initiative for the common good of the nation.

The second coalition was the Al-Nour Party, which has been a  strong supporter of the current regime, and has been remained untouched as it continue to back the government of President Abdel Fattah Al-Sisi, making it the only party to survive the government crackdown on Islamist parties.

Al-Nour Party is the only major Islamist party that has actively participated in the transition following former president Morsi’s ouster, and was a part of the process of redrafting the constitution passed in 2012.

In the lead-up to Morsi’s ouster, Al-Nour Party officially remained neutral, refraining from demonstrating with those siding with the Islamist president or those calling for early presidential elections.

Al-Nour Party is the political wing of the conservative preaching group Salafi Da’awa.

In several statements, Al-Nour Party listed an extensive list of issues that it saw as priorities. It demanded that the government have a plan to “achieve national reconciliation and restore cohesion to the Egyptian people by the standards of transitional justice” and to engage the youth in political participation. The party also demanded the implementation of investigations by neutral fact-finding committees for events after 3 July 2013, while formulating ways to respond to armed groups in a just manner.

Al-Nour Party also demanded the “development of police and security apparatus in order to achieve security and discipline within the framework of the law and respect for human rights.” For social issues, Al-Nour Party believes the government would need to face the “crisis of moral chaos in the Egyptian street” and illicit drug trade.

As for foreign policy, the Salafi party outlined seven points for foreign policy that included water security, dealing with Ethiopia’s Grand Renaissance Dam and taking important roles in resolving issues in Palestine and Syria. Al-Nour Party also said it welcomed relations with Iran, but “without opening ports to the Shi’a tide”, which it said posted a threat to Egypt’s national fabric and national security.

In 2014, the party has also announced on that they will vote “yes” in the constitutional referendum and asked the Egyptian people to do so as a way to “take an important step towards fulfilling stability in the country”.

Also in the same year, it announced it would back the then Military Chief Abdel Fattah Al-Sisi in the presidential elections. It called on the Egyptian people to “actively participate” in the elections. In a statement at the time, it said that “active participation of the people in choosing its institutions is one of the most important gains of the 25 January Revolution.”