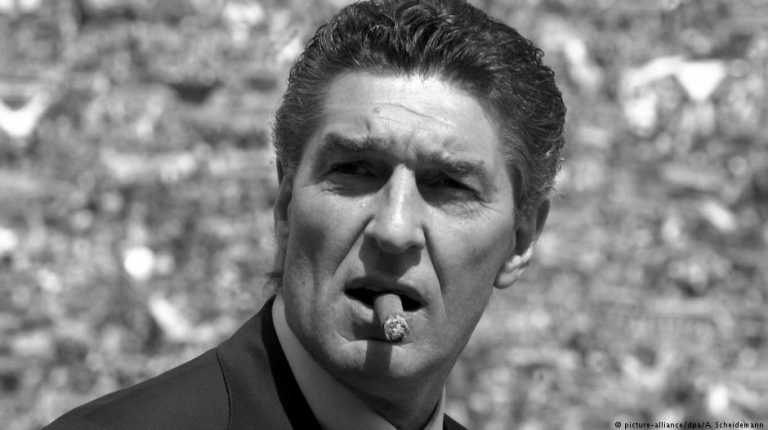 An inimitable character, Rudi Assauer left his mark on the hearts of fans of Schalke and the entire Bundesliga. In going public with his battle with Alzheimer’s, he raised awareness of the disease.Had he been around to witness it, this was a moment former Schalke general manager Rudi Assauer would have relished. His name, sung over and over by fans in the north stand of the Veltins Arena, filled the evening air as Schalke’s 4-1 victory over Fortuna Düsseldorf in the German Cup on Wednesday was reduced to a mere sub-plot.

There’ll be more tributes to come from the club he served for such a large part of his life. Assauer loved Schalke, and was a leading figure at the club for almost two decades. Under his careful guidance, the Royal Blues emerged from a difficult financial situation to win a UEFA Cup in 1997. He was there, too, for the club's famous "Champions of Hearts" campaign of 2000-01, a season unrivalled in terms of drama.

"We all know we wouldn't be here if it wasn’t for Rudi," said the Schalke chairman, Clemens Tönnies, ahead of the Düsseldorf match. "Rudi was the architect of modern-day Schalke." Tönnies delivered this message down on the pitch of the stadium that Assauer was the driving force in getting built.

Finding a home at Schalke

Assauer grew up in the town of Harten in Germany's Ruhr region, where the economy was long dominated by mining. Air quality was poor and hard graft was a way of life, but Assauer spent his early years out on the streets playing football. At 14, he began an apprenticeship as a steel fitter, but lasted only six months. A spell as a bank clerk apprentice followed but, for Assauer, there was only ever only going to be one career.

He won the European Cup as a player with Borussia Dortmund in 1966, but it was as a manager he found his true calling. Assauer was always a kid from the street, and led his clubs with the same mentality. The fans loved him. Michael Meier, the former Borussia Dortmund general manager, nicknamed him the "Kashmir Hooligan." He was a man who never shirked responsibility, and did everything asked of him, usually with his trademark cigar poking out one corner of his mouth.

A man who never minced his workds

"Der Assi" as he was respectfully but lovingly known to all, enjoyed the reputation of being a hard man, and he wasn't one to mince his words when the situation called for it.

"Only when the snow has melted can you see where the excrement lies," he once remarked, when asked about the Robert Hoyzer betting scandal which rocked German football in 2005.

Of the club he loved, he once said: "Either I’ll break Schalke or Schalke will break me."

Once a week he could be found playing indoor football with a few friends and local journalists. It wasn't out of the ordinary for the latter to learn which articles he considered "a load of crap." Once he said it, however, he considered the case closed. He never cancelled a session once. After playing, he#d return to his home – on Crangerstrasse in Gelsenkirchen – and relax to some of his favourite golden oldies on the radio.

However, Rudi Assauer was a far more sensitive man than most people knew. He took care of and fiercely protected those who were important to him. The club's staff and players were considered family. He could be difficult with them but always took on the role of loving father.

"I owe him so much as a footballer but also as a person," said former Schalke player Gerald Asamoah on Wednesday. "Whenever I felt bad I could call him. He was always there for me. A fighter to the end."

It’s ironic, almost, that Assauer of all people was diagnosed with Alzheimer's disease. A fearless man in most regards, Assauer was terrified of nothing more than developing the disease that also took his father at an early age.

"My brain no longer works," he said, after being diagnosed in 2012. "It's not getting any better, it's getting worse. I have to come to terms with it."

Alzheimer’s disease is a form of dementia that affects around 1.7 million people in Germany. Every year, around 300,00 new cases are diagnosed.

His departure from Schalke in 2006 was a bitter one. He felt as if a member of his own family had betrayed him. Assauer felt disrespected, but the club had noticed signs of his illness and decided to offer him an alternative role at the club. He refused to be given a presidential role out of defiance. He felt he was being chased out of his the club he loved with all his heart.

He never got over what he felt was a betrayal by the club's hierarchy, but remained a loyal supporter and attended games until the middle of last year, when his illness finally prevented him from doing so. Despite everything that had happened, he couldn’t abandon the love of his life.

On Wednesday afternoon, Assauer lost his long and exhausting battle against the illness. The last great "macho" of German football died at the age of 74.