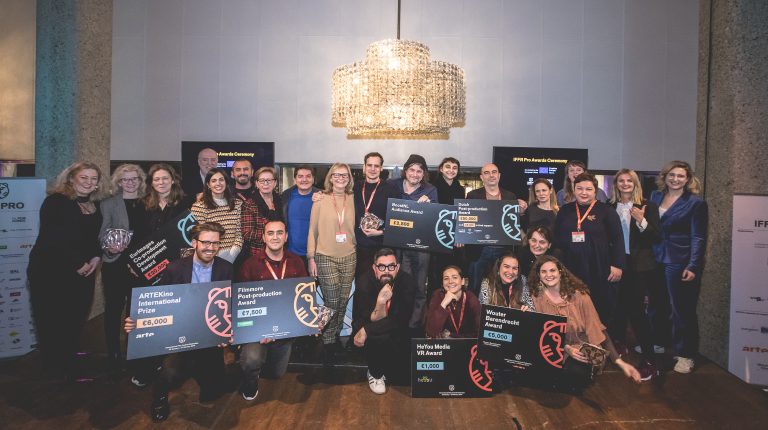 Presented for the first time this edition, the Dutch Post-production Awards are a collaboration between the Hubert Bals Fund, the Netherlands Film Fund, and the Netherlands Post production Alliance. Out of a selection of six nominations, a professional jury chose two winners who each receive an award worth €50,000, which is to be spent on post-production in the Netherlands, and an additional €5,000 in kind.

The winning projects included days of Cannibalism by Teboho Edkins and Lotus Position by Liu Shu. The jury said that the Days of Cannibalism is striking by smart, funny, fascinating and innovative documentary, and impressed by the way director is creating a documentary using a fiction narrative to produce a film that goes beyond presence.

Meanwhile the jury report on Lotus Position said that the film is inspired by the tradition of the Hubert Bals Fund to support urgent and remarkable films. The jury was moved to use this prize where it could be most effective and make a real difference. In this case, we chose to support a courageous filmmaker to complete her film which without this support may not be realised.

The jury members are Sandro Fiorin, Gurvinder Singh, and Jane Williams. As for the Eurimages Co-Production Development award which is worth €20,000 given to one of the selected CineMart projects that is, or will be, a European co-production. The winning project was Stillborn by Olga Chajdas. The jury report said that “there was a very vivid discussion among the jury members, but in the end, we unanimously chose a project which reflects on recent European history and is carried by a female character with a young and vibrant heart. A national story with an international impact.”

“The director’s visual style, her determination, and approach to the recent history of her nation makes the jury confident that this film will travel over many borders,” the jury said. The jury included Majlinda Tafa, Constanza Arena, and Frans van Gestel.

As for the CineMart post-production award by Visual Effects & Post Production lab Filmmore comes with a €7,500 prize. The winning project was A House in Jerusalem by Muayad Alayan.

The jury report said “a House in Jerusalem sets out as an ordinary film about a girl who, after the death of her mother, longs for the happy past while facing a painful future. Soon the film is injected with supernatural elements. The loss of a doll sets in motion a search for the mother of a ghost. Present and past, realism and supernatural- a house in Jerusalem is a powerful story about universal human experiences, told through the innocent eyes of children.”

The ARTEKino International prize is worth €6,000 and is given to the producer of the best CineMart project to support its financial development. The winning project is La fiebre by Mateo Bendesky.

The jury report mentioned that the film is a tale of adolescence and discovery of personal freedom. “It tells the story of a teenager oppressed by her strict and religious family who tries to escape this oppressive environment. This important contemporary subject is treated with an original and convincing artistic vision,” the report added. The jury members included Annamaria Lodato, Johannes Rexin, and Anton Scholten.

The announced winning project was La hija de todas las rabias by Laura Baumeister. The jury report said that this film was the first feature in Nicaragua made by Nicaraguans. The jury added that the film included at the first sight totally depressing topic loses its heaviness by the general approach, written from the point of view of a young but resilient girl ready to turn dystopia into a manageable reality.”

The Media VR (Virtual Reality) award is a new prize that is €1,000. The jury chose among four VR project pitches presented at IFFR Pro x VR Days, but the winning project was Cosmos Within Us by Tupac Martir

The jury report described as a film that is clearly pushing all boundaries, and a film that “is very well thought through and tackles a difficult theme in a way that completely lends itself to VR.” The jury members are Antoine Cardon and Barney Steel.

Finally the BoostNL Audience award, which is worth €2,500, and in it the audience jury of film fans picks a winner among the BoostNL projects presented during the BoostNL Spotlight event. The winning project was When We Lost to the Germans by Guido van Driel.