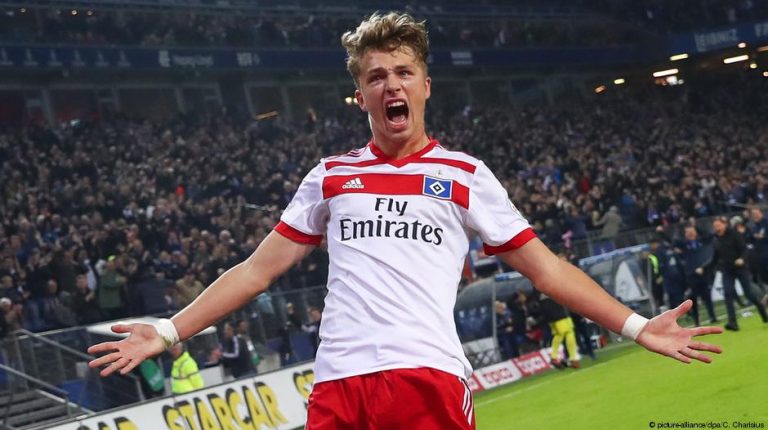 The youngster grabbed headlines with a number of scintillating displays in the Bundesliga last season. Now suffering from second season syndrome, there are concerns Bayern may have been too quick to secure his signature.Comparisons to Miroslav Klose don’t come lightly in Germany. But anybody who watched Jann-Fiete Arp’s emergence in a struggling Hamburg side last season will tell you they were warranted. The 19-year-old managed just two goals in 18 appearances, but played with a maturity and swagger absent in his hapless teammates.

The young German forward did more than simply draw glowing comparisons with the top scorer in World Cup history, though. On Thursday it was revealed that the league's most successful club, Bayern Munich, had snapped him up for around €7.5 million ($8.5 million). He remains at Hamburg for now, with Bayern allowing the player to choose whether he’d like to join at the end of this season, or stay for another twelve months.

Bayern coach Niko Kovac spoke glowingly of the deal on Friday. "I'm certain he'll represent the German national team one day. It's so important for clubs to invest in young players, especially when you can secure a talent like this for a small fee."

At first glance, it’s a move which makes perfect sense: technically gifted Germany youth international secures transfer to Bayern Munich on the back of a series of dazzling performances. While that is the crux of it, to leave the story like that would be overlooking the past six months.

Arp’s stock has fallen since Hamburg’s relegation at the end of last season; the first in the club’s history. Despite struggles with injury, zero goals in 11 league appearances is a poor return for a player some believe is the brightest talent to emerge in Germany for a decade. Arp has failed to score a single league goal in fifteen months, as his performances from last season increasingly resemble a case of beginner's luck at the top level.

“I’ve actually been wondering about that, it’s difficult to say. He had a breathtaking start to his Hamburg career but he’s been poor this season. He appears to be lacking in self-confidence. Perhaps the pressure’s got to him, but it’s a low risk move for Bayern given the price tag,” he says.

Arp is the latest in a number of young signings announced by the serial Bundesliga champions. In the past 12 months Leon Goretzka (23), Alphonso Davies (18) and Benjamin Pavard (23) have also signed for the club, joining a squad already containing Serge Gnabry (23), Kingsley Coman (22) and Joshua Kimmich (23).

It represents a change in policy for Bayern, who have long relied on several stalwarts who appear past their best. Worryingly, the same could be said of youngster Arp even this early in his career, but Ahrens believes it’s the nature of the 2. Bundesliga which has been the biggest stumbling block for him this season.

“It’s more physically demanding and not an easy place to play when you’re 19-years-old," he says. "There are a lot of long balls, the league favors physicality over technical ability. He still has to develop this part of his game.”

Too much too soon?

A move to Bayern then, where technical ability is valued highly, would surely mean a return to top form? Ahrens isn’t so sure, and cites Jan Schlaudraff and Tobias Rau – who rose to prominence with Alemania Aachen and Wolfsburg respectively – as examples of hot prospects who failed to handle the pressure of a big move to Bayern.

“It was much too big a jump for those players,” he explains. “It's too big for Arp, too, in my opinion. He'd be better off going to a club like Eintracht Frankfurt or Hoffenheim first. He was offered the chance to join Bayern last summer and spend the season on loan at Hoffenheim, but he chose not to do that and he’s missed out on a logical step in his career.”

That decision, in hindsight, appears to have been a poor one. Arp would surely have learnt more under the tutelage of Julian Nagelsmann, one of Germany’s most progressive young coaches, in a team built on the ethics of hard work and tactical discipline, than in the kick and rush environment of Germany's second division.

A big issue facing Arp at Bayern will be game time. The Bayern youngsters mentioned above, all wingers and midfielders with the exception of Pavard, will be battling it out for multiple positions. Bayern only play with one striker, though, and that striker happens to be Robert Lewandoswki, a machine not only in terms of goals but physical conditioning.

"He's not a world class prospect in the same way Jadon Sancho at Borussia Dortmund is," explains Ahrens. "He doesn't demand a spot in the starting lineup and he may struggle to get on the pitch." Staying at HSV for another season is not an option, though, according to Ahrens.

"Even if Hamburg achieve promotion this season, he should leave in the summer. The fans will not react well to the announcement that he signed for Bayern before the start of the season. They'll be upset. I think he should go to Bayern for preseason and try and get a loan to a club like Schalke or Hoffenheim next season."

A poor six month spell before your 20th birthday is not a reliable indication of whether or not you'll be a star at a club like Bayern but Arp would do well to mind the example of Renato Sanches. The Portugese youngster arrived at Bayern on a tidal wave of optimism after starring for Portugal at Euro 2016. Fans were calling for him to be sold less than twelve months after his arrival, however, after he failed to make an impact in his first season.

Arp is not a new arrival to the league though, having already impressed in Germany's top tier last campaign. If he gets the next stage of his career just right, and recaptures the swagger that saw Bayern come knocking in the first place, those comparisons with the great Miroslav Klose might not seem so premature afterall.