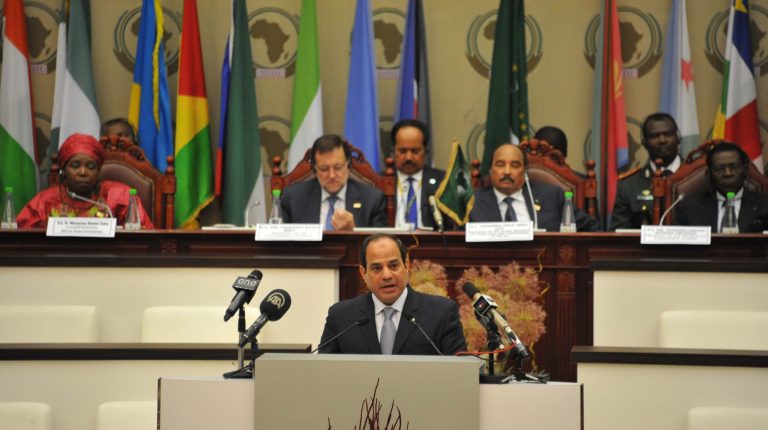 Egypt’s President Abdel Fattah Al-Sisi arrived to Addis Ababa on Saturday in order to assume the chairpersonship of the African Union (AU) for the year 2019.

This marks the first time an Egyptian leader chairs the AU since its establishment in 2002, according to a presidency’s statement.

Al-Sisi will receive the AU’s chairpersonship during the AU summit, and will attend the 32nd Assembly of the Heads of State and Government of the AU.

This is a culmination of Egypt’s efforts under the leadership of Al-Sisi in the recent years in order to strengthen the relations with the African continent, both at bilateral and multilateral levels, and serves as a restoration of Egypt’s pivotal role as one of the founding members of the Organisation of African Unity during the 60’s, said the presidency’s spokesperson, Bassam Rady.

Rady explained that the summit will be held under the theme of ‘Year of Refugees, Returnees, and Internally Displaced People’, which was chosen due to Africa’s efforts to control the influx of returnees and refugees, as well the rise in human trafficking.

The summit will also address issues related to sustainable development which fall under the AU’s 2063 Agenda.  Several important discussions on health, education, innovation, localising technology, as well as the security and safety in the continent will be discussed, in addition to coordinating with international financing corporations and strategic partners of the continent in order to mobilise funds and support, which are needed for Africa’s development.

The African leaders will also review the efforts of reviving African policy for reconstruction and development in post-conflict phases, as well as the activities on combating terrorism and extremism in the continent, and the implementation of the AU’s decision on ‘silencing the guns in Africa by 2020’.