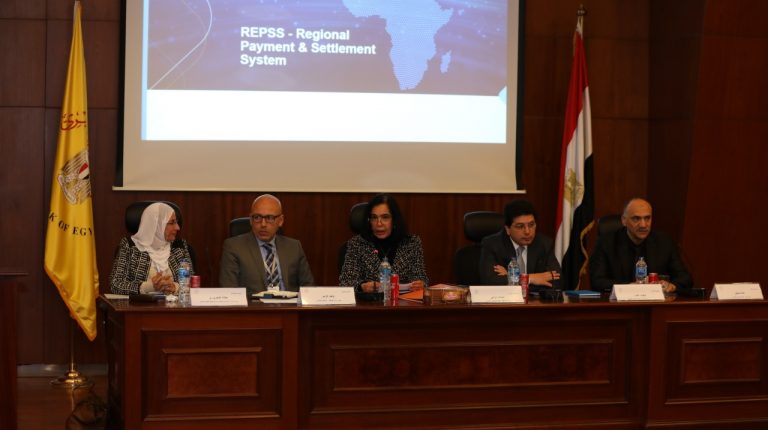 The Central Bank of Egypt (CBE) held on Thursday a workshop in order to introduce the benefits and the mechanism of the Regional Payment and Settlement System (REPSS), as part of its efforts to activate the electronic link system between Egyptian banks and the African member countries of the Common Market for Eastern and Southern Africa (COMESA).

The workshop was attended by 140 members and representatives of the Export Development Authority (EDA), as well as members of the export councils and chambers of commerce, business associations, in addition to many of the companies dealing with the COMESA countries, along with representatives of the African Export-Import Bank (Afreximbank).

Naglaa Nozahie, the CBE’s governor’s adviser for African affairs and the supervisor of the Economic Research Sector, said that the new system will play a role in supporting and developing the economic relations between Egypt and African countries, in addition to facilitating the transfer of funds between the member countries of the system in order to increase the trade exchange between them, as well as to boost the trade between Egypt and the COMESA countries.

She added that the CBE has started a series of workshops, involving all the parties concerned in order to introduce the system, where two workshops were held in October 2017 and February 2018 which were attended by investors, as representatives of several chambers of commerce and the Federation of Egyptian Industries, businesspersons’ associations, and many companies working with the countries of COMESA.

During the workshop, Nozahie made a presentation on the efforts of the CBE in encouraging investment and the intra-African trade.

The presentation included the establishment of a company in order to insure the risks of Egyptian exports, to increase Egypt’s exports of products and services to African countries, to activate and support small and medium industries, and attract foreign investments, as well to increase presence in African markets and open new channels for local banks to be able to lend abroad.

Ehab Nasr, the assistant sub governor for Payment Systems and Business Technology Sector at the CBE, said that the regional clearing and settlement system for the COMESA countries, REPSS, which was launched in May 2017, aims to provide a unified platform in order to link all African COMESA countries through a developed alternative to traditional methods.

He explained that the new system reduces the external banking fees of correspondent banks, and reduces the period of settlement, in addition to increasing confidence among dealers, as a result of the participation of central banks in the system.

Moreover, he pointed out that according to these arrangements, each central bank will carry out the payment and the receipt of remittances belonging to the commercial banks in its respective country, which are carried out with other commercial banks in any of the COMESA countries involved in the system.

According to Nasr, the activation of Egypt’s participation in the system is the result of the continued cooperation in this field between the CBE and the African central banks.

The new system so far includes Egypt, Kenya, Uganda, the Democratic Republic of the Congo, Zambia, Rwanda, Mauritius, Swaziland, and Malawi, while the other member states are expected to join in the coming period.

According to Hala Dakrouri, the head of the Central Administration for Information, Promotion and International Cooperation of the EDA, they aim to facilitate an environment which is conducive to exporters, and to create new generations of them, in order to support and develop Egyptian exports to the African countries and the world.

For his part, Waleed Alzomor, the director of the African Trade Representation at the ministry of trade and industry, pointed out that the ministry pays great attention to all the companies’ and parties’ requirements which deal with African countries, through assisting them in overcoming the obstacles they face in order to support the export of Egyptian products to African markets.

According to Maureen Mba, a representative of Afreximbank, the bank launched the electronic platform for the exchange of metadata and information for African companies and institutions, known as MANSA, which provides data for banks and non-financial institutions, companies, as well as small and medium enterprises in all African countries, in order to reduce the risk and cost of credit (derisking), which leads to the support and activation of the trade exchange in African countries.