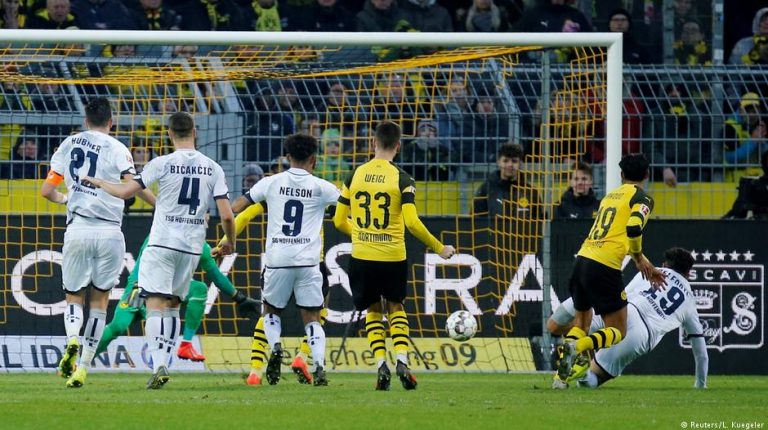 After Borussia Dortmund spectacularly threw a three-goal lead against Hoffenheim, questions about the title race have been asked. DW’s Jonathan Harding thinks it’s defense that will prove key.If Dortmund are to win the Bundesliga title this season, it will be because of their defense not their attack.

There is no denying how good Jadon Sancho and Mario Götze were against Hoffenheim, particularly in the absence of talisman Marco Reus, but Dortmund's defense conceded three goals in the final 23 minutes to turn victory into a draw. It was a reminder that if this defensive unit doesn't hold together, regardless of injury problems, then the title will not be coming to Dortmund.

Achraf Hakimi may play in defense, but it's clear that in Dortmund's system the hope is that his attacking upside outweighs his defensive deficits. Against Hoffenheim, that wasn't the case. Hakimi didn't even notice Pavel Kaderabek for Hoffenheim's second goal and, while the young Moroccan is still developing, such errors are preventable and therefore a problem for Dortmund.

Abdou Diallo failed to deal with the cross that lead to Hoffenheim's opener; perhaps the most concerning defensive moment of the day given Diallo is one of the few real defenders in this team at the moment. For the third goal, the talented Sancho committed the classic sin, a needless foul by an attacker in a dangerous area. From the set-piece, Dortmund failed to get behind the ball and Hoffenheim took advantage. To make matters worse, this all happened on a day when Roman Bürki delivered his latest spectacular performance in a career-best campaign. The Swiss deserves better.

So many goals in modern football are scored in transition or on the break and, given the speed of modern football, this makes defending that much harder. The goals Dortmund conceded against Hoffenheim were not those, however. They were avoidable, and that's what is most concerning.

The return of Manuel Akanji and Dan-Axel Zagadou will help solve some of those issues, mostly by giving Favre more options, but whoever plays, and however experienced they are, this defensive unit cannot afford to concede such goals and drop points in this manner if they're serious about the title.

Dortmund proved, even without Reus, they have players who can deliver in attack. They even proved, without the absent Lucien Favre in the dugout, they still have direction. But without a solid defense, whoever it consists of, they will not stay top of the table.