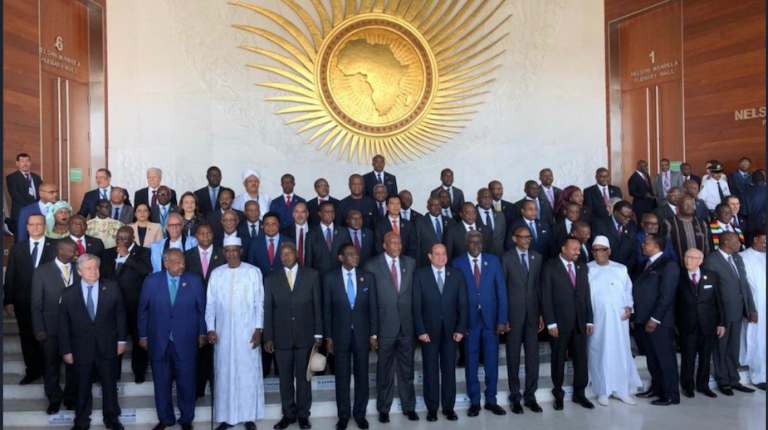 President Abdel Fattah Al-Sisi, the chairperson of the 32nd round of the African Union Summit (AU), said on Sunday that Egypt will work to continue the institutional and financial reformation in the AU, and enhance the union’s ability to meet its people’s demands.

During his speech before the general session of the AU in Addis Ababa in Ethiopia, Al-Sisi stressed that Egypt is aware of the responsibility of presiding over the AU amid a critical international situation, and the presence of conflicts, as well as the war against terrorism, in addition to the rise of challenges which face the concept of the national state, and an increase in people’s ambitions.

Al-Sisi stressed the importance of deepening the principle of ‘African solutions for Africa’s problems’ as the only way to tackle the mutual challenges. “Africa is able to understand its complications and its speciality, so that it is able to find the right solutions which achieve its people’s interests and keep its states from foreign interventions,” he said.

This year’s theme of the summit is ‘Refugees, Returnees, and Internally Displaced Persons: Towards Durable Solutions to Forced Displacement in Africa.’

The president added that the road is still long for ending the conflicts in Africa, noting that Egypt has a plan for ending all disputes in the continent by 2020. He said that Egypt will work in collaboration with other African countries in order to support peace in Africa, and boost the early and effective response for terrorism and its supporters.

Moreover, Al-Sisi announced launching the first version of the ‘Aswan Forum for Peace’ with the purpose of linking development with peace. The forum will be an international and a regional platform for decision makers to meet and discuss the means of linking peace to development.

He also called upon the African women to exert greater efforts to accomplish more achievements.

Furthermore, the Egyptian President called upon the African leaders to work together for reviving the framework policy for constructing and developing the post conflict states in order to recover and build their state institutions.

Al-Sisi pointed out that the spread of conflicts, terrorism, extremism, climate change, water scarcity, and desertification are the main reasons for people to flee their homes. He noted that the number of refugees across the continent reached about 8 million inside the continent, while 18 million others fled Africa.

During the summit, Al-Sisi met with his Sudanese counterpart, Omar Al-Bashir, and the Ethiopian Prime Minister, Abiy Ahmed. The meeting addressed boosting the mutual cooperation and the latest updates regarding the Grand Ethiopian Renaissance Dam. The three leaders agreed to keep the interest of each country, while not harming other countries.