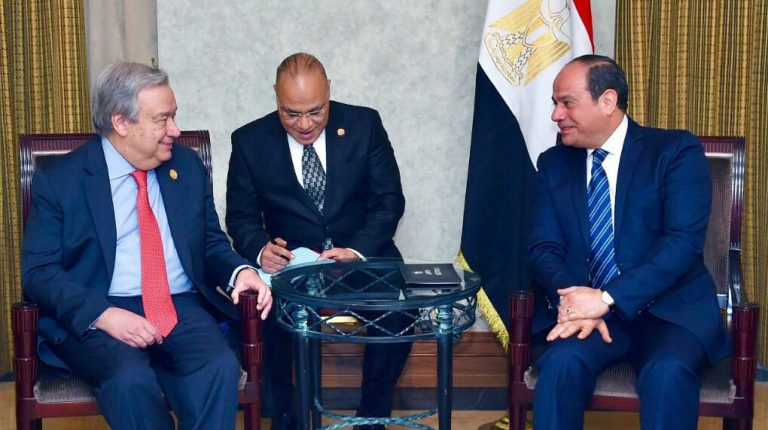 President Abdel Fattah Al-Sisi met on Saturday with the UN Secretary General, António Guterres, during the African Union (AU) summit which is being held in Addis Ababa, Ethiopia.

The meeting addressed the latest updates of a number of regional issues, particularly the situation in Libya, the Horn of Africa, and the Democratic Republic of the Congo. Guterres briefed Al-Sisi on the UN efforts to reach political solutions for these issues, according to a statement from the presidency’s spokesperson, Bassam Rady.

During the meeting, Al-Sisi expressed Egypt’s keenness on enhancing and strengthening the strategic partnership between the UN and the AU during Egypt’s chairpersonship of the AU, within the frameworks of the cooperation between the two organisations, particularly in the areas of peace, security, and development.

Moreover, he briefed Guterres on Egypt’s vision on the priorities and issues which it intends to push forward during its one-year chairpersonship of the AU, which primarily targets continuing the progress made on the implementation of the developmental agendas of both organisations in Africa, and promoting regional integration projects.

They also discussed the exerted efforts for resolving and preventing conflicts across Africa, and to continue enhancing the structure of African peace and security in order to promote the continent’s capacities and mechanisms to preserve its security and stability.

Al-Sisi stressed the importance of continuing the efforts and the coordination at the international level to conduct reforms within the UN, taking into account the importance of Africa’s effective participation in this process. He expressed Egypt’s determination on supporting the work mechanisms in the organisation, in addition to enhancing its effectiveness and performance in order to measure up to the mounting challenges and the current global reality.

For his part, Guterres congratulated Al-Sisi for Egypt’s chairpersonship of the AU, noting that the UN relies on Cairo to consolidate the cooperation and integration with the AU. He expressed his appreciation for the longstanding cooperation between Egypt and the UN, particularly through Egypt’s effective participation in the organisation’s various activities. He also affirmed Egypt’s key role in Africa and the UN’s willingness to support the cooperation with Egypt in order to support Egypt’s development in its turbulent geographic surrounding, as well as to preserve the regional peace and security.

The UN secretary general reviewed the latest developments of the UN reforms, particularly giving priority to preventing conflicts so as to realise sustainable peace and effectuating the developmental system. He valued Egypt’s keenness to continue coordinating and consulting with the UN in order to promote its role.

Furthermore, Al-Sisi discussed the bilateral relations with his counterpart, the President of the Democratic Republic of the Congo (DRC), Félix Tshisekedi. Al-Sisi stressed Egypt’s commitment toward continuing to offer all forms of support to the DRC, which shares with Egypt historical relations which represent a model for cooperation, coordination, and mutual support.

Egypt participates in critical climate discussions ahead of COP26