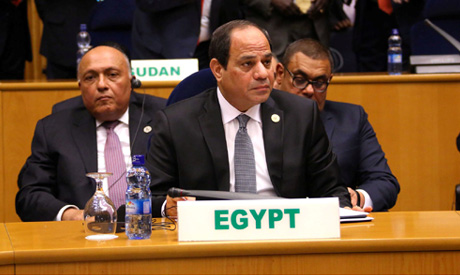 Most Egyptian writers on Sunday’s newspaper issues tackled Egypt’s presidency of the African Union (AU), praising the return of the Egyptian leadership to the continent. Meanwhile, President Abdel Fattah Al-Sisi assumed the presidency of the AU’s during a two-day summit in Addis Ababa on Sunday.

Al-Ahram newspaper’s, Abdel-Mohsen Salama, wrote that Egypt has not chaired the AU since its establishment in 2002, which he believes refers to the coldness of the relations between Cairo and Africa.

In his piece of opinion, Salma inquired from Egypt’s Presidency’s spokesperson, Bassam Rady, about the reasons for the long absence. Rady said that Egypt’s absence came as a result of its engagement into its internal affairs and issues. However, Rady noted that under the rule of Al-Sisi, Egypt restored its position, adding that the relations with African nations observed a surge and an improvement.

Furthermore, Salama cited Rady asserting that Egypt shortly restored its stability and security, as well as its political and economic influence in the region.

Meanwhile, Karam Gabr of Al-Akhbar daily noted that Al-Sisi depends on courage, transparency, and objectivity in his efforts to restore Egypt’s position in Africa. Gabr maintained that Egypt is capable of dealing with the recent African issues, including the consequences of armed conflicts, poverty, and backwardness.

Moreover, in Al-Akhbar, Elham Abu El-Fateh pointed out that Egypt’s presidency of the AU came as a result of Egypt’s and Al-Sisi’s efforts to enhance the relations with its African brothers over the past years.

Likewise, Karim Abdel Salam of Al-Youm Al-Sabaa noted that Al-Sisi has a deep insight that Egypt could not be divided from its African brothers, therefore he worked on restoring its role in the continent.

Abdel Salam added that Egypt’s AU’s presidency will achieve a bright future both for Cairo and the African nations, based on a comprehensive, political, security, and developmental vision.

Furthermore, in Al-Youm Al-Sabaa, Ahmed Selim mentioned that Egypt established the Organisation of African Unity in 1963, inspired by an idea of the late President Gamal Abdel Nasser, and assisted in turning the organisation into the current AU. Selim noted that Egypt returned now after all those years to head Africa, while facing multiple challenges which need to be tackled.