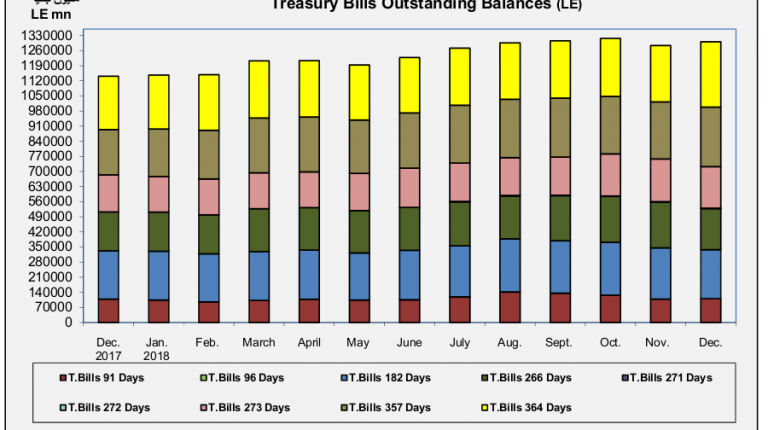 Foreign banks operating in the Egyptian market reduced their investments in government treasury bills by EGP 13.8bn ($722m) in December 2018, according to the Central Bank of Egypt (CBE).

In its recent report, the CBE said that the balances of T-Bills held by these banks dropped to EGP 36.3bn, down from EGP 50.1bn in November 2018.

According to a senior official in one of these branches, this may be due to closing the budgets of the banks and restructuring their financial positions as the year ended, noting that this will be affirmed when the CBE announces the new indicators for January 2019.

The CBE stated that the total balances of T-Bills held by banks operating in the Egyptian market reached EGP 725.92bn, accounting for 55.8% of total T-Bills balances as of the end of 2018.

According to the CBE, the outstanding balances of public sector banks’ investments in T-Bills have recorded EGP 369.08bn in December 2018 against EGP 361.32bn in November, up by EGP 7.75bn.

Meanwhile, the CBE said that foreign customers continue to cut their investments in government debt instruments, where the outstanding balances of foreign investments in T-Bills at the end of December 2018 reached EGP 192.28bn, against EGP 194.47bn, down by EGP 2.192bn.

Foreign investments in Egyptian T-Bills reached their highest level in March 2018 when it hit EGP 380.3bn.

Foreigners’ investments in T-Bills amounted to about $11bn prior to 25 January 2011 before falling to less than $25m at the beginning of 2016.

Foreign investments in T-Bills recovered after the flotation of the Egyptian pound on 3 November 2016 and the subsequent rise in interest rates on the pound, but it began to decline since April 2018 as the emerging markets crisis began, which reduced the confidence of interest traders in emerging market economies in general, including Egypt.

In another report, the CBE said that foreign capital outflows from emerging countries stemmed from concerns about the outlook for economic growth in those countries, as well as global trade policy tensions, a tightening of global financial conditions and weak macroeconomic structure in some emerging countries.

At the end of November 2018, the CBE decided to cancel the mechanism of guaranteeing the entry and exit of foreign investments as of 4 December 2018.

The CBE Governor, Tarek Amer, said that the decision had been planned since the flotation of the local currency and was to contribute to the influx of foreign indirect investment into the banking sector.