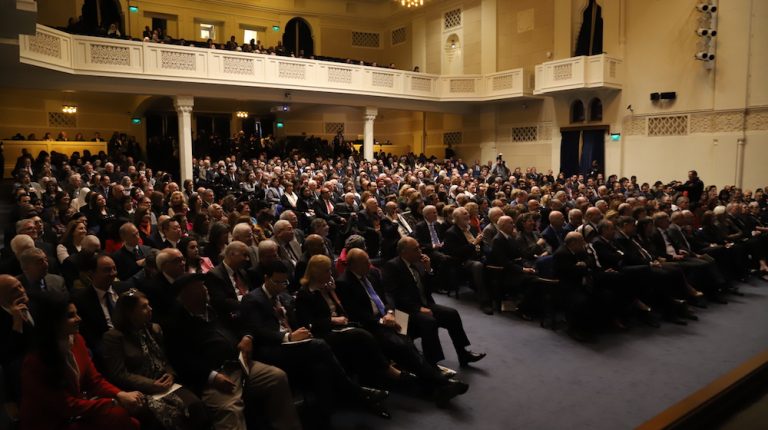 For 100 years, The American University in Cairo (AUC) has been an educational hub which brought the world some of the most prominent intellectuals, as well as has been a home to several hardworking and world-changing figures who managed to reshape Egypt’s modern history in the different fields. The long-established university celebrated its centennial on Saturday, with inaugurating the city’s most developed cultural platform with the latest modern facilities, which is the Tahrir Cultural Centre (TCC).

“This is not an investment. I invested money in the centre without expecting anything in return,” Sawiris told Daily News Egypt (DNE).

Driven by his passion for the arts, which stemmed from his visits to AUC’s Ewart Memorial Hall to watch his favourite bands playing music, and sometimes a movie, Sawiris funded the AUC’s TCC, turning it into a captivating and a well-equipped centre.

Moreover, Sawiris stressed that investment in cultural hubs is a significantly required step from non-governmental organisations. “Whether it is a donation or an investment, it is needed!” he added.

Despite stating that his work at the centre was limited to “renovating the buildings, and assigning the management of the cultural centre,” he is expecting that the TCC will revive theatre, art, and music. He explained that the TCC will also be “a hub for young and upcoming musical bands.”

During his speech at the opening ceremony of the event, Sawiris stated that funding the TCC is his way of showing gratitude for the AUC, for providing Egypt with the most qualified cadres whom his organisations instantly hire. He also stressed on the role which culture plays in shaping the younger generations as much as education does.

‘Nothing promotes a country more than its youth, and nothing can educate youth as much as culture does,” he explained. From his side, AUC’s President, Francis J Ricciardone, stated that the AUC is dedicated to revive all the parts of arts and culture in Egypt through the establishment of the TCC.

Noteworthy, the first phase of the TCC will have a space for six art exhibitions.

“The TCC will be a central hub and a significant establishment, not only in Cairo, but in the entire Arab world,” he added.

The centennial ceremony was presented by Jasmine Zaky, a TV presenter who is also one of the AUC’s alumni.

The celebration ceremony was attended by dozens of AUC graduates who succeeded in achieving remarkable accomplishments, including Lamis El-Hadidy, Mona El-Shazly, singer Hesham Abbas, and the adventurer Omar Samra, the first Egyptian to climb Mount Everest.

“The AUC has been investing in the cultural scene in Egypt since its beginning. This step is definitely a bigger step toward consolidating all of the efforts under one roof, which I believe to be very exciting for those who have a passion for the art scene in Egypt,” Samra told DNE.

While most of the females during the middle of the 20th century cared the most about establishing a house of their own and being crowned with the social label of being a good housewife, Doria Shafik, an Egyptian poet, fought for her peers to have an equivalent life to men, including the right to vote. Rebelling against all the social restrictions and taboos, her revolutionary fight ended with her wining what was once believed an impossible war, guaranteeing females their rights, and stating those rights in the Constitution.

In its first public art exhibition, the TCC hosted Bent El-Nil (The Daughter of the Nile), an art exhibition by Sherine Guirguis which aims to honour the memory of Shafik.

The Daughter of the Nile is one of the two exhibitions which the TCC opened its doors do for its first time in order to welcome the visitors, along with ‘When Dreams Call for Silence’, by the artist Huda Lotfy.

In her first exhibitions ever taking place in Cairo, Guirguis honoured the memory of the Egyptian icon, through a number of abstract art portraits, featuring the remarkable achievements which marked Shafik’s journey, with alluring bright colours painted on a white background.

“It all started when I read Shafik’s name on a small note written in a book on feminism movements in Egypt. Digging more into her history, I discovered that Shafik revolutionised women’s status in Egypt. Nonetheless, her work was forgotten and very few people know about her,” Guirguis told DNE.

Shafik captured Guirguis’s heart with her strength, which was covered by her womanly elegance, charming look, and peaceful eyes. She was shocked with the fact that history tells few information about her, with almost scarce sources on her life.

“My passion as an artist is to dig into history, places, and people who were forgotten. That is what attracted me the most to this inspiring woman, which lead me to have my first exhibition in Egypt about her,” Guirguis added.

The artist also believes that her exhibition is a window to open a conversation about the history of feminism in Egypt and the Middle East, bringing back the shining figures who faded over the years, as people got caught in modern struggles which brought people a different aspect of the definition of  feminism.

The exhibitions showcase some of Shafik’s rare publications, chronicled at the AUC library, as well as few rare pictures of Shafik’s famous march which demanded women’s rights to vote, which are all shown in Guirguis’ drawn portraits.

The exhibition is named after Shafik’s feminist organisation, Bent El-Nil, which was also the name of the journal she published throughout her life. 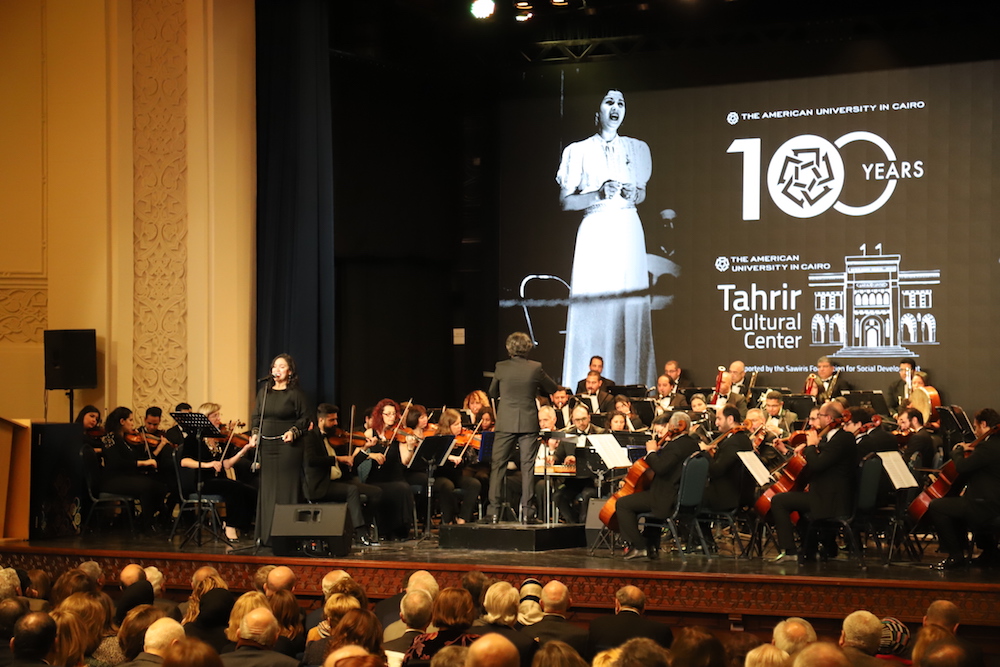 With dozens of portraits at the exhibition, almost none of them features Shafik with her human features or looks for people to recognise her. Instead, the portraits depict various shapes of flowers, which are simply drawn and coloured with various vibrant colours.

When she was asked about it, Guirguis explained that it was due to her belief that “How we look gets in the way of what we see, which was a part of Shafik’s story.”

“There were several times when Shafik’s beauty and elegance got in the way of her accomplishments, as she was always perceived with a typical eastern look,” Guirguis explained, adding, “For me, making an exhibition about her was not about depicting her physical features. However, it was more of me honouring her work through portraits which I believe translate her poems and art work.”

As an artist, Guirguis believes that abstract art allows her to talk about people’s accomplishments in the world, regardless what they look like.

The bright colours drawn at the portraits are a combination of Guirguis’ eastern culture, where she comes from, and the Western lifestyle, as she spent almost all of her life in a western country. The portraits’ selected colours were inspired by Shafik’s life details.

“Shafik talked about the Nile River in most of her poems. She was also frequently photographed alongside it, so the colour blue was one of the most applied colours in my paintings,” Guirguis explained.

From her point of view, bright colours resemble the life of a woman who fought in public to guarantee women’s rights, yet she was never accredited for it in history.

“Unlike Huda Shaarawy, who fought for women’s right inside the house, Shafik roamed the streets. The motifs were all about the colours of public places, which are vibrant and bright,” she pointed out.