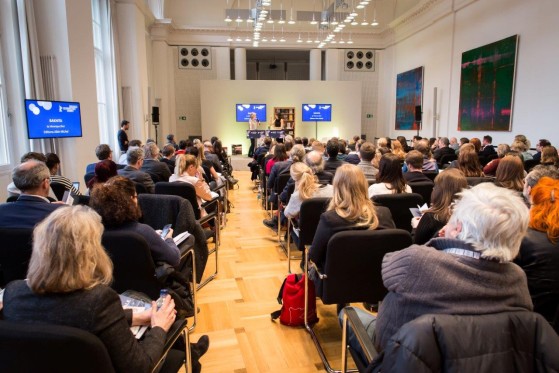 The initiative of Books at Berlinale, a co-operation with the Frankfurter Buchmesse, presented on Sunday 12 new and notable literary works that lend themselves perfectly to adaptation for the screen.

At the pitch event, which has been showcasing promising new publications and bestsellers since 2006, film producers came into contact with the renowned, internationally active publishers and literary agents who hold the rights to these works.

The over 160 submissions received from more than 30 countries this year represented a new record number of applications, topping all previous editions of the event.

Festival Director Dieter Kosslick, among those originally responsible for the creation of Books at Berlinale, said that he is pleased to note how the initiative has developed. “Our idea was and still is to present a curated selection of excellent books from around the world which are particularly suited to screen adaptation as a basis for bringing producers into contact with representatives from the publishing branch. It is wonderful that ‘Books at Berlinale’ is still continuing to grow and experience even greater popularity in its 14th year of existence.”

From Norway, guest of honour at the Frankfurter Buchmesse later this year, comes the bestseller Keep Saying Their Names (original title: Leksikon om lys og mørke) by Simon Stranger. The rights for the novel were successfully sold for editions in 15 languages within a very brief period of time. The book, to be presented by the Oslo Literary Agency, was honoured with the Norwegian Booksellers’ prize in November and has delighted critics and readers alike.

The Italian novel Sangue giusto by Francesca Melandri, which treats Italy’s colonial past, was recently celebrated by the magazine Der Spiegel as their International Novel of the Year for 2018.

Dance or Die, the moving true story of Ahmad Joudeh, who held onto his dream of dancing against all odds, faced with the war in Syria and the threat of extremists, is an impressive testament to the power of peaceful resistance through art.

The renowned British agency The Artists Partnership, which represents authors, screenwriters, and directors, will be presenting South Korea’s bestseller of the year with The Good Son, a thriller from South Korean, Queen of Crime, You-jeong Jeong.

Benoîte Groult’s 1988 novel Salt on Our Skin already became the object of a prominent screen adaptation shortly after its publication. Now that the film rights are once again available, the book, which has sold over one million copies in Germany alone, is ripe for re-adaptation for the cinema.

Also among the selected works is one of the Swiss Diogenes Verlag’s leading spring titles, Love in Case of Emergency by German author Daniela Krien. Germany is also represented with The Wannsee Murder, a crime story set in 1968 Berlin which also serves as a portrait of a pivotal moment in German history, and Kathrin Weßling’s novel Great, and You?