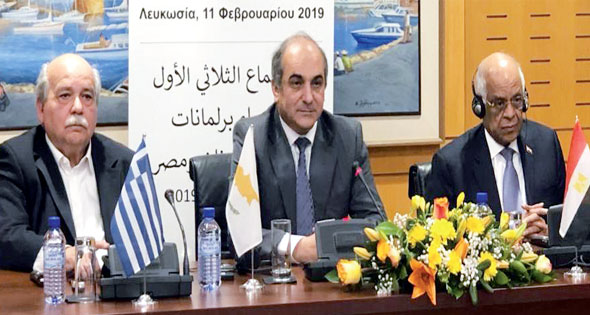 Egypt’s Parliament speaker, Ali Abdel Aal, headed to Cyprus on Saturday for a two-day visit in order to participate in a tripartite summit with the heads of the Cypriot and Greek Parliaments.

The meeting between the parliamentary officials marks the first of its kind, according to the Secretary of the parliament’s foreign relations committee, Tarek El-Khouly.

“The summit will be held on Monday as an implementation of the recent meeting between President Abdel Fattah Al-Sisi, the Greek Prime Minister, Alexis Tsipras, and the President of Cyprus, Nicos Anastasiades in October,” El-Khouly said.

Abdel Aal, accompanied by a high-level delegation, will attend meetings of the Parliamentary Assembly of the Union for the Mediterranean at the European Parliament.

Egypt has strong ties with Greece and Cyprus, as in November 2014, the three countries started a tripartite cooperation mechanism, while several rounds have been held so far. In April 2018, the first phase of ‘Nostos – The Return’ was held in Alexandria, while the second phase took place in London in October 2018, where a conference for the physicians of the three communities was also held.

The third phase of the Nostos programme, implemented in the framework of the trilateral cooperation between Cyprus, Greece, and Egypt on diaspora issues, is expected to be held in Australia at the end of March.