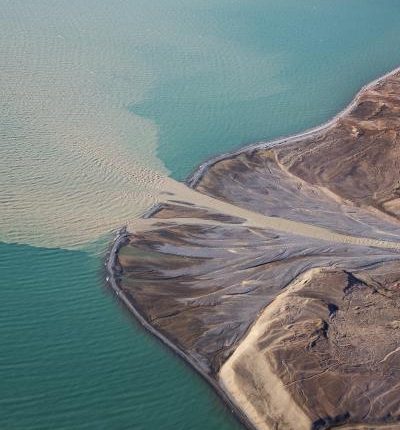 Despite its bad impact, however nations can also adapt and benefit from some of climatic change effects. One of the most affected places of climate change is the Arctic island, Greenland.

An international team revealed in a new study that the melting glaciers in Greenland leave deposits and river sediment along its shores. Findings of the study were published on Monday in the journal Nature Sustainability.

These sediments were identified by researchers as one of the unforeseen economic opportunities for the Arctic nation: exporting excess sand and gravel abroad, where raw materials for infrastructure are in high demand.

According to the study which was conducted by researchers from CU Boulder, the University of Copenhagen, Arizona State University and the Rhode Island School of Design, the melting Greenland ice sheet delivers an enormous amount of sediments to the coast.

While demand has only increased thanks to global urbanisation and infrastructure investments, the global sand reserves have been rapidly depleted in recent decades.

“In the study we show that Greenland could diversify its economy towards export of its sand resources and the potential impacts on the environment and local way of life,” Lars Lønsmann Iversen, a research fellow at Arizona State University’s Julie Ann Wrigley Global Institute of Sustainability told Daily News Egypt.

“Mette Bendixen-the first author of the study-started working with coastal dynamics in Greenland in 2009 as part of her PhD, I joined the work in 2014. We started working on the published study in March 2018,” Iversen said.

The researchers estimate that the amount of sand delivered to Greenland’s coast each year has a market value equivalent to more than half of the Greenland’s gross domestic product ($2.22bn in 2015) and this value is expected to double within the next 25 years if the global sand prices continue to increase, according to Iversen.

About 8% of the annual sediment contribution delivered to the global oceans comes from the Greenland ice sheet and with continued global warming, this number is expected to increase.

The paper focused on the struggle of arctic nations such as Greenland with the ongoing impacts of climate change, particularly an overreliance on now-vulnerable commercial fisheries and few other large industries.

For years, Greenland has worked on diversifying its economy through mining, oil extraction, and tourism, but progress has been slow, as the country still reports a 10% unemployment rate, and persistent revenue shortfalls.

But the scene is not completely good as some scientists believe that removing this sand could have negative impacts on the environment. The current study itself points out that sand exploitation could be controversial, as it would potentially interfere with the pristine Arctic landscape.

So the researchers recommend a careful assessment of the environmental impact and implementation in collaboration with the Greenlandic society.

Iversen told DNE that the study is a forward-looking in perspective and thereby solely relies on already published knowledge. “However, the paper builds on our research on coastal change in Greenland as a response to the melting of the Greenland ice sheet (we are a collective group of geologist, geographers and ecologist),” he said.

In 2017 the researchers published a study in Nature showing the coast of Greenland is expanding as a consequence of a melting ice sheet and diminishing arctic sea ice cover.

“Yes, certainty,” Iversen said responding to DNE’s inquiry about if there are any points in the study that he believes were not discussed enough in the paper, and whether they are still working on the topic.

“Our results are somewhat forward-looking. Still a great deal of uncertainty exists around what impacts sand mining would have on the local environment and communities.” he said, adding that future research will be essential to document the persistence and quality of sand delivered to the coast and how sand mining impacts local ecosystems and associated ecosystem services.

Furthermore, profitability will be determined by the international market value of sand and the costs of extraction and transport, which may affect whether and when Greenland elects to develop this industry. Detailed market analyses focusing on extraction cost and shipping expenses still needs to be carried out to ensure that the sand industry will be a competitive business with the global market, according to Iversen.

“We are actively initiating research on the future existence of these sand resources as the Greenland ice sheet continues to melt and what role these sand outlets play for local fjord ecosystems,” he explained. The team is also trying to develop collaborations with economist and local agencies in Greenland to better understand the market values, future consumer sources, and local impacts/inclusion of any sand mining in Greenland.

Extraction of sediment (dredging) will surely have some effects on the local environment, the researcher explained. However, much of the disturbance to be caused by dredging does resemble the current condition along the coastal outlets in Greenland.

Sand extraction via dredging of marine sediments shares many of the same disturbance consequences for the local environment as those mentioned above. Excavation, transportation, and disposal of fresh unconsolidated material enhance dispersal of sediments into the water and changes in seabed surface and turbidity from dredging plumes, ultimately affecting local ecosystems.

Thus, direct removal of bed sediments could locally enhance or even amplify the ongoing changes in ecosystem dynamics along the coast of Greenland.

But this is something that needs much more work, and environmental impact assessments of sand extraction will be needed in order to secure a minimum impact on the local ecosystems. It is also important to note that the majority of the sand from the Greenland ice sheet comes from a handful of outlets in the south western part of the country. In practice, it might only be one or two places that would be of interest for sand mining.

Could EU energy security be guaranteed without Nord Stream 2?