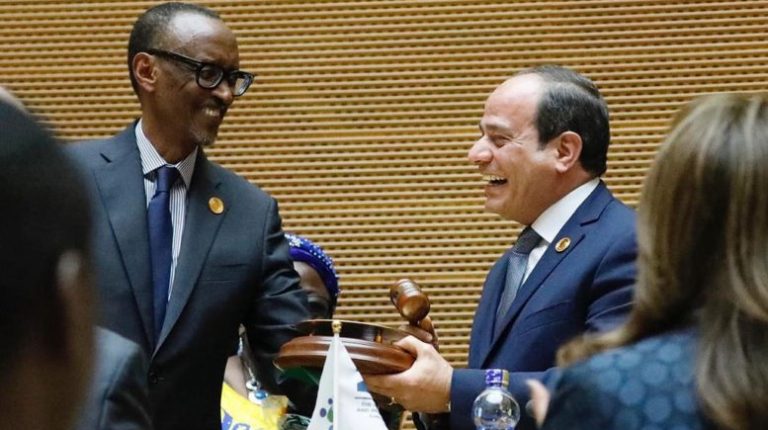 On Wednesday’s newspaper issues, Egyptian writers picked up several ongoing topics including the 32nd African Union (AU) Summit in Addis Ababa, and the amendment of the 2014 Constitution.

Khaled Mery, the editor in chief of the state newspaper Al-Akhbar, praised the speeches of President Abdel Fattah Al-Sisi during the summit, maintaining that the AU sessions draw a future road map in order to enable Africa restore its usurped rights in having two permanent seats at the UN Security Council which have the “veto power.”

Mery suggested that significant issues were addressed during the summit, including security, stability, refugees, poverty, education, and armed conflicts in the continent. He added that the AU, under Egypt’s leadership, will seek to maintain security, end conflicts, and achieve sustainable development.

Similarly, in Al-Akhbar, Karam Gabr wrote that Al-Sisi completes the path of the former notable Egyptian leaders, adding that the late President Gamal Abdel Nasser paved the road, when he called for economic cooperation between African countries and the creation of a joint market.

Gabr referred to Al-Sisi’s efforts on counterterrorism, maintaining that the Egyptian experience in fighting extremism is drawing global attention, despite of what he described as “lies regarding the human rights record” in Egypt.

Meanwhile, Mahmoud Mohamed Ali of Al-Ahram daily cited Egypt’s chairpersonship of the AU as a significant event, as Al-Sisi’s Egypt is improving and enhancing its international and regional relations.

Ali noted that Egypt eventually managed to restore its AU membership, its position, and its principle role in Africa.

On the other hand, Mostafa El-Feki of Al-Masry Al-Youm pointed out that the constitution is the most important and effective document in the country, however, he argued, it is not a “idol,” to be worshipped.

El-Feki stated that the 2014 Constitution was drafted in a very “blurry” time, and resulted in two uprisings, the 25 January Revolution in 2011, and the 30 June Uprising. However, things have changed now, El-Feki said, adding that considering a number of constitutional amendments come as no surprise, due to the need to come up with new updates in the political scene.

EBRD hiding head in the sand on Egypt democracy