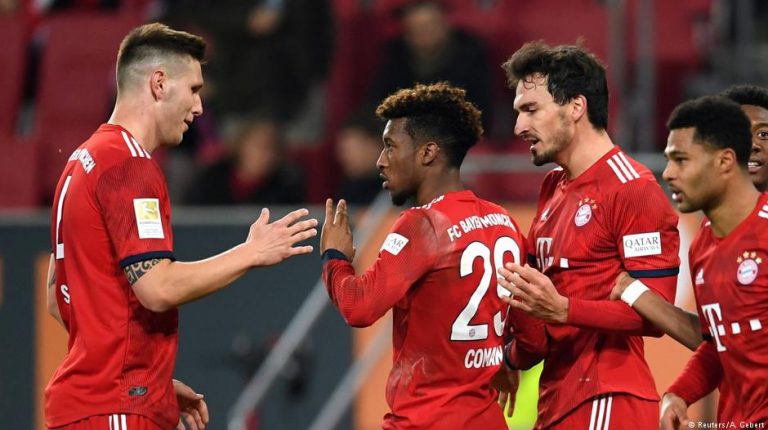 Kingsley Coman struck twice as Bayern Munich recovered from a Leon Goretzka own goal after 13 seconds to get all three points in Augsburg. But Liverpool will be watching on, aware of the chinks in Bayern’s armor.Augsburg 2-3 Bayern Munich
(Goretzka og 1', Ji 23' — Coman 17', 45'+3, Alaba 53')

Bayern Munich should be concerned ahead of their heavyweight Champions League showdown with Liverpool. Yes, Bayern got three points in Augsburg, and yes, they closed the gap to leaders Borussia Dortmund to two points, but Friday proved that Bayern's weaknesses outstrip its assets by a considerable margin.

Friday night's hosts, Augsburg, went into this game having lost eight of their previous nine Bundesliga games. That figure is now nine in ten, yet Bayern's slapdash defending made them look like an attacking force to be reckoned with. Leon Goretzka set Augsburg moving after just 13 seconds when he inadvertently steered the ball into his own net, raising hopes of a rare Augsburg win against their Bavarian neighbors.

Bayern leveled through Kingsley Coman but opened the door for Augsburg again when Philipp Max crossed for Ji Dong-won, who received the ball after a failed clearance by Niklas Süle. Ji did the rest. Augsburg took their chances in clinical fashion and deserved their lead, but with the greatest respect to the Bundesliga strugglers, once can only imagine what Sadio Mane, Roberto Firmino and Mohamed Salah will do to this defense. Jürgen Klopp must be licking his lips.

Coman leveled with the final kick of the first half and David Alaba struck what proved the winner with the game's only moment of real quality, finding the bottom corner with a beautiful strike after he was spotted by Coman. Those two players have proved consistently in recent weeks during Bayern's revival as a title contender that they are Bayern's key goal threats, along with Serge Gnabry.

Bayern have found ways to win games like this even when they're off the pace, largely down to the individual sum of their parts. Alaba proving the savior on this occasion. But for Bayern to overcome the slick machine that is Klopp's Liverpool, they need a new defense. Mats Hummels and Niklas Süle are too slow and too cumbersome to handle any team with pace and power, as we saw when Bayern slumped to defeat in Der Klassiker.

Unfortunately for Bayern, Liverpool have one of the best attacking trios in Europe and the scouting reports being sent back to Anfield on Friday night will report the weaknesses that everyone is aware of but no one seems willing to address. On this evidence, it could be a long night for Niko Kovac's men on Tuesday.