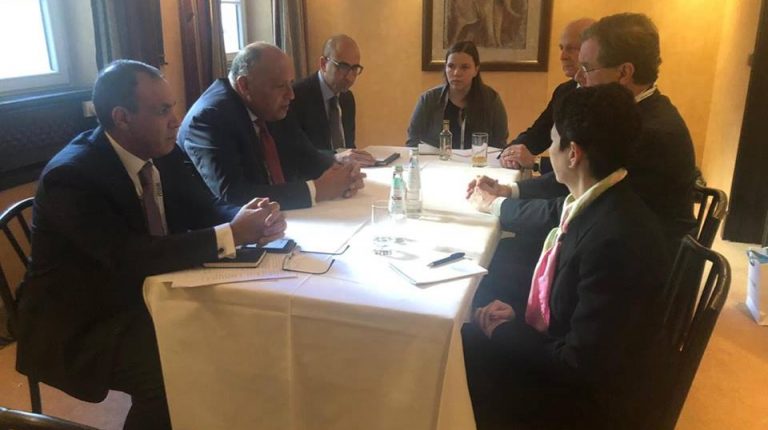 During the Munich Security Conference (MSC), Egypt’s Minister of Foreign Affairs, Sameh Shoukry, met with the Japanese and Armenian counterparts, and with a delegation of the American Jewish Committee.

The meeting with the Japanese counterpart, Tarō Kōno, focused on viewing the updates of the bilateral relations between the countries, and discussed the joint coordination for the upcoming Tokyo International Conference on African Development (TICAD), and the G20 summits under Egypt’s current chairpersonship of the African Union.

The ministry’s Spokesperson, Ahmed Hafez, said that the Egyptian minister praised the progress of the Egyptian-Japanese relations witnessed during the past five years, which he depicted as a continuation for their historic ties. He stated, “I would like to thank in particular the cooperation between the two countries in the field of education, which Egypt and the president personally view as one of the most important areas of cooperation.”

He also expressed the importance that Egypt attaches to the participation of the Japanese Prime Minister in the opening of the Grand Egyptian Museum, which is a witness to the distinguished relations between the two countries.

The meeting further included a discussion on the overall situation in the Middle East, with the Japanese Foreign Minister affirming the continued support of his country to Egypt.

During his meeting with his Armenian counterpart, Zohrab Mnatsakanyan, Shoukry confirmed the special relations between Egypt and Armenia, where Egyptian citizens of Armenian origin contributed toward Egypt’s political, economic, and cultural development over the years.

Shoukry also expressed Egypt’s aspiration to increase the frequency of exchange of high-level visits with Armenia at all levels, noting the importance of the continued coordination and consultation at all levels.

The meeting comes as part of the Egyptian Foreign Ministry’s efforts to strengthen the coordination and the cooperation frameworks with various partners worldwide, said Hafez, noting that the meeting also touched upon the development of relations between the two countries during the last period, particularly the results of the fifth session of the joint economic committee which was held in Armenia in September 2017.

The two ministers hailed the positive developments and expressed their hopes to hold the joint committee in Cairo and to plan Shoukry’s visit to the Armenian capital soon, and they also agreed to assign new ambassadors to Cairo and Yerevan in order to activate the bilateral relations between the two countries.

As for the meeting with the US delegation, the two sides reviewed the progress of the Egyptian-US relations at the beginning of their talks, in which their meeting discussed the ways to resume the peace process in the Middle East and the Egyptian efforts to achieve Palestinian reconciliation.

They also discussed the updates of the Palestinian cause and the efforts to solve it, as well as the resumption of the peace negotiations between Palestinians and Israelis in accordance with international conventions.

Shoukry also stressed the importance of ensuring the establishment of an independent and sovereign Palestinian state with East Jerusalem as its capital.

The Egyptian minister concluded by emphasising the role played by the various US departments in activating and strengthening the US relations with Egypt, and highlighted the importance of intensifying the coordination and political consultation on regional issues, especially in light of the successive crises and the increasing challenges and risks facing the Middle East.