International institutions account for 30.7% of Egypt’s total foreign debts by end of June 2018, according to the Central Bank of Egypt (CBE).

In its recent monetary policy report, the CBE said that there are $23.1bn of debts owed to Arab countries, including Saudi Arabia, the United Arab Emirates, and Kuwait, equivalent to about 24.9% of Egypt’s total foreign debt by the end of June 2018.

It added that the government has alone acquired 51.4% of total foreign debts, while banks’ debts reached $6bn.

According to the CBE, the short-term external indebtedness scored $12.283bn at the end of June 2018, which is about 27.8% of the foreign exchange (FX) reserves and 13.3% of Egypt’s total foreign debt.

Aiming to place Egypt’s external position on a more sustainable footing and encourage foreign investors back into the country, the CBE determined on 3 November 2016 to unpeg the Egyptian pound, allowing its value to float. Accordingly, bid and ask exchange rates would be determined by forces of demand and supply.

By floating the pound, the CBE would eventually be able to fully dismantle FX restrictions, and reduce disruptions to activity. Such a courageous move aims to quash the currency parallel market and attract the much-needed foreign capital.

This decision helped replenish international reserves through the official market.

Egypt’s transactions with the external world recorded an overall balance of payment (BOP) surplus of about $12.8bn during the FY 2017/18 against about $13.7bn in the previous FY.

The capital and financial account recorded a net inflow of about $22bn against about $31bn.

The decline in the current account deficit was mainly traceable to some developments, namely the services surplus surged by 98.1%, recording about $11.1bn, net unrequited current transfers scaled up by 21.2% to about $26.5bn, the trade deficit remained stable at about $37.3bn, and the income balance ran a deficit of about $6.3bn.

According to the CBE, the increase was a result of the rise in foreign currencies by about $11bn and in special drawing rights (SDRs) by $2bn. During the report’s preparation, NIR reached $44.5bn at end of October 2018.

Foreign currency deposits with banks increased by 4.5% during the period concerned, reaching $40.2bn at end of June 2018. As a percentage of total deposits, they made up 23.8 %.

The external debt remains within manageable limits, and its position continues to have a favourable structure, as 86.7% of the debt are medium- and long-term. 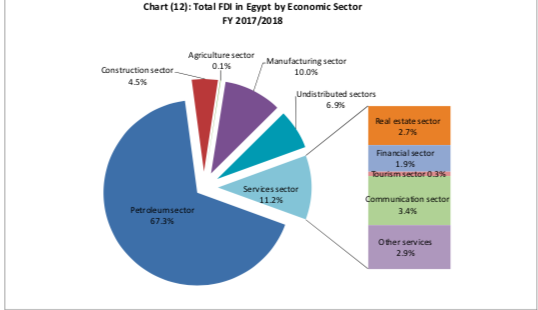 The CBE stated that Egypt’s transactions with the external world recorded an overall BOP surplus of about $12.8bn during FY 2017/18 against about $13.7bn in the previous FY. The current account deficit narrowed by 58.6 % to about $6bn from about $14.4bn. The capital and financial account recorded a net inflow of about $22bn against about $31bn.

Moreover, the CBE noted that the decline in the current account deficit was mainly traceable to the services surplus which surged by 98.1%, recording about $11.1bn against about $5.6bn, and net unrequited current transfers scaled up by 21.2% to about $26.5bn versus about $21.8bn, while the trade deficit remained stable at $37.3bn, and the income balance ran a deficit of about $6.3bn against about $4.6bn.

“Hereunder is the geographical distribution of merchandise exports and imports: Egypt’s main trade partners in terms of exports were Italy; the UAE; the US; the UK; Turkey; India; Saudi Arabia; Germany; Switzerland, and Spain,” the report stated.

These countries combined, accounted for some 57.9% of total exports.

As for imports, Egypt’s trade partners were China; Saudi Arabia; the UAE; Russia; Germany; the US; the UK; France; Switzerland; Turkey; Italy, and Brazil.

These countries combined, accounted for some 52.4% of total imports.

Other services receipts increased by 0.2% to about $2.34bn against about $2.33bn, due to the increase in the receipts of constructions services, the agencies commissions, advertising and market research services. 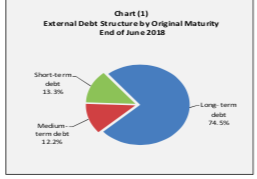 On the other hand, government services receipts decreased by 18% to $636.7m against $776.4m, due to decrease in other governmental receipts.

Other services payments also increased by 7.6%, to about $4.9bn against about $4.6bn, driven by the increase in the amounts transferred abroad by foreign petroleum companies, communication services, royalties and license fees, computer services, and subscription to magazines and newspapers.

On the other hand, travel payments fell by 10.5% to about $2.5bn against about $2.7bn, due to the decline of e-card payments abroad.

The capital and financial account recorded a net inflow of about $22bn in FY 2017/18 (against some $31 bn), as an outcome of several points, including total FDIs inflows registered about $13.2bn, while total outflows recorded about $5.4bn. Accordingly, net inflows of FDIs in Egypt registered about $7.7bn. Noteworthy, net inflows for the oil sector investments increased by 12.2%, to post about $4.5bn.

The sectorial breakdown of total FDIs inflows shows that the oil sector has the biggest share (67.3%). As for the other sectors, the majority of FDIs went to the services sectors, with 11.2% distributed to the communication and information technology, 3.4% to other services sectors, 2.9% to the real estate sector, 2.7% to the financial sector, and 1.9% to the tourism sector (0.3%).

The share of the manufacturing sector was 10%, the construction sector was 4.5%, the agricultural sector was 0.1%, and the remaining portion was acquired by undistributed sectors.

Portfolio investment in Egypt retreated, registering a net inflow of $12.1bn (versus $16bn). This was largely ascribed to the decrease in foreigners’ investments in Egyptian treasury-bonds (T-bonds), recording net purchases of about $6.5bn (against about $10bn), as a result of the withdrawals of foreign investors from the emerging markets (EMs).

Medium – and long-term loans and facilities recorded net disbursements of about $7.9bn (against about $8bn).

Short-term suppliers’ credit realised net disbursements of about $2.4bn (against about $1.7bn). 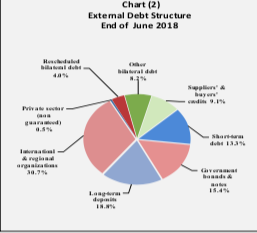 To summarise, the CBE stated that the tourism sector performance during 2017/18 points to an increase in tourist arrivals and nights and also shows a hike in receipts when compared with the previous year levels. Average expenditure per night increased from $86.1/night in the previous year to $95.6/night in 2017/18.

The tourism sector performance during the fourth quarter (Q4) of 2017/18: according to the BOP data during Q4 2017/18, tourism receipts recorded an increase of $1015m or 65.95% to $2554m compared with the same period last year. This is due to the 8.4% increase in the average expenditure per night, in addition to the 6.6% increase in average nights spent per visitor.

Tourists coming from Africa and Middle Eastern countries topped the list in terms of the length of stay per visitor with 17.6 and 12.9 nights per visitor, respectively.

As regards hotel sector performance and its regional comparison during the first seven months of 2018, Cairo hotels experienced a noticeable increase in terms of ‘revenue per available room’ which reached 20.2% compared with the same period last year.

It also witnessed a shift from diversification toward concentration in favour of the European region, as the Herfindahl-Hirschman Index (HHI) reached 0.6 in 2013/14. However, the index then fell down this year reaching 0.41 indicating more diversity, yet less diversified than the previous year which reached 0.35.

This draws attention to the fact that necessary steps should be taken towards a more diversified tourism market to be able to mitigate any future demand shocks. Nevertheless, Egypt’s market is still more diversified when compared to some neighbouring countries in the Middle East and North Africa (MENA) region. 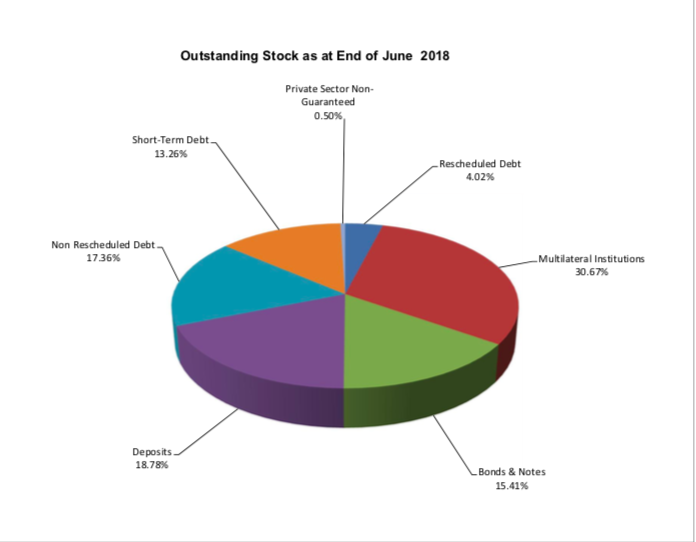 The increase in tourist arrivals resulted from more visitors coming from the European countries, 70.62% of total increase, Middle East region, 16.92%, African countries 7.11%, the Americas, 2.61% and Asia and the Pacific region 1.4%.

During Q4 of 2017/18, data shows that visitors stayed more nights, registering an average of 10.4 nights per person, compared to 9.8 nights per person in the corresponding quarter a year earlier.

Tourists coming from Africa headed the list in terms of the length of stay per visitor with an average of 17.6 nights.

In order to make a sound judgment on hotel sector financial performance over the time and across key Arab cities, the CBE combined occupancy rate with revenue per available room (RevPAR).

The revenue per available room provides a convenient snapshot of how well a hotel is filling its rooms, as well as how much it is able to charge. As a matter of fact, there is a sharp increase in RevPAR during the first seven months of 2018, as compared to the same period of the previous year. 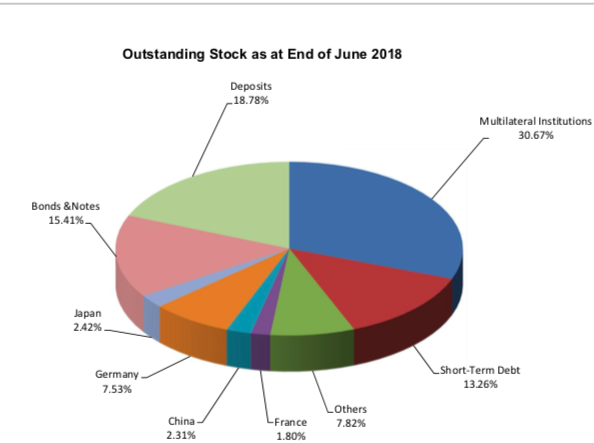 With regards to NIRs, the CBE’s decision to unpeg the Egyptian Pound led to the steady accumulation of foreign currency reserves through the formal channels.

The increase was a result of the rise in foreign currencies by about $11bn and in SDRs by $20bn. During the report’s preparation, NIRs reached $44.5bn at end of October 2018.

Foreign currency deposits with banks increased by 4.5% during the period concerned, reaching $40.2bn at end of June 2018.

External debt recorded $92.6bn at end of June 2018, up by 17.2% (compared with about $79bn at end of June 2017). This increase came as a result of the rise in net disbursements of loans and facilities by $13.2bn, alongside the depreciation of most currencies of borrowing versus the US dollar by $0.4bn.

Long-term deposits which have been placed at the CBE by some Arab countries posted $17.4bn (18.8 % of total debt).

Non-guaranteed debt of the private sector registered $459.9m (about 0.5% of total debt).

Measuring the currency composition of Egypt’s external debt is an important indicator that sheds light on the external debt exposure, to currency markets’ volatility.

The currency composition of external debt indicates that the US dollar is the main borrowing currency, with a value of $58.8bn. This includes other outstanding obligations in US dollar to creditors other than the US (such as the IMF, African Development Bank (AfDB), and the International Bank for Reconstruction and Development (IBRD).

As for the external debt in terms of international comparison, the debt is within manageable limits, based on IMF classification, comparing Egypt’s key debt indicators with those of other regional country groups. Egypt’s debt stock to the GDP represented 37% at end of June 2018 (65.1% for Emerging and Developing Europe and 44.7% for Latin America and the Caribbean).

Egypt’s short-term external debt to total external debt at end of June 2018 represented 13.3% (21.1 % for Emerging and Developing Europe, and 14.2% for Latin America and the Caribbean).

On 3 November 2016, the CBE took the decision of the liberalisation of the Egyptian pound exchange rate, to be quoted according to the dynamics of supply and demand.

This decision came as part of the economic reform programme.

Market rate: at end of June 2018, according to the foreign exchange market (buying price), the Swiss franc decreased by 4.7%, the US dollar, the Saudi riyal, and the UAE dirham decreased by 1.1 % each, and the Kuwaiti dinar decreased by 1.0 %.

AfDB has supported Egypt with $1.5bn over past 3 years