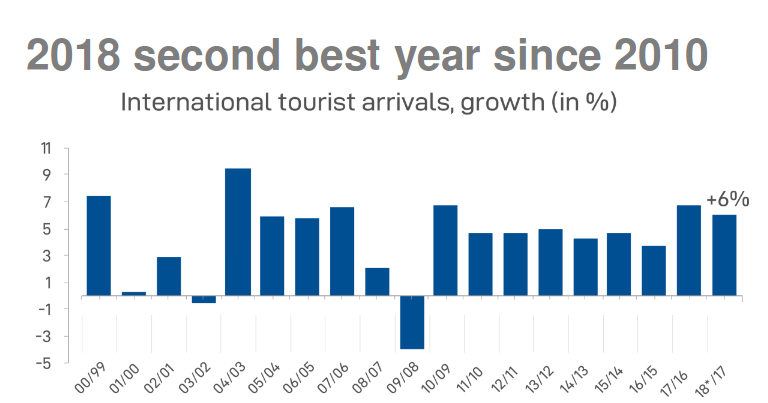 The United Nations World Tourism Organization (UNWTO) forecasted in its last report a positive outlook for tourism in 2019, expecting that the Middle East will witness a growth of 4 – 6% in terms of international tourist arrivals.

UNWTO also expected the international arrivals to grow by 3 – 4% this year.

The report explained that this positive outlook is driven by the stability of fuel prices which reflected affordable air travel, and driven also by the better air connectivity, facilitating the diversification of source markets.

At the same time, the global economic slowdown, the uncertainty related to the Brexit, and geopolitical and trade tensions may prompt a “wait and see” attitude among investors and travellers.

The report noted that 2018 was the second best year since 2010 in terms of International tourist arrivals.

It explained that the worldwide international tourist arrivals (overnight visitors) increased by 6% to reach 1.4 billion people in 2018, clearly above the 3.7% growth registered in the global economy.

Concerning Egypt, the Minister of Tourism, Rania Al-Mashat, declared earlier that the number of tourists to Egypt increased by 40% during the first nine months of 2018, compared to the same period last year.

She also revealed to Daily News Egypt that during the period from January to October 2018, European tourists accounted for 61% of the total number of tourists who visited Egypt during that period, while tourists from the Middle East represented 21.68%, Africa with 7.15%, Asia with 5.62%, and America with 3.94%, while other countries represented only 0.61%.

Where can one travel in times of terror?

Tourism is booming in Cuba