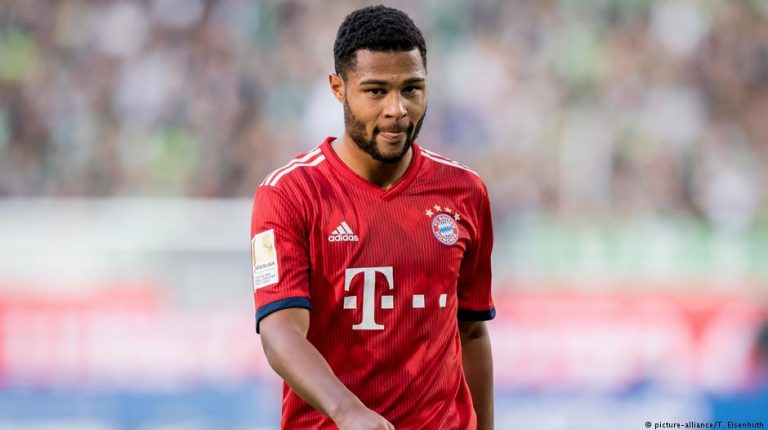 After years of Bundesliga domination, Bayern Munich are in a rebuild and Serge Gnabry is aiming to be part their long-term plans. He spoke to DW about facing Liverpool and learning from veteran teammates at Bayern.DW: Serge Gnabry, you've experienced quite a few things and clubs in your still young career and now you are just about to get your first taste of Champions League football as Bayern Munich enter the knock-out stage against Liverpool, a side that reached the final last season…

Serge Gnabry: It's my first match in the knockout stages, so I'm looking forward to it. We know it's going be a tough match. When we saw the draw with Liverpool, we thought it was the hardest possible. So for sure it will be a great match. But we are Bayern Munich. We have a great team we have a great spirit. So I don't think there's any way that we should hold back and not go there with the confidence to be able to win the game.

After years of domination in the Bundesliga, did you ever think Bayern would be trailing Dortmund at the top the Bundesliga table in your first season at Germany's most successful club?

Serge: I wish we were in Dortmund's position at the moment, I want to win my first Bundesliga trophy this season. But we know we've got a lot of work to do to achieve that. Dortmund are having a great season, so you have to give them the credit that they deserve. We've slipped up a couple of times and we need to do better. Hopefully in the end we can come out on top.

Are Dortmund a topic of conversation in Bayern's dressing room these days?

Of course they are, I mean no one can deny that they out in front. It makes you are a little more eager to hear their results. But watching what Dortmund are doing doesn't help us – we need to do our job. We need to focus on collecting points and then in the end, hopefully we'll overcome them

You're still only 23, but you have already spent time with a number of professional clubs. So how does training at Bayern – with all of that talent – compare to practice sessions at your previous clubs?

It's intense. With all due respect to my previous clubs, the quality here is simply at a different level. Of course it isn't easy, and the intensity and quality took a little getting used to. Once you get out there (on the training pitch), you learn to adapt and you gain self-confidence.

Have you been learning a lot from the veterans you now share a dressing room with?

For sure. These players have achieved a lot of things that I haven't – they've won league championships, World Cups, the Champions League, so I'm trying to learn as much as I can from them – including learning about character and how to handle things. It's good to be around them.

What's different about playing for Bayern?

We like to say the jersey weighs more heavily. It's a big club it has a lot of history and a lot of fans. Obviously there's a certain amount of pressure because they've won six championships in a row, but it's an honor to put the shirt on every single time. It was a boyhood dream.

Does one need a big ego to play for Bayern?

You have to have an ego to play for any club; you have to look after yourself. Of course we're playing a team sport, but at the end of the day if you do a better job (as an individual) it helps the team. But the Bayern DNA is "Mia San Mia," ("we are we").

It's a big honor to play for your country. Our last game was against Holland and we're going to face them again in March. We need to step things up, I don't know how we ended tying them 2-2 in November (UEFA Nations League match in Gelsenkirchen). We should've won that match. We need to put in the same kind of performance as we did last time, but we just have to make sure we don't let the game slip out of our hands this time.

Serge Gnabry, 23, was born in Stuttgart to an Ivorian father and German mother. Gnabry played his youth football at several clubs in the region, eventually joining VfB Stuttgart's youth program. At 16 he joined Arsenal's youth setup and did see first team action, but never made the breakthrough he was looking for. In 2016 he returned to Germany with Werder Bremen, signing with Bayern Munich a year later. After a year on loan at Hoffenheim, he returned to Bayern in the summer of 2018. He has represented Germany at several youth levels, as well as the senior national team.

The interview was conducted by Kres Harrington