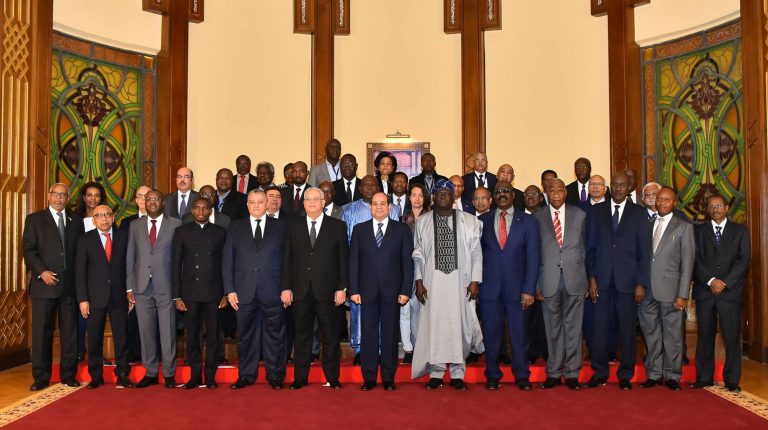 Egypt’s President Abdel Fattah Al-Sisi stressed the importance of raising awareness about the role of law in countering terrorism and extremism in African countries, noting that terrorism is one of the main challenges the continent is facing currently.

During his meeting with heads of the African supreme constitutional courts on Tuesday, the president urged issuing special laws to counter terrorism, being one of the basic human rights, according to a statement by the presidency’s spokesperson, Bassam Rady.

Al-Sisi praised the pivotal role of the African constitutional courts in providing the judicial protection for the African citizens, given their strong judiciary experience, asserting that Egypt is looking forward to benefit from all African judicial schools, particularly in the light of Egypt’s presidency of the African Union.

Moreover, the president met on Tuesday with the US committee that supported awarding the Congress Gold Medal to Egypt’s late president Anwar Al-Sadat. During the meeting, Al-Sisi stressed the importance of Egypt-US strategic relations, praising the keenness of the two countries on strengthening these relations.

Al-Sisi also praised the efforts of this committee’s members in issuing the law that awarded the medal to Al-Sadat. The medal is the highest US civilian honour awarded by the US Congress. It was given to international leaders, such as George Washington, Winston Churchill, Nelson Mandela, and Ronald Reagan.

During the meeting, Al-Sisi said Al-Sadat’s peace initiative reflected the civilisation of Egyptian people who realised that war was not an objective itself. He added that real peace should be based on the popular will, pointing out that solving the Palestinian cause and reaching peace in the Middle East will change the situation in the whole region and help in achieving development.