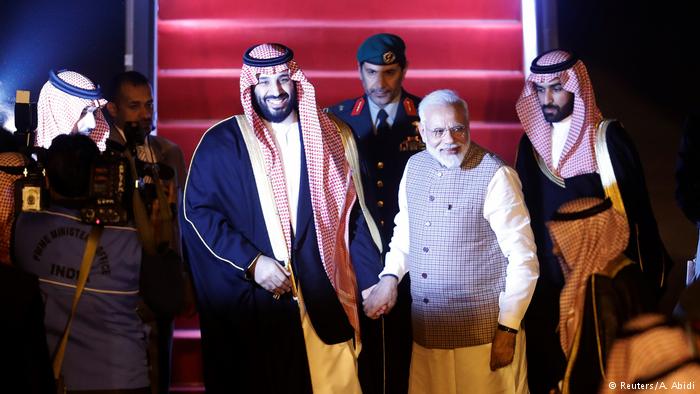 India’s Prime Minister greeted the Crown Prince, Mohammed bin Salman, upon his arrival to New Delhi, as both sides discussed the political and economic cooperation between the two countries.

The friendly greeting for the crown prince was marked as a “new chapter in bilateral relations” by the Indian Foreign Ministry on Wednesday.

Saudi Arabia is already India’s main supplier of crude oil, and ties are being extended beyond the energy sector to build a strategic partnership, India’s Foreign Ministry said last week. Bilateral trade is already worth $28bn.

India is hoping for an investment in its National Investment and Infrastructure Fund in order to build ports and highways. “Trade and investment, defence and security, including counterterrorism, and renewable energy,” were all on the agenda for the talks on Wednesday, the ministry said.

Saudi Aramco’s investments in Indian refineries, including the plans for a project to build a $44bn facility, are also expected to be discussed.

Tensions between Pakistan and India have flared after last week’s bombing in the disputed Kashmir region, which killed 40 Indian paramilitary police. India has accused Pakistan of being behind the attack.

Apart from trade, bin Salman’s office indicated that the crown prince would be attempting to play a diplomatic role in order to ease the tensions between the nuclear-armed neighbours.

“Our objective is to try to deescalate the tensions between the two countries, neighbouring countries, and to see if there is a path forward to resolve those differences peacefully,” Adel Al-Jubeir, the minister of state for foreign affairs, said in Islamabad on Monday.

Bin Salman was set to leave India for China on Wednesday night, where he is expected to announce further cooperation on Beijing’s Belt and Road Initiative for infrastructural development.

Bin Salman received a similar welcome in neighbouring Pakistan over the past few days, where he announced investments of $20bn. During his two-day visit, the crown prince was expected to sign deals worth billions. Reuters cited Saudi-owned Arabiya TV on Sunday saying agreements worth $20bn had been signed.

The economic cooperation between the two countries “is going to grow every month, every year,” the crown prince said at a joint press conference with Khan on Sunday. “We believe that Pakistan is going to be a very important country in the coming future and we want to be sure we are part of that.”

The deals are expected to include a $10bn injection of funds for an oil refinery complex in the nation’s southwest, a much-needed lifeline as Pakistan faces a struggling economy and an expanding deficit.