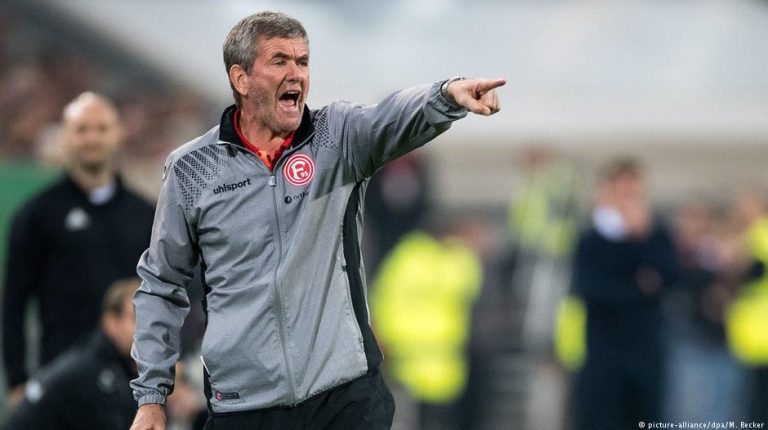 Friedhelm Funkel: It's been quite varied, but also quite successful. We got off to a good start, taking five points from the first five games, including that surprising win over Hoffenheim – but then we lost six games in a row. However, everyone kept their heads and we bounced back to win three in a row to end the first half of the season, including a big victory over Dortmund. We've also got off to a good start in the second half of the season, we're are now in a good position to avoid relegation.

After 14 matchdays things looked much different, with just nine points and in 18th and last place in the table. How did you turn things around?

It all started with our 4-1 home win against Hertha, our first after six defeats in a row. That's when we thought: "We can do it!" The victory against Dortmund gave us even more self-confidence, especially the way we won, because we didn't park the bus and it was by no means a lucky win.

You have opened up a 10-point gap between yourselves and 16th place, the relegation-playoff spot. What does that mean for you and the team?

It's simply sensational to be in this position. Prior to the season, we couldn't have dreamed of being above Schalke in the standings at this point. The lads deserve it.

Going into Matchday 23 you've played or coached in 801 matches in the Bundesliga. What does this number mean to you?

This number means a lot to me, to be honest. I've been very lucky to have stayed healthy and I have always had a great team and great comrades-in-arms by my side.

How has coaching changed over the decades?

The number of people on a coaching staff has increased dramatically. You have a lot of highly trained experts supporting you. You can't put much past me in terms of football and tactics, but in terms of training methods, psychology or medical care, it is very important for me to defer to others. This requires a lot of teamwork, but I was always a team player in my playing days and as a coach. Maybe that's one reason why I've managed to stick around in the Bundesliga for so long.

Does that mean that you've always been open to innovation?

Absolutely, you have to be. Our knowledge about football has developed enormously. Scientific stress testing is one example – no such thing used to exist. You made a gut decision on everything. You looked at a player and tried to figure out whether he was really injured or just pretending. These days, everything about professional players is monitored. We just have to look at their values and we know exactly how far a player ran.

Video analysis has also changed dramatically. We used to set up two VHS video recorders beside each other and compare game situations. It took hours. Today, our analysts do this in a matter of seconds. I think it has become better and more intense for everyone involved.

You've been in the game for a long time. What do you make of all the things that go on off the pitch, social media and the like? Do you get how younger players tick?

I'm not a fan of social media, but despite the generation gap, I believe I have a good feel for my players and can make a positive impact through my life experience and knowledge of human nature. We older folks don't need to know about those things (social media) so much, but we can prepare the players for different situations, helping them to keep their feet on the ground or build them up. Players today have many advantages, but they can't do anything without getting caught. We used go out on the town for a few beers and nobody noticed, nobody was filming it.

Players today deliberately make their off-pitch lives public – as we saw in the recent example of Borussia Dortmund.

When I heard that the Dortmund players had had a hairdresser come to their hotel the night before [the 3-0 Champions League defeat against Tottenham], I was uncomfortable with that. You don't win or lose because of that, I know that, but it takes away a bit of concentration. There is a bit of joking around instead of concentrating on the opponent. Professional footballers have so much time on their hands, they could have picked a different time to go to the hairdresser.

How difficult is it these days to find the right balance between the business of football and tradition?

Maintaining the traditional is becoming increasingly difficult. There's so much money in the game, but of course, that's what people wanted. We in Düsseldorf want to remain an independent club that can establish itself in the Bundesliga without major outside investors. Of course, it's becoming more and more difficult for a small club to stay competitive. Our role models are Mainz and Freiburg.

Friedhelm Funkel, 65, made his debut as a player for Bayer Uerdingen in 1973 before moving on to Kaiserslautern. He also started his coaching career at Uerdingen – in 1990. He has since coached several Bundesliga clubs, including Cologne, Eintracht Frankfurt and Hertha Berlin. He joined Fortuna Düsseldorf in the second division in March 2016, winning promotion last season. With 801 Bundesliga matches (320 as player, 481 as coach) he has equaled Felix Magath's record. Only Jupp Heynckes (1,038) and Otto Rehhagel (1,033) have played and coached more Bundesliga matches.

The interview was conducted by Markus Hoffmann